Initially, a club called Ostrovia existed in the city. It was established between 1922 and 1924 and dissolved in 1926. KSZO was established in 1929. The construction of the club's stadium began in 1931 and finished in 1934. As a result of the Nazi invasion of Poland, the club's activities ceased in 1939.

In 2012, the club declared bankruptcy. The same year, it was reorganized under the same name and badge.

KSZO joined the C klasa, the lowest level of regional leagues in Poland at the time, in 1932 gaining promotion to B klasa the same year. In 1934, the club was promoted to A klasa, the top regional level. In 1937, it was moved to the Kraków Regional Football Association as the regional association based in Kielce the club hitherto belonged to was disbanded.

Having resumed activity after World War II, the club participated in lower-level regional leagues. In 1950, KSZO (then called Stal) was merged with another local club, Związkowiec. The management of the steelworks decided to focus on building a better football team. [3] From the 1960s until the early 1980s, KSZO took part in third-level competitions several times. However, the club wasn't able to advance further or maintain their place for more than a few seasons.

In the early 90s, the steelworks became more committed to financing the club's activities. In 1990, the club was promoted to the III liga, the third level of Polish association football at the time, once again. Five seasons later, KSZO was promoted to the second tier for the first time.

In 1995/96, the first season after promotion to the eastern group of II liga, KSZO finished 13th out of 18 teams, avoiding relegation by just 3 points. However, at the end of the following season, the club was ranked second behind Petrochemia Płock and won promotion to the top tier of Polish football.

1997/98, the first season of KSZO in Ekstraklasa ended in relegation as the club only managed to finish 17th out of 18 teams.

Having returned to the second level, KSZO was fourth in the eastern group 1998/99. Next season, both groups were merged to create one 24-team second division. That year, KSZO was 12th. In 2000/01, the club finished second behind RKS Radomsko and was promoted to the top tier for the second time.

The 2001/02 season was played according to an unusual formula, the teams being divided into two groups ("A" and "B") of 8 teams each. Top four teams from each group advanced to the "championship group", the bottom four proceeded to the "relegation group". At the end of the first stage of the season, KSZO was ranked 6th out of 8 in group A which meant it took part in the "relegation group". There, KSZO finished 5th out of 8, which meant 13th place at the end of the season. Playoff matches against Górnik Łęczna followed, both of which were won by KSZO. [4]

In 2002/03, after a promising start, financial problems became more and more apparent. In addition to that, a conflict between the club management and the players, that ended in most players from the first team refusing to play and leaving the club, had a detrimental effect on the club's result. A completely new squad was formed based on players from junior teams and lower-level clubs but it proved to be inadequate for the top tier. Not managing to earn even a single point during the spring round, the club was directly relegated, ultimately being ranked 15th, ahead of only Pogoń Szczecin - a club that was also experiencing major difficulties at the time.

KSZO started the 2003/04 season at the second tier but withdrew at the halfway stage of the season, its results being annulled. [5] Due to huge debts, the association underwent liquidation.

The club was then recreated on the basis of another second-tier club, KS Stasiak Ceramika Opoczno. From that point onwards, the club took part in second division matches as KSZO SSA (sports p.l.c.) finishing mid-table for three seasons in a row. However, in 2007, the club was expelled from the second division (effectively relegated to the third level) and fined because its former chairman, Mirosław Stasiak, was accused of bribery.

KSZO finished the 2007/08 season in sixth place despite having 6 points deducted due to the aforementioned corruption accusations. Due to the reorganization of the Polish football leagues, the club was moved to the eastern group of the new II liga, which still was the third tier. KSZO won its group without losing a single match at home and was promoted to the second tier, now called I liga, again. In 2009/10, KSZO finished 8th out of 18 teams. However, the following season, the club was ranked only 16th, losing the relegation battle by a single point. KSZO participated in third-tier matches in 2011/12 but withdrew after 20 out of 30 legs and was therefore ranked last. [6] This marked the end of KSZO SSA.

In 2011, the new club, called KSZO 1929, was formed and joined the regional group of the klasa okręgowa, the sixth level of Polish association football the same year and won promotion. The following season, KSZO 1929 won the fifth-level competition and was promoted to the III liga, group IV (the fourth division), where the club has been playing since.

Although KSZO supporters' nickname is Świętokrzyscy Rozbójnicy, i.e. the Holy Cross (a reference to the Świętokrzyskie Voivodeship) Reavers, they are known for outstanding atmosphere and high attendance during the matches.

Player who have played in the top-flight

Mariusz Jop is a retired Polish footballer who played as a defender.

Stal Stalowa Wola is a Polish professional football club, currently playing in III liga, group IV. Stal's greatest success are 12th place in the 1993–94 Ekstraklasa, 1990–91 II liga championship and the quarter-final of the 1991–92 Polish Cup. It is the fourth best team in the history of the I liga, second professional association football division.

Cezary Czpak is a Polish retired footballer, who played as a midfielder.

Sunday Ibrahim is a Nigerian footballer who played in the Ekstraklasa in Poland for Wisła Kraków, KSZO Ostrowiec Świętokrzyski and Zagłębie Lubin. He also played in his native Nigeria, in China and in Norway.

Ząbkovia Ząbki is a Polish professional football club, based in Ząbki, Masovian Voivodeship. The club's colors are red, white, and blue. Its biggest successes were achieved when the club was called Dolcan Ząbki.

Janusz Andrzej Jojko is a Polish football coach and former professional footballer who played for Ruch Chorzów, GKS Katowice and KSZO Ostrowiec Świętokrzyski in the Polish Ekstraklasa. He is currently the goalkeeper coach of GKS Katowice and has also been the caretaker of the club since the former manager Jerzy Brzęczek was sacked in May 2017

Jeziorak Iława is a Polish football club based in Iława, Poland. It was founded in 1945. The team's official colors are white and blue. Jeziorak played in the second division for five years and spent multiple seasons at the third level of Polish association football.

Damian Byrtek is a Polish footballer who plays for Stomil Olsztyn in the I liga.

Michał Grunt is a Polish professional footballer playing for Podhale Nowy Targ as a forward.

Sokół Nisko is a Polish football club based in Nisko, Podkarpackie Voivodeship. Sokół currently compete in the Subcarpathian IV liga, the fifth-tier of Poland professional football, having won promotion from the regional league in 2019–20. The club's name literally means falcon in Polish, and it comes from the Polish Gymnastic Society "Sokół".

The 2016–17 Polish Cup was the sixty-third season of the annual Polish football knockout tournament. It began on 16 July 2016 with the first matches of the Preliminary Round and ended on 2 May 2017 with the Final at PGE Narodowy. Winners of the competition will qualify for the qualifying tournament of the 2017–18 UEFA Europa League.

The 2017–18 Polish Cup was the sixty-fourth season of the annual Polish football knockout tournament. It began on 14 July 2017 with the first matches of the preliminary round and ended on 2 May 2018 with the final at PGE Narodowy. Winners of the competition will qualify for the qualifying tournament of the 2018–19 UEFA Europa League.

Grzegorz Król is a former Polish footballer who played as a Forward. He started his career with Lechia Gdańsk aged 16, enjoying his greatest success during his 6 seasons with Amica Wronki, with whom he won the Polish Cup three times, and the Polish SuperCup twice. Other notable clubs Król played for were; Lech Poznan, GKS Bełchatów, and Polonia Warsaw.

Grzegorz Motyk is a former footballer who played as a defender or midfielder. In a career which was mostly played in the top two divisions in Poland, he had spells with Hutnik Nowa Huta, Amica Wronki, and Dyskobolia Grodzisk Wielkopolski. His longest spell at a club was with Lechia Gdańsk, where also played in both of the Lechia Gdańsk merger teams Olimpia-Lechia Gdańsk and Lechia-Polonia Gdańsk. 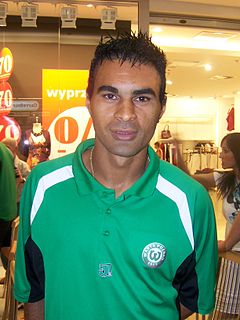 Sérgio Leandro Seixas Santos known as Sérgio Batata or just Batata is a former Brazilian born Polish footballer who played as a defender or midfielder.

In the 2020–21 season, Stal Stalowa Wola compete in III liga, group IV and the regional Polish Cup. In addition, they competed in the season's edition of the central Polish Cup. The season coveres the period from 9 August 2020 to 20 June 2021.

Wieczysta Kraków is a Polish football club based in Kraków. They currently play in the Polish regional league, the sixth tier of the national football league system.