Kadakkal is a historic town located in the eastern part of Kollam district, Kerala.

Kadakkal was where one of the notable movements of the Indian independence movement, the Kadakkal Riot Case, led by Franco Raghavan Pillai, took place. [1]

Kadakkal is an important business centre, containing businesses such as Kadakkal Chantha Market which sell goods such as coconut, areca nut, copra, tapioca and rubber.

The nearest bus stations at Kadakkal Panchayath is Kadakkal Bus Stand, while the nearest railway stations are located at Punalur , Paravur and Varkala. The nearest airport is Trivandrum International Airport.

Arcot is a town and urban area of Ranipet district in the state of Tamil Nadu, India. Located on the southern banks of Palar River, the city straddles a trade route between Chennai and Bangalore or Salem, between the Mysore Ghat and the Javadi Hills. As of 2018, the city had a population 129,640. The sweet makkan peda is a local speciality while Arcot biryani, a rice-based traditional food, is also served here.

Alibag, also known as Alibaug, is a coastal town and a municipal council in Raigad district of Maharashtra, India. It is the headquarters of the Raigad district and is south of the city of Mumbai. Alibag is part of the Mumbai Metropolitan Region and is situated at a distance of about 96 km from Mumbai and 143 km from Pune. Alibag is a holy place for Goddess Shree Padmakshi Renuka, and thousands of people go there to worship every day.

Longnewton is a village and civil parish in the borough of Stockton-on-Tees and ceremonial county of County Durham, England. The population taken at the 2001 Census was 733 increasing to 828 at the 2011 Census. It is situated between Darlington and Stockton-on-Tees. The village is mostly privately owned dwellings, and has a public house, The Derry, St. Mary's church and Saint Mary's Church of England primary school. Longnewton is not home to a secondary school however it is in the catchment area for Egglescliffe Secondary School, which is located 3 miles away and around a 10-minute drive. Located in the village is also a community centre, most commonly known as the Wilson Centre which has 3 different venue rooms, for a variety of activities and occasions. Longnewton is also a 10 minutes drive north of Teesside International Airport. In March 2007 a new bypass and junction on the A66 which runs just north of the village was created after almost 30 years of proposals, the junction was fully open to traffic in May 2008. A new roundabout has been put in place to service Teesside International Airport and ease traffic levels around the surrounding area.

Sattur or Saathur is a town in Virudhunagar district in the Indian state of Tamil Nadu. As of 2011, the town had a population of 29,398.

Thuvakudi is a town in Tiruchirapalli district in the Indian state of Tamil Nadu. It is an industrial town housing more than 250 industries and is located in the National Highway NH 65 between Tiruchirapalli and Thanjavur. The town has a dry weather, making it suitable for dry crops like cotton, chillies and millets..

Jaigaon is a census town in Alipurduar subdivision under Kalchini Block of Alipurduar district in the state of West Bengal, India. It is located on the country's border with Bhutan, and Bhutan Gate separates the two countries. Phuentsholing is the Bhutan's nearest city to Jaigaon. Bhutan does not have domestic roads linking to all its towns, so uses roads passing through Jaigaon to reach such destinations as Samtse, Gomtu, Nganglam and Samdrup Jongkhar.

Bhowali[bʱəʋaːli] is a town and a municipal board in Nainital District in the state of Uttarakhand, India. It is situated at a distance of 11 km (6.8 mi) from the city of Nainital, the district headquarters; at an average elevation of 1,654 m (5,427 ft) from sea level. It is the seat of Bhowali tehsil, one of the eight subdivisions of Nainital district.

Hindupur is a city in Sri Sathya Sai district of the Indian state of Andhra Pradesh. It is located to the edge of the Andhra–Karnataka border and is the headquarters of Hindupur mandal. Hindupur is the biggest Parliamentary Constituency in the newly formed District Sri Sathya Sai. It is located about 67 km from district headquarters Puttaparthi, 100 km from Bengaluru the capital of Karnataka, 95 km From Kadiri.

Karuppur is a panchayat town in Salem District in the Indian state of Tamil Nadu. It is located on the National Highway 7 between Salem and Bangalore. The Periyar University, with which many Salem colleges are affiliated, is located here. Government College of Engineering, referred as GCE-Salem is also located here. It is a railway station on the Chennai-Shoranur railway line.

Nehtaur is a city, near Bijnor city in Bijnor district in the northern Indian state of Uttar Pradesh. Nehtaur is an ancient and well known town because of its culture and educational backgrounds. Nehtaur Town was established by the Taga Minister family of Ajmer state when they came from Ranthambhor, Rajasthan after it was captured by Qutubuddin Aibak and the place was called Nai+thour = NEHTAUR. This is how Nehtaur derived its name [Ref. Book-History of Islam in India].

Polur is a scenic town, divisional headquarters and a market center in Tiruvannamalai district of Tamil Nadu in India. Located at the foothills of Javvadhi hills, a popular section of Eastern Ghats, Polur is often regarded as Gateway of Eastern ghats. Polur was once a eminent center of Tamil Jainism. The town is home to Dharani sugars, chemicals and fertiliser Pvt., Ltd, and number of agro based industries including coir industries. The famous Chittor - Cuddalore road passes through the town. The town is located 29 Kilometres north of city of Tiruvannamalai and 45 kilometres south of Vellore Metropolis.

Srisailam is a census town in Nandyal district of the Indian state of Andhra Pradesh. It is the mandal headquarters of Srisailam mandal in Atmakur revenue division. It is located about 160 kilometres (99 mi) from the district headquarters Nandyal, 180 kilometres (112 mi) from Kurnool, and it is located about 264 kilometres (164 mi) from Vijayawada. The town is famous for Mallikarjuna Jyotirlinga Temple and is one of the holy pilgrimage sites for Saivism and Shaktism sects of Hinduism. The town is classified as both Jyotirlinga and Shakti Peetha.

Ariyalur is a town and district headquarters of Ariyalur district in the South Indian state of Tamil Nadu and is rich in limestone, surrounded with seven cement factories and two sugar factories. The town is located at a distance of 310 km (190 mi) from the state capital Chennai.

Shegunashi is a village in the southern state of Karnataka, India. It is located in the Athani taluk of Belagavi district in Karnataka.

Rurka Kalan is a village in the Tehsil Phillaur, Jalandhar, Punjab, India. Khurd and Kalan Persian language word which means small and Big respectively when two villages have same name then it is distinguished as Kalan means Big and Khurd means Small with Village Name. 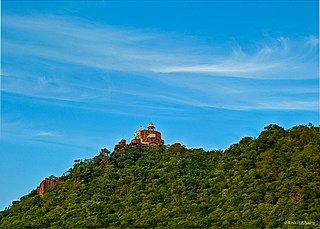 Lavkushnagar, formerly known as Laundi and Lavpuri, is a town/tehshil and a nagar panchayat in Chhatarpur district in the Indian state of Madhya Pradesh. It is about 55 km (34 mi) away from Chhatarpur and 37 km (23 mi) from the temple town Khajuraho. The Urmil and Kail Rivers flow through this town. The Civil Airport Khajuraho and Dumra, Harpalpur, and Khajuraho Railway Station are located nearby, and links it to some major towns and cities of Madhya Pradesh. It also has a Civil Court, a Sub Jail, and a police station.

Wikimedia Commons has media related to Kadakkal .
This page is based on this Wikipedia article
Text is available under the CC BY-SA 4.0 license; additional terms may apply.
Images, videos and audio are available under their respective licenses.