Kaj Harald Leininger Munk (commonly called Kaj Munk) (13 January 1898 – 4 January 1944) was a Danish playwright and Lutheran pastor, known for his cultural engagement and his martyrdom during the Occupation of Denmark of World War II. He is commemorated as a martyr in the Calendar of Saints of the Lutheran Church on 14 August, alongside Maximilian Kolbe.[ citation needed ]

He was born Kaj Harald Leininger Petersen on the island of Lolland, Denmark, and raised by a family named Munk after the death of his parents. From 1924 until his death, Munk was the vicar of Vedersø in Western Jutland. [1] Munk's plays were mostly performed and made public during the 1930s, although many were written in the 1920s. Much of his other work concerns the "philosophy-on-life debate" (religion—Marxism—Darwinism) which marked much of Danish cultural life during this period.[ citation needed ]

On one occasion, in the early 1930s, in a comment that came back to haunt him in later years, Munk expressed admiration for Hitler (for uniting Germans) and wished a similar unifying figure for Danes. [2] However, Munk's attitude towards Hitler (and Mussolini) turned to outspoken disgust as he witnessed Hitler's persecution of the German Jewish community, and Mussolini's conduct of the war in Ethiopia. In 1938, the Danish newspaper Jyllands-Posten published on its front page an open letter to Benito Mussolini written by Kaj Munk criticising the persecutions against Jews. [1]

Early on, Munk was a strong opponent of the German Occupation of Denmark (1940–1945), although he continually opposed the idea of democracy as such, preferring the idea of a "Nordic dictator" who should unite the Nordic countries and keep them neutral during periods of international crisis. His plays Han sidder ved Smeltediglen ("He sits by the melting pot") and Niels Ebbesen were direct attacks on Nazism. The latter, centering on the figure of Niels Ebbesen, a medieval Danish squire considered a national hero for having assassinated an earlier German occupier of Denmark, Count Gerhard III, was a contemporary analogue to World War II-era Denmark. Despite friends who urged Munk to go underground, he continued to preach against Danes who collaborated with the Nazis.[ citation needed ]

The Gestapo arrested Munk on the night of 4 January 1944, a month after he had defied a Nazi ban and preached the first Advent sermon at the national cathedral in Copenhagen. Munk's body was found in a roadside ditch in rural Hørbylunde near Silkeborg the next morning with a note stating "Swine, you worked for Germany just the same." [3]

Munk's body was returned to his parish church, Vedersø, where it is buried outside the choir. [4] A simple stone cross was also erected on a small hill overlooking the site where Munk's body was dumped. [5]

Half of the January 1944 issue of the resistance newspaper De frie Danske was dedicated to Munk with his portrait filling the front page. The obituary Danmarks store Søn—Kaj Munk (The great son of Denmark—Kaj Munk) filled the next page, followed by excerpts from a new year's sermon he had given. Next came a description of his murder and a photo reportage from his funeral. Lastly the paper featured condemning reactions from influential Scandinavians, namely Prince Wilhelm, Duke of Södermanland, Jarl Hemmer, Johannes Jørgensen, Sigrid Undset, Erling Eidem and Harald Bohr. [6]

The Danish government allowed his widow, Lise, to live at the parish house until she died in 1998. The church and parish house were restored as a memorial and opened to the public in 2010. [7]

Munk often used a historical background for his plays—among his influences were William Shakespeare, Adam Oehlenschläger, Henrik Ibsen, and George Bernard Shaw. [8] As a playwright, Munk became known for "strong characters"—integrated people who fight wholeheartedly for their ideals (whether good or bad). In his play En Idealist, for example, the "hero" is King Herod whose fight to maintain power is the motive behind all of his acts until he is at last defeated by a show of kindness to the Christ child in a weak moment.[ citation needed ]

His 1925 play Ordet (The Word) generally is considered to have been his best work; it is an investigation of miracles from the unique (at least, to theatre) viewpoint of one who was not prepared to dismiss them. A family of farmers—of differing degrees of faith—find themselves reconciled to their neighbours through a miracle. A 1943 film adaptation titled The Word was directed by Gustaf Molander. A 1955 film version of Ordet was directed by Carl Theodor Dreyer, and won numerous awards, including the Golden Lion at the 16th Venice International Film Festival and the 1956 Golden Globe Award for Best Foreign Language Film. [9] [ citation needed ]

Monk's plays, many of which have been performed at the Royal Theatre, Copenhagen, and elsewhere, include:

His play Niels Ebbesen has been translated into English (2007) by his granddaughter Arense Lund and Canadian playwright Dave Carley.[ citation needed ]

Prince Wilhelm, Duke of Södermanland was a Swedish and Norwegian prince. He authored many books as Prins Wilhelm.

Carl Theodor Dreyer, commonly known as Carl Th. Dreyer, was a Danish film director. He is regarded by many critics and filmmakers as one of the greatest directors in cinema. His best known films include The Passion of Joan of Arc (1928), Vampyr (1932), Day of Wrath (1943), Ordet (1955), and Gertrud (1964).

Harald August Bohr was a Danish mathematician and footballer. After receiving his doctorate in 1910, Bohr became an eminent mathematician, founding the field of almost periodic functions on which he published a comprehensive survey in the period from 1954 to 1974 with the help of his son-in-law, mathematician Erling Følner. His brother was the Nobel Prize-winning physicist Niels Bohr. He was a member of the Danish national football team for the 1908 Summer Olympics, where he won a silver medal. 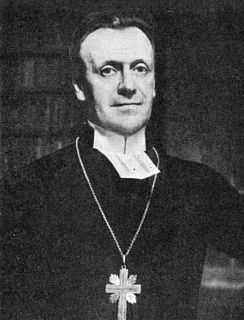 Erling Eidem was a Swedish theologian who served as archbishop of Uppsala 1931–1950. 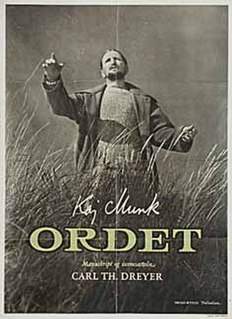 Ordet, is a 1955 Danish drama film, directed by Carl Theodor Dreyer. It is based on a play by Kaj Munk, a Danish Lutheran priest, first performed in 1932. The film won the Golden Lion at the 16th Venice International Film Festival, and was the only film by Dreyer to be both a critical and financial success.

Niels Ebbesen was a Danish squire and national hero, known for his killing of Gerhard III, Count of Holstein-Rendsburg in 1340. From 1332 to 1340, Count Gerhard was the lord of both Jutland and Funen. His death meant the end of Holstein rule in Denmark.

Jan Mendoses was a European pirate or merchant who lived during the 17th century. It is possible that Jan Mendoses' real name was Juan [de] Mendoza. There is considerable doubt about his nationality, some sources claiming he was a Belgian named Mandaus, others that he was Spanish. He may even have been a merchant heading for Russia, rather than the "notorious pirate" claimed by Danish sources.

Jarl Robert Hemmer was a Swedish-speaking Finnish author. He was nominated for the Nobel Prize in Literature eight times.

Henrik Malberg (1873–1958) was a Danish actor of theater and Danish cinema who played his most noted role at the age of 80—the stoic authoritative farm owner in the Carl Theodor Dreyer classic film Ordet. 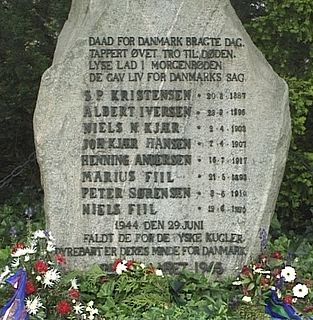 The Hvidsten Group was a Danish resistance group during World War II named after the Hvidsten Inn between Randers and Mariager in Jutland where it was formed.

Marius Fiil was the inn keeper at Hvidsten Inn and a member of the Danish resistance executed by the German occupying power.

Grete Frische was a Danish actress, screenwriter and director. The daughter of a playwright, Frische is best known for her screenplays, especially the war drama Støt står den danske sømand which received the 1949 Bodil Award for Best Danish Film. During a short career of less than 24 years, Frische wrote 22 produced screenplays including five of the popular Far til Fire family comedies and two adaptations of Morten Korch novels.

Agnes Slott-Møller, née Rambusch was a Danish Symbolist painter; influenced by the Pre-Raphaelites. She is known for works inspired by Danish history and folklore. Her husband was the painter, Harald Slott-Møller.

Ole Falkentorp was a Danish architect. 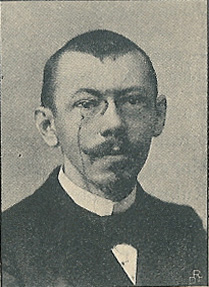 Jens Johannes Jørgensen was a Danish writer, best known for his biographies of Catholic saints. He was nominated for the Nobel Prize in Literature five times.

Torben Niels Ebbesen is a Danish sculptor and painter. His installations in contrasting materials and other abstract works can be seen in locations in Denmark, Germany and Sweden as well as in several Danish museums.

Niels Nielsen Kjær was a member of the Danish resistance executed by the German occupying power.

Gudrun Fiil was inn keeper at Hvidsten Inn and member of the Danish resistance, whose husband, son and son-in-law were executed by the German occupying power.

Kirstine Fiil was a convicted member of the Danish resistance as part of the Hvidsten Group, whose husband, father and brother were executed by the German occupying power.

Gerda Søvang Fiil was a convicted member of the Danish resistance, whose father and brother were executed by the German occupying power.