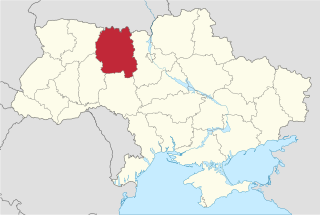 Zhytomyr Oblast is an oblast (province) of northern Ukraine. The administrative center of the oblast is the city of Zhytomyr. Its population is approximately 1,208,212 (2020 est.) .

Baryshivka Raion is a raion in east-central Kyiv Oblast (province) of Ukraine. Its administrative center is Baryshivka. The raions area totals 957.6 km². The raion was formerly known as Baryshivska Rairada from 1923 to 1963. Population: 34,577 (2020 est.) . 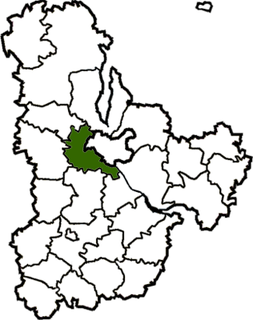 Kyiv-Sviatoshyn Raion is a raion (district) in Kyiv Oblast of Ukraine, adjacent to the city of Kyiv which serves as the administrative center for the raion. The city of Kyiv itself does not belong to the raion. Population: 210,123 (2020 est.) .

Vasylkiv Raion is a raion (district) in Kyiv Oblast of Ukraine. Its administrative center is Vasylkiv which is incorporated separately as a town of oblast significance and does not belong to the raion. Population: 57,613 (2020 est.) .

Vasylkivskyi Raion may refer to:

The Internal Troops of Ukraine were a uniformed gendarmerie in Ukraine which merged with the National Guard of Ukraine on March 13, 2014. They were subordinate to the Chief Directorate of Ministry of Internal Affairs, and cooperate with the State Emergency Service of Ukraine. The VV were used to assist militsiya in policing, deal with riots and internal armed conflicts, and safeguard important facilities such as nuclear power plants. In wartime, the Internal Troops were under the jurisdiction of the Ukrainian armed forces for local defense and rear area security.

Marianivka may refer to the following places in Ukraine:

Doslidnytske is an urban-type settlement in Vasylkiv Raion (district) of Kyiv Oblast (region) in northern Ukraine. Its population was 2,167 as of the 2001 Ukrainian Census. Current population: 1,878 (2020 est.) .

Hrebinky is an urban-type settlement in Vasylkiv Raion (district) of Kyiv Oblast (region) in northern Ukraine. Its population is 6,993 as of the 2001 Ukrainian Census. Current population: 5,736 (2020 est.) .

Kalynivka Raion is one of the 33 regions of Vinnytsia Oblast, located in southwestern Ukraine. The administrative center of the raion is the town of Kalynivka. Population: 56,268 (2020 est.)

Kalynivka is a name of several populated places in Ukraine.