Kamakichi Kishinouye (岸上 鎌吉, Kishinoue Kamakichi, 29 November 1867 – 22 November 1929) was a Japanese fisheries biologist and cnidariologist and a professor of the Imperial University of Tokyo (Faculty of Agriculture) between 1908 and 1928. Kishinouye died in Chengtu of a sudden illness while on a collecting expedition to China. [1]

Kishinouye recommended Kumataro Ito to Hugh M. Smith as an artist on board the U.S. Bureau of Fisheries Steamer U.S.S. Albatross during the Philippine Expedition from 1907 to 1910. [2]

He gave his name to the jellyfish genus Kishinouyea Mayer, 1910, with a preoccupied name. Kishinouyea has been also used by Yoshio Ôuchi to describe a praying mantis genus that he quickly renamed Kishinouyeum in 1938, and that could be a junior synonym for Phyllothelys . [4] 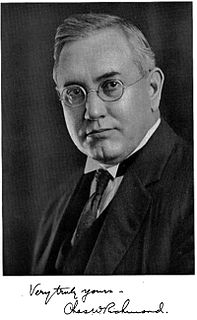 Charles Wallace Richmond was an American ornithologist. He is best remembered for a compilation of the Latin names of birds that is called the Richmond Index. 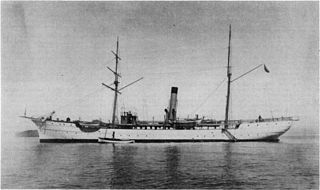 The second USS Albatross, often seen as USFC Albatross in scientific literature citations, was an iron-hulled, twin-screw steamer in the United States Navy and reputedly the first research vessel ever built especially for marine research.

The pygmy ribbontail catshark is a species of finback catshark, family Proscylliidae, distributed patchily in the western Indo-Pacific from Tanzania to the Philippines. It occurs around the edges of continental and insular shelves at a depth of 71–766 m (233–2,513 ft), typically on or near mud bottoms. One of the smallest living shark species, the pygmy ribbontail catshark grows to a maximum known length of 24 cm (9.4 in). It has a slender body with a low, ribbon-like tail fin, and is dark brown in color with blackish dorsal fin markings and tail bands. This shark feeds mainly on bony fishes, followed by crustaceans and then squid. It is aplacental viviparous with females bearing litters of 1–2 relatively large pups. It is of minimal significance to fisheries, being caught as bycatch in some areas.

Kumataro Ito was the illustrator on board the U.S. Bureau of Fisheries Steamer U.S.S. Albatross during the Philippine Expedition from 1907 to 1910.

Kumatarō is a masculine Japanese given name. Notable people with the name include:

Calvadosia is a genus of stalked jellyfish in the order Stauromedusae. It is the only genus in the monotypic family Kishinouyeidae. 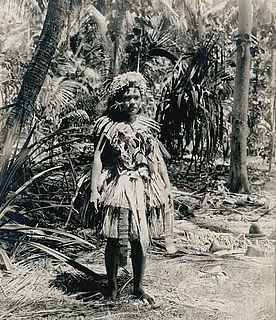 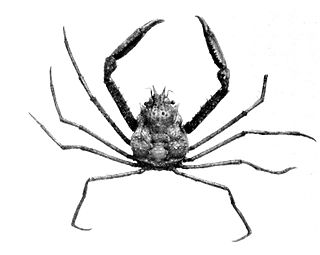 Oregonia bifurca, commonly known as the split-nose crab or the split-nose decorator crab, is a species of crabs belonging to the genus Oregonia. It is a rare deep-water species that inhabits the tops of seamounts and guyots in the northeastern Pacific Ocean; from the Aleutian Islands, the Bering Sea, the Hawaiian–Emperor seamount chain, to the waters off British Columbia. It is closely related to the more common shallow-water species Oregonia gracilis, the graceful decorator crab.

Ole Theodor Jensen Mortensen, also known as Theodor Mortensen was a Danish scientist and professor at the Zoological Museum, Copenhagen. He specialized in sea urchins (Echinoidea) and provided an enormous marine collection to the museum. He collected many sea urchin species on his expeditions between 1899–1930.

The sawback poacher is a species of fish in the family Agonidae, the poachers. It was described by Charles Henry Gilbert in 1896, originally under the genus Odontopyxis. It is a marine, temperate water-dwelling fish which is known from the northern Pacific Ocean, including Japan, the Gulf of Anadyr, the Bering Sea, the Aleutian chain, and British Columbia, Canada. It dwells at a depth range of 18 to 975 metres, and inhabits soft sediments. Males can reach a maximum total length of 27 centimetres (11 in).

The longnose poacher is a fish in the family Agonidae (poachers). It was described by Charles Henry Gilbert in 1896, originally under the genus Odontopyxis. It is a marine, deep water-dwelling fish which is known from the northern Pacific Ocean, including the Bering Sea, southeastern Alaska, northern Japan, the Sea of Japan and the Sea of Okhotsk. It dwells at a depth range of 20 to 460 metres. Males can reach a maximum total length of 25 centimetres (9.8 in).

Staurocalyptus is a genus of sponge. It was circumscribed in 1897 by Isao Ijima.