Kandy Lake (Sinhala : බෝගම්බර වැව/ කිරි මූද), also known as Kiri Muhuda or the Sea of Milk, is an artificial lake in the heart of the hill city of Kandy, Sri Lanka, built in 1807 by King Sri Wickrama Rajasinghe next to the Temple of the Tooth. Over the years, it was reduced in size. It is a protected lake, with fishing banned.

The lake in front of the Temple of the Tooth was formerly a stretch of paddy fields known as Tigolwela. It was converted to a lake by King Sri Wickrama Rajasinha in 1807. As there had been a pond named Kiri-muhuda (a "sea of milk") in the middle of the Tigolwela, the lake constructed subsequently too was named Kiri-muhuda. Deveda Moolacharya is considered the architect of the Kandy Lake. The king first built a dam across the paddy fields, starting from the Paththirippuwa (octagon) side, where the steps leading into the lake by the Mahamaluwa (Esplanade) are still visible, stretching across to the Poya-maluwa. The dam, upon which a roadway was constructed, allowed the king to go across to the Malwatte Vihare. According to D’Oyley, the dam was constructed between 1810–1812.

There are numerous local legends and folklore regarding the lake. One such is that the small island at its center was used by the king's harem for bathing and was connected to the palace by a secret tunnel.

The extent of Kandy Lake is 6,544 sq. meters. The circumference is 3.21 km. The highest depth is 18.5 meters. The parapet wall giving the appearance of a cloud, is popularly called Walakulu Bemma and measures 633.82 meters. The building located at the center of the lake, together with some ancient ruins, was known as Diyatilaka Mandapaya in the past. It is believed that the Kings used this pavilion for relaxation.

The Kandy Lake offers a place for a stroll or a jog. The shady path surrounding the lake provides a view of the hills and the town. The Malwatte temple, one of the two head temples of the Siyam Nikaya sect of Theravada Buddhism, is also located overlooking the lake.

Sri Wickrama Rajasinghe built a dam for the purpose of reaching the opposite side of the lake. The king removed the soil from both the palace end and the Malwatte Vihare end, leaving an island behind. At first this island was used as the Royal Summer House for the Queen and the ladies of the court to relax. The British later used it as an ammunition store and added a fortress-style parapet around its perimeter.

The lake is surrounded by a wall called Walakulu Bamma (Sinhala : වළාකුළු බැම්ම) or Clouds Wall, which was built to increase the beauty of the Kandy Lake. It extends around half of the lake and has taken one skilled architect to build it. Sri Wickrama Rajasinghe was unable to complete the wall before the city was captured by the British and he was forced to relinquish the Kandian kingdom. The Walakulu Bamma still lies unfinished. The triangular shaped holes in the wall were used in the past for lighting oil lamps on festival days.

Ulpange or Queens Bathing Pavilion is situated partly in the waters of the Kandy Lake. The wives and concubines of Sri Wickrama Rajasinghe used the pavilion when bathing in the lake. After the British captured the city they added another storey and used the building as a library. It is currently used as a police post.

Facts about the lake

There are a variety of different trees planted around the lake including Nuga trees, palm trees, fruit trees, Sal trees and Mara trees. Some of the trees are about 74 years old. The trees are now maintained by the Municipal Council of Kandy. There are a number of bird species found on the lake, including Indian cormorant, white egret crane, wood stork and pelican.

Pollution of the lake is a serious problem. The government and the surrounding schools are trying to decrease the problem by putting signs and operating environmental societies. Until 1960 the Kandy water board used the lake to distribute water to the surrounding areas. They stopped pumping water from the lake because of the increase in pollution.

The relic of the tooth of Buddha is venerated in Sri Lanka as a cetiya relic of Gautama Buddha, on whose teachings Buddhism was founded. 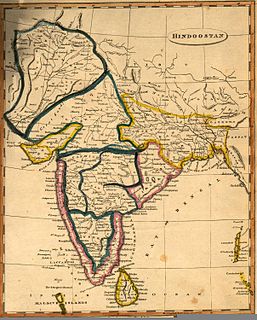 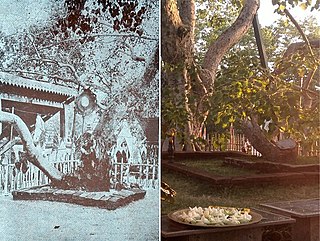 Jaya Sri Maha Bodhi is a sacred fig tree in the Mahamewna Gardens, Anuradhapura, Sri Lanka. It is said to be the southern branch from the historical Sri Maha Bodhi at Buddha Gaya in India under which Buddha attained Enlightenment. It was planted in 288 BC, and is the oldest living human-planted tree in the world with a known planting date. Today it is one of the most sacred relics of the Buddhists in Sri Lanka and respected by Buddhists all over the world.

The Kandy Esala Perahera also known as The Festival of the Tooth is a festival held in July and August in Kandy, Sri Lanka. This historical procession is held annually to pay homage to the Sacred Tooth Relic of Buddha, which is housed at the Sri Dalada Maligawa in Kandy. A unique symbol of Sri Lanka, the procession consists of traditional local dances such as fire-dances, whip-danc garments. The festival ends with the traditional diya-kepeema ritual, a water cutting ceremony which is held at the Mahaweli River at Getambe, Kandy.. 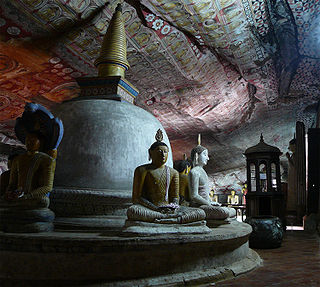 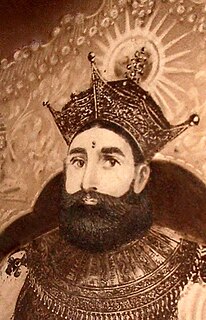 Sri Vikrama Rajasinha was the last of four Kings, to rule the last Sinhalese monarchy of the Kingdom of Kandy in Sri Lanka. The Nayak Kings were of Telugu origin who practiced Shaivite Hinduism and were patrons of Theravada Buddhism. The Nayak rulers played a huge role in reviving Buddhism in the island. They spoke Telugu or Tamil, and used Tamil as the court language in Kandy alongside Sinhala.

Royal Botanic Gardens, Peradeniya are about 5.5 km to the west of the city of Kandy in the Central Province of Sri Lanka. In 2016, the garden was visited by 1.2 million locals and 400,000 foreign visitors. It is near the Mahaweli River. It is renowned for its collection of orchids. The garden includes more than 4000 species of plants, including orchids, spices, medicinal plants and palm trees. Attached to it is the "National Herbarium of Sri Lanka". The total area of the botanical garden is 147 acres (0.59 km2), at 460 meters above sea level, and with a 200-day annual rainfall. It is managed by the Division of National Botanic Gardens of the Department of Agriculture. 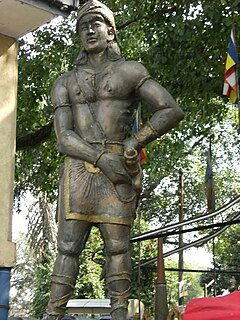 Rajasinghe I was a king of the Kingdom of Sitawaka. He is known for his extreme bravery and patriotism against the Portuguese invasion of Sri Lanka. Born as Tikiri Bandara to King Mayadunne of the Kingdom of Sitawaka, the name "Rajasinha" was given to him after the fierce battle against Portuguese forces at the Battle of Mulleriyawa. Rajasinha means the King of Lions.

The Battle of Gannoruwa was a battle of the Sinhalese–Portuguese War fought in 1638 between the occupying Portuguese forces and the Sinhalese King's army at Gannoruwa in the District of Kandy, Sri Lanka. The Portuguese had attempted three times without success to capture the Kingdom of Kandy, in order to bring the entire island under their rule. In 1635, Rajasinghe II became the king of Kandy and started negotiations with the Dutch to obtain their help in driving out the Portuguese. The Portuguese hastened their efforts to take Kandy because of this, and Diogo de Melo de Castro, the Portuguese Captain General, tried to provoke the Sinhalese on several occasions.

The Royal Palace of Kandy, located to the north of the Temple of the Tooth in Kandy, was the royal residence of the Sri Lankan monarchy of the Kingdom of Kandy in Sri Lanka. The last king to reside in it was King Sri Vikrama Rajasinha (1798–1815). Once part of a large palace complex that included the King's Palace, Royal Audience Hall, Queen's Palace, King's Harem Quarters and Queen's Bathing Pavilion (Ulpange), together with the Temple of the Tooth. Adjacent to the Royal Palace is the Victorian era building that until recently housed Kandy High Court.

The Kingdom of Dambadeniya was a medieval kingdom in what is present day Sri Lanka. The kingdom's rulers reigned from 1220–1345. 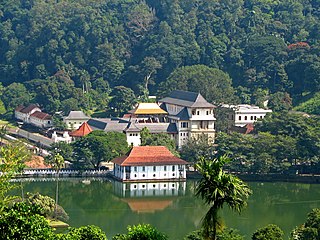 Udawattakele Forest Reserve often spelled as Udawatta Kele, is a historic forest reserve on a hill-ridge in the city of Kandy. It is 104 hectares large. During the days of the Kandyan kingdom, Udawattakele was known as "Uda Wasala Watta" in Sinhalese meaning "the garden above the royal palace". The sanctuary is famous for its extensive avifauna. The reserve also contains a great variety of plant species, especially lianas, shrubs and small trees. There are several giant lianas. Many of small and medium size mammals that inhabit Sri Lanka can be seen here. Several kinds of snakes and other reptiles might be seen. Udawattakele was designated as a forest reserve in 1856, and it became a sanctuary in 1938. 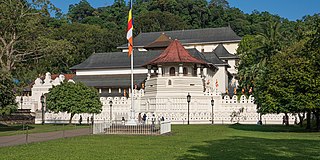 Sri Dalada Maligawa or the Temple of the Sacred Tooth Relic is a Buddhist temple in the city of Kandy, Sri Lanka. It is located in the royal palace complex of the former Kingdom of Kandy, which houses the relic of the tooth of the Buddha. Since ancient times, the relic has played an important role in local politics because it is believed that whoever holds the relic holds the governance of the country. Kandy was the last capital of the Sri Lankan kings and is a World Heritage Site mainly due to the temple.

Hanguranketha is a town in the Nuwara Eliya District, Central Province of Sri Lanka.

Degaldoruwa Raja Maha Vihara is an ancient Buddhist rock temple, situated in Amunugama, Kandy, Sri Lanka. It is famous for its Kandyan Era Frescoes. The cave itself was said to have been excavated out of a rock which rises to a height of approximately 12.3 m (40 ft), and shelters the shrine room and entrance chamber.

Paththirippuwa or Pattirippuwa is an octagonal pavilion and one of three main structures which comprise the Temple of the Tooth.