Kangon is a village in Banmauk Township, Katha District, in the Sagaing Region of northern-central Burma. 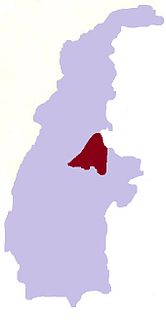 Sagaing Region is an administrative region of Myanmar, located in the north-western part of the country between latitude 21° 30' north and longitude 94° 97' east. It is bordered by India’s Nagaland, Manipur, and Arunachal Pradesh States to the north, Kachin State, Shan State, and Mandalay Region to the east, Mandalay Region and Magway Region to the south, with the Ayeyarwady River forming a greater part of its eastern and also southern boundary, and Chin State and India to the west. The region has an area of 93,527 km2. In 1996, it had a population of over 5,300,000 while its population in 2012 was 6,600,000. The urban population in 2012 was 1,230,000 and the rural population was 5,360,000. The capital is Sagaing.