Kansai Soccer League(関西サッカーリーグ) is a Japanese football league covering most of the Kansai region, the prefectures of Hyōgo, Kyōto, Nara, Osaka, Shiga and Wakayama. Mie, usually considered part of Kansai in non-football usage, is allotted to the Tōkai Soccer League. 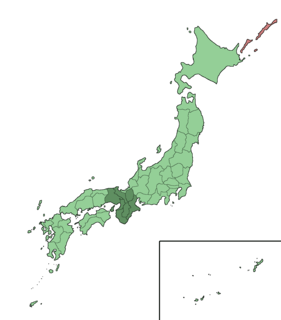 The Kansai region or the Kinki region lies in the southern-central region of Japan's main island Honshū. The region includes the prefectures of Mie, Nara, Wakayama, Kyoto, Osaka, Hyōgo and Shiga, sometimes Fukui, Tokushima and Tottori. While the use of the terms "Kansai" and "Kinki" have changed over history, in most modern contexts the use of the two terms is interchangeable. The urban region of Osaka, Kobe, and Kyoto is the second-most populated in Japan after the Greater Tokyo Area.

Kyoto Prefecture is a prefecture of Japan in the Kansai region of the island of Honshu. Its capital is the city of Kyoto.

Sagawa Express Osaka Soccer Club(佐川急便大阪サッカー部) were a Japanese soccer team based in Higashisumiyoshi-ku, Osaka. They were founded in 1965 and played in the Japan Football League (JFL) from 2002 to 2007, when they merged with Sagawa Express Tokyo S.C. to form what is now Sagawa Shiga F.C. As the name implies they were run by Sagawa Express, a Japanese transportation business.

Kyoto Sanga FC (京都サンガF.C.) is a Japanese professional football club based in Kyoto. The word "Sanga" is a Sanskrit term meaning "group" or "club", often used to denote Buddhist congregations. This reflects Kyoto's tradition of Buddhist temples. The club was formerly known as Kyoto Purple Sanga with "purple", the colour of the team uniforms, an imperial colour reflecting Kyoto's status as Japan's ancient imperial capital city. It was decided however that, from 2007, the team will simply been known as "Kyoto Sanga". They are the oldest club competing in the J.League.

SP Kyoto FC were an association football club based in Muko, Kyoto, Japan. They played for the last time in Japan Football League for 2015 season.

The 1967 season in Japanese football

Statistics of Japanese Regional Leagues in the 2009 season.

Seishiro Shimatani was a Japanese football player and manager. He played for Japan national team.

Statistics of Emperor's Cup in the 1950 season.

NTT West Kyoto Soccer Ckub is a Japanese football club based in Kyoto. The club has played in Japan Soccer League Division 2.

FC TIAMO Hirakata is a football (soccer) club based in Hirakata, Osaka, which is located in Osaka Prefecture in Japan. They play in the Kansai Soccer League, which is part of Japanese Regional Leagues.

Banditonce Kakogawa is a football (soccer) club based in Kakogawa, which is located in Hyōgo Prefecture in Japan. They play in the Kansai Soccer League, which is part of Japanese Regional Leagues.

Lagend Shiga FC is a football (soccer) club based in Moriyama, which is located in Shiga Prefecture in Japan. They play in the Kansai Soccer League, which is part of Japanese Regional Leagues.