Kantianism is the philosophy of Immanuel Kant, a German philosopher born in Königsberg, Prussia (now Kaliningrad, Russia). The term Kantianism or Kantian is sometimes also used to describe contemporary positions in philosophy of mind, epistemology, and ethics.

Kantian ethics are deontological, revolving entirely around duty rather than emotions or end goals. All actions are performed in accordance with some underlying maxim or principle, which are vastly different from each other; it is according to this that the moral worth of any action is judged. Kant's ethics are founded on his view of rationality as the ultimate good and his belief that all people are fundamentally rational beings. This led to the most important part of Kant's ethics, the formulation of the categorical imperative, which is the criterion for whether a maxim is good or bad.

Simply put, this criterion amounts to a thought experiment: to attempt to universalize the maxim (by imagining a world where all people necessarily acted in this way in the relevant circumstances) and then see if the maxim and its associated action would still be conceivable in such a world. For instance, holding the maxim kill anyone who annoys you and applying it universally would result in self termination. Thus holding this maxim is irrational as it ends up being impossible to hold it.

Kant's ethics focus, then, only on the maxim that underlies actions, and judges these to be good or bad solely on how they conform to reason. Kant showed that many of our common sense views of what is good or bad conform to his system, but denied that any action performed for reasons other than rational actions can be good (saving someone who is drowning simply out of a great pity for them is not a morally good act). Kant also denied that the consequences of an act in any way contribute to the moral worth of that act, his reasoning being (highly simplified for brevity) that the physical world is outside our full control, and thus we cannot be held accountable for the events that occur in it.

The formulations of the categorical imperative:

In political philosophy, Kant has had wide and increasing influence with major political philosophers of the late twentieth century. For example, John Rawls [4] [5] drew heavily on his inspiration in setting out the basis for a liberal view of political institutions.[ clarification needed ] The nature of Rawls' use of Kant has engendered serious controversy [ clarification needed ] but has demonstrated the vitality of Kantian considerations across a wider range of questions than was once thought plausible.

Immanuel Kant was an influential German philosopher in the Age of Enlightenment. In his doctrine of transcendental idealism, he argued that space, time, and causation are mere sensibilities; "things-in-themselves" exist, but their nature is unknowable. In his view, the mind shapes and structures experience, with all human experience sharing certain structural features. In one of his major works, the Critique of Pure Reason, he drew a parallel to the Copernican revolution in his proposition that worldly objects can be intuited a priori ('beforehand'), and that intuition is therefore independent from objective reality.

Will, generally, is the faculty of the mind that selects, at the moment of decision, a desire among the various desires present; it itself does not refer to any particular desire, but rather to the mechanism responsible for choosing from among one's desires. Within philosophy, will is important as one of the parts of the mind, along with reason and understanding. It is considered central to the field of ethics because of its role in enabling deliberate action.

The categorical imperative is the central philosophical concept in the deontological moral philosophy of Immanuel Kant. Introduced in Kant's 1785 Groundwork of the Metaphysics of Morals, it may be defined as a way of evaluating motivations for action.

Groundwork of the Metaphysics of Morals is the first of Immanuel Kant's mature works on moral philosophy and remains one of the most influential in the field. Kant conceives his investigation as a work of foundational ethics—one that clears the ground for future research by explaining the core concepts and principles of moral theory, and showing that they are normative for rational agents.

In moral philosophy, deontological ethics or deontology is the normative ethical theory that the morality of an action should be based on whether that action itself is right or wrong under a series of rules, rather than based on the consequences of the action. It is sometimes described as duty-, obligation-, or rule-based ethics. Deontological ethics is commonly contrasted to consequentialism, virtue ethics, and pragmatic ethics. In this terminology, action is more important than the consequences. 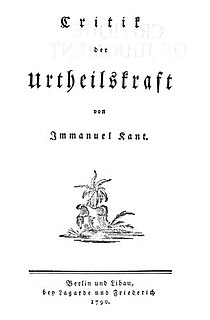 The Critique of Practical Reason is the second of Immanuel Kant's three critiques, published in 1788. It follows on from Kant's Critique of Pure Reason and deals with his moral philosophy.

Universal prescriptivism is the meta-ethical view which claims that, rather than expressing propositions, ethical sentences function similarly to imperatives which are universalizable—whoever makes a moral judgment is committed to the same judgment in any situation where the same relevant facts obtain.

The concept of universalizability was set out by the 18th-century German philosopher Immanuel Kant as part of his work Groundwork of the Metaphysic of Morals. It is part of the first formulation of his categorical imperative, which states that the only morally acceptable maxims of our actions are those that could rationally be willed to be universal law.

A maxim is a concise expression of a fundamental moral rule or principle, whether considered as objective or subjective contingent on one's philosophy. A maxim is often pedagogical and motivates specific actions. The Oxford Dictionary of Philosophy defines it as:

Generally any simple and memorable rule or guide for living; for example, 'neither a borrower nor a lender be'. Tennyson speaks of 'a little hoard of maxims preaching down a daughter's heart, and maxims have generally been associated with a 'folksy' or 'copy-book' approach to morality. 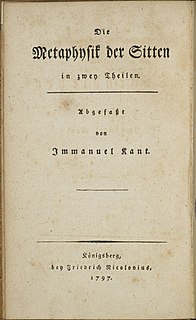 Radical evil is a phrase used by German philosopher Immanuel Kant, one representing the Christian term, radix malorum. Kant believes that human beings naturally have a tendency to be evil. He explains radical evil as corruption in a human being that takes over them entirely. It has their desire acting against the universal moral law. The outcome of one's natural tendency, or innate propensity, towards evil are actions or "deeds" that subordinate the moral law. By Kant, these actions oppose the universally moral maxims and displayed from self-love and self conceit. By many authors, Kant's concept of radical evil is seen as a paradox and inconsistent through his development of moral theories.

Allen William Wood is an American philosopher specializing in the work of Immanuel Kant and German Idealism, with particular interests in ethics and social philosophy. He is the Ruth Norman Halls professor of philosophy at Indiana University and has held professorships and visiting appointments at numerous universities in the United States and Europe. In addition to popularising and clarifying the ethical thought of Kant, Wood has also mounted arguments against the validity of trolley problems in moral philosophy.

Thomas English Hill Jr. is Emeritus Kenan Professor of Philosophy at the University of North Carolina at Chapel Hill and a specialist in ethics, political philosophy, history of ethics and the work of Immanuel Kant. He has also a Past-President of the American Philosophical Association.

Axiological ethics is concerned with the values which we hold our ethical standards and theories up to. It questions what, if any, basis exists for such values. Through doing so, it explores the justification for our values, and examines if there is any beyond arbitrary preference. While axiological ethics can be considered a subfield within the branch of ethics, it also draws in thought from other fields of philosophy, such as epistemology and value theory.