Kanzen Shouri Daiteioh (完全勝利ダイテイオー, Kanzen Shōri Daiteiō, lit. Perfect Victory Daiteioh), is a media series and the fourth and final installment of the Eldran series created by Sunrise and this series being co-created and funded by Dengeki Hobby Magazine.

This story happens one year since the defeat of the Kikaika's boss, Kikaijin, Eldran, the spirit of the Earth is guarding the planet peacefully from the evil villain organizations that came from space or another dimension, while giving several groups of kids special mechas which let them protect the Earth for years. It was only a matter of time when this very peaceful day suddenly changed when a very new evil organization known as the Onigashima attacked Earth. The Earth Defense Force, the Ganba Team and the former Harukaze Elementary students, the Saurers quickly rush to the attack and started fighting this new evil organization. However, the Onigashima managed to easily defeat the Eldran Robots with the pilots inside, which results in them turning into a giant golden sword. The golden sword appears from the sky and turn Gokuraku Elementary School into a base for Daiteioh. Tarou Oomomo is a very brash 5th grader of Class 5-3 along with Kakeru and Mai. The three students accepted Eldran's mission. Now with Asuka's cousin, Hiryu, they are able to fight side by side with each other. Now, riding in their battleship, the Gokuracruiser, the Dankettsu Team children from Class 5-3 are ready to help the other Eldran robots with the pilots inside to fight against the Onigashima.

A fifth grader who is the leader of the Dankettsu Team and pilot of Teioh, Daiteioh and Perfect Daiteioh. Sometimes called "Momotaro" by his classmates, he is a brash young boy who is really obsessed with the Ganba Team. After his encounter with the Onigashima and meeting Eldran, he then pledged to protect the Earth against their threat.

The second member of the Dankettsu Team and the pilot of Kuuoh and only female member of the team, Mai is candidly liked by everyone despite that she is a realist. She admires the Earth Defense Team and was once part of the group, 5 years ago.

The third member of the Dankettsu Team and the pilot of Rikuoh. He usually has conflicts with Momotaro in some points, but he is sometimes very reliable in some spots. He usually admires the Saurers, and is also good at sports.

The fourth member of the Dankettsu Team and the pilot of both the Ryuoh and Dairyuoh. He is a transfer student from another school and also Asuka's cousin. He is very calm, but sometimes did not participate in the team's actions until he acquired his own unit.

During 2001, Sunrise worked with Dengeki Hobby Magazine on creating a new Eldran series for its 10th anniversary celebration by supplying them with the story board and images. Considered as a one-shot series, it was originally adapted into a manga before an OVA is animated.[ citation needed ] Almost 8 years after the pilot episode was aired, Daiteioh was included in Namco-Bandai and Banpresto's Super Robot Wars NEO . [1] Sunrise and Starchild Records released a high definition remastered version of the original short video of the series with newly recorded voices, bundled in the Eldran Series Blu-ray Box. [2]

Ambassador Magma is the title and protagonist of a manga and tokusatsu TV series created by Osamu Tezuka. The TV series, produced by P Productions, Seven Arts Television and Krantz Films, was aired on Fuji TV from July 4, 1966, to June 26, 1967, lasting a total of 52 episodes. It is the first color tokusatsu TV series in Japan, beating Tsuburaya Productions' Ultraman to the air by six days. The show later aired in the US, dubbed in English, as The Space Giants. Digital Manga crowdfunded the manga, and it is currently available for digital purchase on their Emanga site.

Ganbare, Kickers! is a romantic soccer kid manga drawn by Noriaki Nagai. It was published by Shogakukan in CoroCoro Comic magazine from 1985 to 1989. The series won the 1987 Shogakukan Manga Award for best children's manga. The story is usually classified as Comedy, Drama, Shōnen and Sports. Cover art can be seen here.

Chōdenji Robo Combattler V, also known as Super Electromagnetic Robot Com-Battler V, is a Japanese mecha anime television series produced by Toei Company and Nippon Sunrise that aired from 1976 to 1977. It is the first part of the Robot Romance Trilogy of Super Robot series created by Saburo Yatsude and directed by Tadao Nagahama. 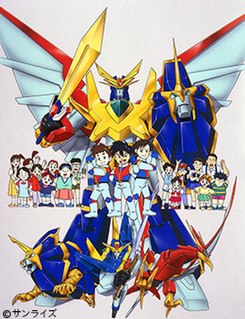 Matchless Raijin-Oh is a 51 episode Japanese anime television series, and the first series produced for the Eldran franchise funded by Tomy and produced by Sunrise. It aired in Japan from April 3, 1991 to March 25, 1992. The story revolves around a group of elementary school children who are given command of a mecha named Raijin-Oh and their efforts to defend the Earth from the evil Jaaku (evil) Empire.

Dengeki Sentai Changeman is a Japanese television series and the ninth installment of the Super Sentai metaseries. It aired from February 2, 1985 to February 22, 1986, running for 55 episodes, making it the second longest after Himitsu Sentai Goranger. It is the third Super Sentai series after J.A.K.Q. Dengekitai and Battle Fever J where the Yellow Ranger is absent, followed by 2013's Zyuden Sentai Kyoryuger and 2019's Kishiryu Sentai Ryusoulger.

Nekketsu Saikyō Go-Saurer is a 51-episode animated television series, and third series in the Eldran franchise funded by Tomy and produced by Sunrise. It aired in Japan from March 3, 1993 to February 23, 1994. The story revolves around a group of elementary school children who are given command of a mecha named Go-Saurer and their efforts to defend the Earth from the Kikaika Empire.

Genki Bakuhatsu Ganbaruger is a 47 episode animated shōnen mecha television series, and the second series produced for the Eldran franchise funded by Tomy and produced by Sunrise. It aired on TV Tokyo from April 1, 1992 to February 24, 1993. 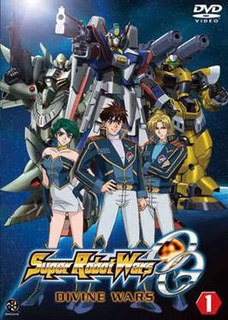 The Family's Defensive Alliance is an anime television series created and written by Shōji Kawamori. The series premiered in Japan on WOWOW between January 9, 2001 and March 29, 2001, spanning a total of 13 episodes. It centers on a dysfunctional family tasked with defending the Earth from alien invaders.

Kemeko Deluxe! is a Japanese manga series written and illustrated by manga artist Masakazu Iwasaki. The manga began serialization in the monthly shōnen manga magazine Dengeki Comic Gao! on October 27, 2005, and is published by MediaWorks. The first episode of the anime adaptation was broadcast on October 4, 2008. 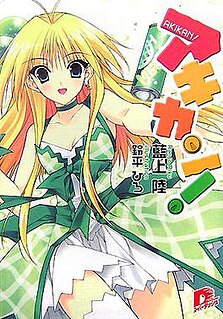 Akikan! is a Japanese light novel series about a group of anthropomorphic soda cans who do battle. It was created by Riku Ranjō, with illustrations by Hiro Suzuhira, known for her artistry in Shuffle!. The first novel was released on May 24, 2007, and as of April 24, 2009, eight volumes have been published by Shueisha under their Super Dash Bunko label. A manga adaptation began serialization in Ultra Jump on October 18, 2008, an anime adaptation began airing on January 3, 2009. On December 22, 2008, an early release of the first episode was streamed on the internet through Bandai Channel. On the day the final episode aired on March 28, 2009, an Akikan! OVA followed on October 23, 2009. At Anime Weekend Atlanta 2011, Sentai Filmworks announced that they have licensed both TV series and OVA and was released in 2012. 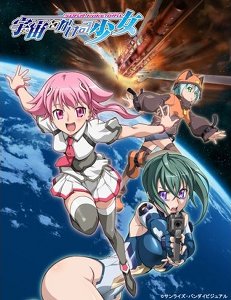 The Girl Who Leapt Through Space is a Japanese anime television series, created and produced by Sunrise. Based on the original concept by the Sunrise animation staff, the series is directed by Masakazu Obara and written by Jukki Hanada, overseeing a team of animators noted for their previous work on My-HiME and My-Otome.

Asuka Ōgame is a Japanese voice actress from Hiroshima Prefecture, Japan. She is affiliated with Sigma Seven. 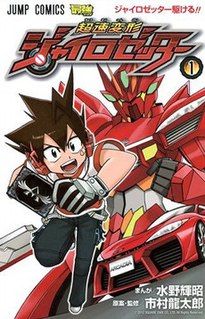 Chōsoku Henkei Gyrozetter is a media franchise by Square Enix which includes a series of arcade digital collectible card games, a Nintendo 3DS game, a manga series, and an anime television series.

Captain Earth is a 25-episode Japanese anime television series produced by Bones. It is directed by Takuya Igarashi and written by Yōji Enokido. It aired in Japan from April 5 to September 20. 2014 on MBS. The series follows high-school student Daichi Manatsu who starts working for the Globe organization to pilot a giant robot called the Earth Engine Impacter to protect the Earth from the invading alien force known as the "Kill-T-Gang", that intends to drain all the life force of mankind to empower their immortal existences.

Buddy Complex is a Japanese mecha anime television series produced by Sunrise. The series aired between January 5, 2014 and March 30, 2014. The first episode was pre-aired on December 29, 2013. A manga adaptation began serialization in ASCII Media Works' Dengeki Daioh from January 27, 2014. A 2-part sequel aired on September 29 and 30, 2014.