Kapellmeister ( /kəˈpɛlˌmaɪstər/ , also US: /kɑːˈ-/ , [1] [2] German: [kaˈpɛlˌmaɪstɐ] ) from German Kapelle (chapel) and meister (master), literally "master of the chapel choir" designates the leader of an ensemble of musicians. Originally used to refer to somebody in charge of music in a chapel, the term has evolved considerably in its meaning and is today used for denoting the leader of a musical ensemble, often smaller ones used TV, radio, and theatres.

In German-speaking countries during the approximate period 1500–1800, the word Kapellmeister often designated the director of music for a monarch or nobleman. For English speakers, it is this sense of the term that is most often encountered, since it appears frequently in biographical writing about composers who worked in German-speaking countries.

A Kapellmeister might also be the director of music for a church. Thus, Georg Reutter was the Kapellmeister at St. Stephen's Cathedral, Vienna, where his young choristers included both Joseph and Michael Haydn.

Becoming a Kapellmeister was a mark of success for professional musicians. For instance, Joseph Haydn once remarked that he was glad his father (a wheelwright) had lived long enough to see his son become a Kapellmeister. [3] The term also implied the possession of considerable musical skill. When the 18th-century actor and musician Joachim Daniel Preisler heard the famous soprano Aloysia Weber (Mozart's sister-in-law) perform in her home, he paid her the following compliment in his diary:

The well-known Mozardt is her brother-in-law and has taught her so well that she accompanies from a score and plays interludes like a Kapellmeister. [4]

By the end of the 18th century, many of the nobility had declined in their economic power relative to the newly prosperous middle class. Eventually, the maintenance of a Kapelle became too expensive for most nobles, which led to a decline in the number of Kapellmeister positions. A well-known instance occurred in 1790, when Prince Anton Esterházy succeeded his father Nikolaus and dismissed almost all of the latter's extensive musical establishment. [5] But Prince Anton was hardly alone in doing this; during this same period, "the steady decline in the number of orchestras supported by aristocratic families represented a ... change that affected all composers and their works." [6] This was a difficult time for musicians, who needed to find new ways to support themselves. For instance, Ludwig van Beethoven (1770–1827) never worked as a Kapellmeister but was supported by a somewhat unreliable combination of noble patronage, publication, and concert income.

The case of Mozart

Mozart never was a Kapellmeister in the sense given above. In 1787, he was given a paid position in the court of the Austrian Emperor, as Kammercompositeur ("chamber composer"), but authority in matters musical at the court was exercised primarily by Antonio Salieri. In reviews, diaries, and advertising, Mozart was commonly referred to as "(Herr) Kapellmeister Mozart". It seems that Mozart's prestige, along with the fact that he frequently appeared in public directing other musicians, led to the use of "Kapellmeister" as a term of respect. [7]

In April 1791, Mozart applied to become the Kapellmeister at St. Stephen's Cathedral and was designated by the City Council to take over this job following the death of the then-ailing incumbent, Leopold Hofmann. This never took place, since Mozart died (December 1791) before Hofmann did (1793). [8]

Variant spellings capellmeister and capelle, to refer to the orchestra or choir, [9] are sometimes encountered in English language works about composers who held the title. [10] [11] [12] [13]

The word Hofkapellmeister specified that the Kapellmeister worked at a nobleman's court (Hof); a Konzertmeister held a somewhat less senior position. [14]

Equivalent positions existed in other European countries and were referred to with equivalent names. In Finnish kapellimestari is still the primary word used of conductors.

(listed chronologically by date of birth)

In contemporary German, the term "Kapellmeister" has become less common than Dirigent ("conductor"). When used today it designates the director or chief conductor of an orchestra or choir. It suggests involvement in orchestra or choir policy (for example, selecting repertoire, concert schedules, and guest conductors) as well as conducting. In military settings it refers to a bandmaster. [16] The music director of the Leipzig Gewandhaus Orchestra traditionally holds the old-fashioned title Gewandhauskapellmeister. [17] [18] In other German opera houses, the term generally refers to a deputy conductor reporting to the Generalmusikdirektor ("General Music Director", usually also the chief conductor). An opera company may have several Kapellmeisters, ranked as Erste Kapellmeister (First...), Zweite Kapellmeister (Second...), etc.

The conductor Christian Thielemann has offered a nuanced account of the "Dirigent"/"Kapellmeister" distinction in contemporary usage. He suggests that "Kapellmeister" has unfairly acquired a sense of routine or failure to project glamour: "a Kapellmeister now describes a pale, meek figure beating time. A policeman on duty at the podium directing the musical traffic, no more." In fact, Thielemann, who is fully aware of the historical usage of the term, would himself prefer to be called a "Kapellmeister": "it implies such virtues as knowledge of a work, great ability, and dedication to the cause of music". [19]

The term "Kapellmeister Tradition" is commonly used to describe these qualities, as exemplified by such historically important conductors as Otto Klemperer, Klemens Krauss, and Erich Kleiber, in the sense that they have "paid their dues" on their way to international fame. [20] 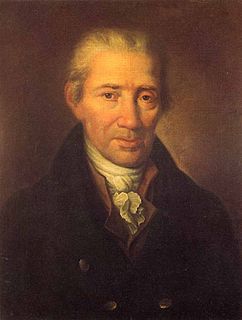 Johann Georg Albrechtsberger was an Austrian composer, organist, and music theorist, and one of the teachers of Ludwig van Beethoven. He was friendly with Haydn and Mozart.

Johann Michael Haydn was an Austrian composer of the Classical period, the younger brother of Joseph Haydn.

Mannheim school refers to both the orchestral techniques pioneered by the court orchestra of Mannheim in the latter half of the 18th century and the group of composers of the early classical period, who composed for the orchestra of Mannheim. The father of the school is considered to be the Bohemian composer Johann Stamitz. Besides him, two generations of composers wrote compositions for the orchestra, whose reputation was due to its excellent discipline and the individual skill of its players; the English traveler Charles Burney called it "an army of generals". Their performance style included new dynamic elements, crescendos and diminuendos. Composers of the Mannheim school played an important role in the development of the classical period's genres and of the classical symphony form.

Gottfried Freiherr van Swieten was a Dutch-born Austrian diplomat, librarian, and government official who served the Holy Roman Empire during the 18th century. He was an enthusiastic amateur musician and is best remembered today as the patron of several great composers of the Classical era, including Joseph Haydn, Wolfgang Amadeus Mozart, and Ludwig van Beethoven.

The composer Joseph Haydn is sometimes given the nickname "Papa" Haydn. The practice began in Haydn's lifetime and has continued to the present day. 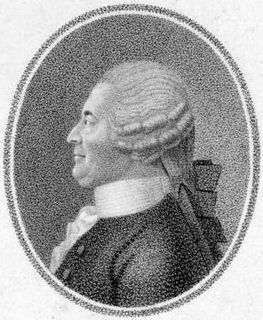 Johann Adam Joseph Karl Georg Reutter, during his life known as Georg Reutter the Younger was an Austrian composer. According to David Wyn Jones, in his prime he was "the single most influential musician in Vienna". 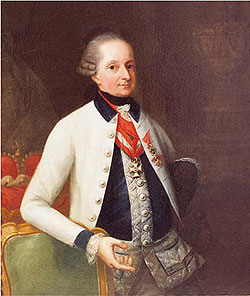 Nikolaus I, Prince Esterházy was a Hungarian prince, a member of the famous Esterházy family. His building of palaces, extravagant clothing, and taste for opera and other grand musical productions led to his being given the title "the Magnificent". He is remembered as the principal employer of the composer Joseph Haydn.

FranzXaver Richter, known as François Xavier Richter in France was an Austro-Moravian singer, violinist, composer, conductor and music theoretician who spent most of his life first in Austria and later in Mannheim and in Strasbourg, where he was music director of the cathedral. From 1783 on Haydn’s favourite pupil Ignaz Pleyel was his deputy at the cathedral.

The composers Wolfgang Amadeus Mozart(1756-1791) and Joseph Haydn(1732-1809) were friends. Their relationship is not very well-documented, but the evidence that they enjoyed each other's company and greatly respected each other's work is strong, and suggests that the elder Haydn acted, in at least a minor capacity, as a mentor to Mozart. Six string quartets by Mozart are dedicated to Haydn, the "Haydn" Quartets.

Gregor Joseph Werner was an Austrian composer of the Baroque period, best known as the predecessor of Joseph Haydn as the Kapellmeister of the Hungarian Esterházy family. Few of Werner's works survive to the present day, and he is mostly remembered for his troubled relationship with Haydn.

Count Morzin was an aristocrat of the Holy Roman Empire during the 18th century. He is remembered today as the first person to employ the composer Joseph Haydn as his Kapellmeister, or music director. The first few of Haydn's many symphonies were written for the Count.

Harmonie is a German word that, in the context of the history of music, designates an ensemble of wind instruments employed by an aristocratic patron, particularly during the Classical era of the 18th century. The Harmonie would be employed for outdoor or recreational music, or as a wind section of an orchestra. Music composed for Harmonie is often called Harmoniemusik.

The Gesellschaft der Associierten was an association of music-loving noblemen centered in Vienna and founded by Baron Gottfried van Swieten in 1786. The society sponsored concerts, often reviving music from the past, and also commissioned new works. 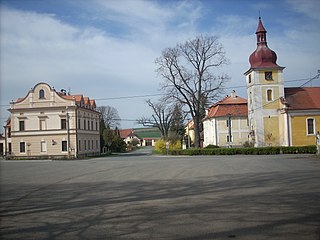 Dolní Lukavice is a municipality and village in Plzeň-South District in the Plzeň Region of the Czech Republic. It has about 1,000 inhabitants.