The Georgios Karaiskakis Stadium (Greek : Στάδιο Γεώργιος Καραϊσκάκης), commonly referred to as the Karaiskakis Stadium (Greek : Στάδιο Καραϊσκάκη, [staðio karaiˈskaki] ), is a football stadium in Piraeus, Attica, Greece, and the home ground of the Piraeus football club Olympiacos. With a capacity of 32,115, [2] [3] it is the largest football-only stadium and the second largest football stadium overall in Greece. It is named after Georgios Karaiskakis, a military commander of the Greek War of Independence, who is considered a national hero and was mortally wounded in the area.

It was used during the Athens 1896 Summer Olympics, as the Neo Phaliron Velodrome, where Frenchman Paul Masson took the three track cycling gold medals.

The stadium was totally demolished and built again from the beginning, facing a different direction. This complete reconstruction took a record time of only 14 months, finishing just in time for the Olympic Games. [9] After the last deal ended in 1998, Olympiacos is using the stadium once again, on a 49-year lease from 2003 until 2052 and is traditionally identified as the club's true home. In 2002, the president and owner of Olympiacos Socratis Kokkalis, when announced the project to rebuild Karaiskakis, expressed his wish for the new stadium to be also used by Ethnikos F.C., if they wanted, as Karaiskakis is the historic home of both Olympiacos and Ethnikos. Therefore, in the contract signed by the Hellenic Olympic Committee, the owner of the stadium, and Olympiacos, a clause was included, stating that should Ethnikos wish to return to the stadium, they may do so without sharing any significant maintenance or other stadium-related costs, as those are covered by Olympiacos. As of the 2010/11 season though, Ethnikos has not yet opted to do so.

The ticket sales average higher than any team's in recent decades for the Super League Greece history (rarely have they dropped under the 5,000 mark) and are not expected to drop in the foreseeable future.

Sales for national team matches had also been higher, but this was for the most part due to Greece's success in the Euro 2004. As of 2008 and after Greece's disappointing Euro 2008 performance, the attendance of national team matches dropped drastically, leading the Ministry of Sport to change the venue to Heraklion, Crete.

In June 2005, Karaiskakis stadium hosted a movie theatre (Ciné Karaiskakis) with a cinema screen that is 20 m long and 10 m wide, operating daily between 9 and 11 p.m. (6 and 8 p.m. UTC) and later, every weekend. The movie screen featured movies including Batman Begins and others. The stadium operated as a movie theatre for the last time on Saturday 13 August 2005.

Twenty-one supporters of Olympiacos lost their lives in "Gate 7" (Θύρα 7) of the stadium, after a game between Olympiacos and AEK Athens FC (that ended 6–0), on 8 February 1981; an incident widely known as the Karaiskaki Stadium disaster. In memory of this event, at the tribune where Gate 7 is now, twenty-one seats are black colored instead of red, shaping the number "7". A monument on the eastern side of the stadium bears the names of the twenty-one supporters killed on that day in the stadium. [10]

Karaiskakis Stadium is classified as a 4-star football stadium by the UEFA organisation, allowing it to host the UEFA Europa League Final if chosen. It hosts 40 VIP lounges and suites, that can hold up to 474 [11] persons, a press conference hall, that can hold up to 130 seats, 200 seats for press and media coverage, an entire shopping mall, with restaurants, cafés, retail and clothing stores and a gym.

The stadium also hosts Olympiacos Museum, dedicated not only to the history of the football club, but to the history of all the departments of the multiple European title-winning multi-sport club Olympiacos CFP. There are 10 automated ticket selling machines around the stadium enabling reservations through the internet or by phone. There is no extra charge for the parking area, which takes up to 1,000 [12] cars. Due to its design, the stadium's tribunes have the ability to empty within 7 minutes. The stadium also has restaurants and stores opened during concerts and games and sometimes open with the daily general timetable of most Greek stores and shops. 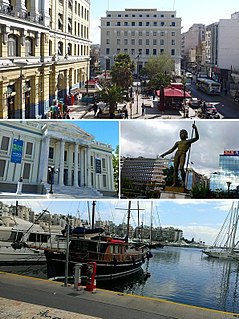 Piraeus is a port city within the Athens urban area, in the Attica region of Greece. It is located in the Athens Riviera, 8 kilometres southwest of Athens’ city centre, along the east coast of the Saronic Gulf. 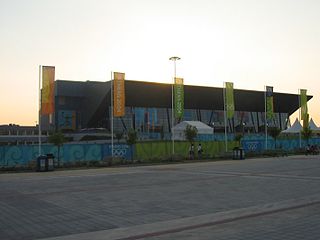 The Hellinikon Olympic Complex is situated at Hellinikon in the south Athens, approximately 16 kilometres from the Olympic Village. It was built on the site of the former Hellinikon International Airport for the staging of the 2004 Summer Olympics and 2004 Summer Paralympics. It consists of five separate venues.

Pampeloponnisiako Stadium is a stadium located in Patras, Greece. The stadium was originally built 1981 as National Stadium of Patras.

Georgios Kamaras Stadium is a multi-purpose stadium in Athens, Greece. It is currently used mostly for football matches and is the home stadium of Apollon Smyrnis. The stadium holds 14,200 and was built in 1948. It was used by Olympiacos for about 2 years (2002–2004) as home ground, due to the construction of their new stadium Karaiskaki. Since 2005. the stadium is named Georgios Kamaras, in honour of Georgios Kamaras, old glorious player of Apollon.

Ethnikos Piraeus 1923 Football Club is a Greek football club based in Piraeus and its parent sports club is Ethnikos OFPF. The club was officially formed in 1923 as Keravnos, but existed since 1922. One year later the club was renamed to Young Boys Titan, after some players' secession that formed Peiraikos Podosfairikos Omilos. The club was renamed to Ethnikos on 23 December 1924, after it merged with Peiraikos Podosfairikos Omilos.

The 1979–80 Alpha Ethniki was the 44th season of the highest football league of Greece. From that season Alpha Ethniki became the professional league. The season began on 30 September 1979 and ended on 25 May 1980 with the play-off matches. Olympiacos won their 21st Greek title and their first one in five years. 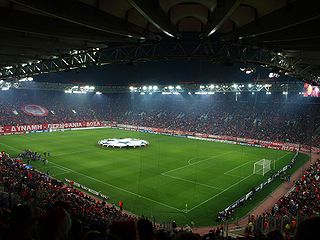 Olympiacos F.C. has a long presence in UEFA competitions. They made their debut on 13 September 1959, in a game against Milan at the Karaiskakis Stadium for the 1959–60 European Cup, being the first Greek team to compete in a European competition. Olympiacos was also the first Greek club to advance to the next round of any European competition, eliminating Zagłębie Sosnowiec for the 1963–64 European Cup Winners' Cup. Their best European campaigns are their presence in the 1998–99 Champions League quarter-finals, where they lost a semi-final spot in the last minutes by Juventus, and in the 1992–93 European Cup Winners' Cup quarter-finals, losing to Atlético Madrid.

Ethnikos Piraeus is a Greek multisport club based in Piraeus. It was founded in 1923. The full name of the club is Ethnikos Omilos Filathlon Pireos/Phalirou or Ethnikos OFPF, which means National Club of Fans of Piraeus and Phalerum. Ethnikos has sections in football, basketball, volleyball, waterpolo, swimming and field hockey. In most of these sports, Ethnikos has won titles and honours. The most successful section is the water polo, which has won many titles in both men's and women's teams. Nevertheless, the most popular is the football team, which had a remarkable tradition in the first division in the past.

The Derby of the eternal rivals, also called Mother of all battles, is a football local derby in the Athens - Piraeus urban area between the most successful clubs of Greece, Olympiacos and Panathinaikos. The rivalry between the clubs and their fans is intense, thus this derby has always been a classic for the Greek capital, as well as the whole of Greece, the most prestigious in the country. The derby is traditionally included among the world's top 10 greatest football derbies by the international media, along with rivalries such as Real Madrid–Barcelona, Liverpool–Manchester United and Boca Juniors–River Plate. American network CNN has ranked the Olympiacos – Panathinaikos derby among the ten greatest football rivalries of all-time In October 2014, BBC named the Olympiacos – Panathinaikos derby as "Europe's maddest derby" and in September 2019, Daily Mirror ranked the derby of the eternal enemies as the fifth most important derby in the world.

Yiannis Andrianopoulos was a Greek Football Legend and one of the founding members of Greece's most successful football club, Olympiacos CFP.

The Stadio Eirinis kai Philias or Peace and Friendship Stadium, commonly known by its acronym SEF, is a multi-purpose indoor arena that is located in Piraeus, on the coastal zone of Attica, Greece. The arena is mostly known for being the home to EuroLeague team Olympiacos, and is the central venue of the Faliro Coastal Zone Olympic Complex. It opened in 1985.

The 2012–13 Football League is the second division of the Greek professional football system and the third season under the name Football League after previously being known as Beta Ethniki. Its regular season began on 28 September 2012 and will end on 9 June 2013. The promotion play-offs, are scheduled to take place after regular season.

The 2013–14 Football League is the second division of the Greek professional football system and the fourth season under the name Football League after previously being known as Beta Ethniki. This is the first season after 1982–83 that the league has more than one groups. The groups are created based on geographical criteria.

The Piraeus derby, is an association football rivalry between Ethnikos Piraeus and Olympiacos, the 2 teams representing the city of Piraeus.