Last updated July 26, 2020
This article is about District of Adana. For other uses, see Karataş (disambiguation).
City in Mediterranean, Turkey

Karataş (Greek : Μέγαρσος, Mègarsos) is a small city and a district in Adana Province, on the Mediterranean coast of Turkey, 47 km from the city of Adana, between the rivers of Seyhan and Ceyhan, the Pyramos of Antiquity. The city of Karataş has a population of 8,483 (in 2010), with another 13,000 living in surrounding villages.

The area has been inhabited from at least Hittite times and probably earlier. It was later part of the Assyrian province of Quwê (Que). By the time of the Greeks, who knew the city as Megarsos/Magarso, there was a port here at the mouth of the navigable Pyramos, supplying an important military and trading route into the plain of Cilicia, and also providing access to the sea for the river towns, like Mallus. In 333 BCE, just before the battle of Issus, Alexander the Great sacrificed here at a temple that, by interpretatio graeca , he took to be of Athena; the "Athena of Magarsos" who appears on Hellenistic coins has been diagnosed, from her pose and the attributes that surround her, to have Mesopotamian connections. [3] Robin Lane Fox [4] recognizes the origin of the cult site in the victories of Sennacherib, who instituted the shrine in 696 BCE following a sea battle with Greeks off the mouth of the river; [5] he dedicated it to his martial goddess, Anat, or Ishtar.

The Romans rendered Magarsos as Megarsus. The port was later conquered by the Arab armies during the growth of Islam and then by the Ottomans in 1517.

Karataş was occupied by French troops during World War I.

Today Karataş is known for its fishing industry and as a place that Adana's inhabitants can easily access to relax on the beach. There are also rich farmlands behind the coast where cotton, watermelons, melons and other crops are grown.

The well-known footballer Hasan Şaş is from Karataş and has a street named after him in memory of his excellent performance for Turkey national football team during the 2002 World Cup.

Brussels-based painter Nazife Can is also from Karataş. 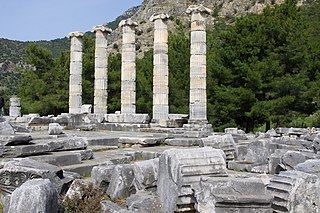 Priene was an ancient Greek city of Ionia located at the base of an escarpment of Mycale, about 6 kilometres (3.7 mi) north of what was then the course of the Maeander River. It was 67 kilometres (42 mi) from ancient Anthea, 15 kilometres (9.3 mi) from ancient Aneon and 25 kilometres (16 mi) from ancient Miletus. The city was built on the sea coast, overlooking the former Latmian Gulf of the Aegean. It was developed on steep slopes and terraces extending from sea level to a height of 380 metres (1,250 ft) above sea level at the top of the escarpment. Because of siltation from the river filling the bay over several centuries, the city is now an inland site. It is located at a short distance west of the modern village Güllübahçe Turun in the Söke district of Aydın Province, Turkey.

Anamur is a town and district of the province of Mersin, on the Mediterranean coast of southern Turkey, between Antalya and the city of Mersin.

Finike, the ancient Phoenix or Phoinix, also formerly Phineka, is a district on the Mediterranean coast of Antalya Province in Turkey, to the west of the city of Antalya, along the Turkish Riviera. It is located on the southern shore of the Teke peninsula, and the coast here is a popular tourist destination. However, Finike is best known for its oranges, the symbol of the town. 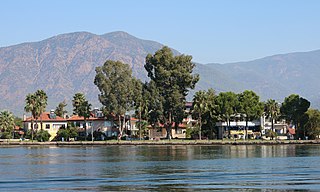 Köyceğiz is a town and district of Muğla Province in the Aegean region of Turkey.

Antiochia ad Pyramum was an ancient coastal city of Cilicia, on the Pyramus river, in Anatolia. It was the successor settlement to Magarsa. The location of the city is on the Karataş Peninsula, Adana Province, Turkey, a few km from the city of Karataş. The course of the Pyramus has changed markedly since ancient times and the location of the ruins is no longer adjacent to the river, but decidedly west of its present course. The formerly important ancient site of Mallus lies a few km inland from Antiochia ad Pyranum along the former course of the Pyramus.

Yumurtalık is a small city and a district in Adana Province of Turkey. It was formerly called Aegeae, Ayas or Laiazzo. It is a Mediterranean port at a distance of about 40 km (25 mi) from Adana city. Yumurtalık's population does not exceed 5,000 in winter, but in summer, it rises to 30 to 40,000 people since many inhabitants of Adana have holiday homes here. There are also many daily visitors during the holiday season.

Mallus was an ancient city of Cilicia Campestris lying near the mouth of the Pyramus river, in Anatolia. In ancient times, the city was situated at the mouth of the Pyramus, on a hill opposite Magarsa which served as its port. The district was called from it, Mallotis. The location of the site is currently inland a few km from the Mediterranean coast on an elevation in the Karataş Peninsula, Adana Province, Turkey, a few km from the city of Karataş. 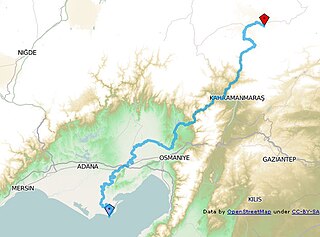 The Ceyhan River is a river in Anatolia in the south of Turkey. 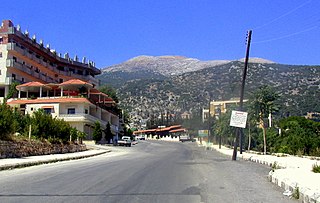 Jebel Aqra, properly Jebel al-ʾAqraʿ, also known as Mount Casius, is a limestone mountain located on the Syrian–Turkish border near the mouth of the Orontes River on the Mediterranean Sea. Its Turkish side is also known as Mount Kel. Rising from a narrow coastal plain, Jebel Aqra is a mariners' landmark which gathers thunderstorms.

Akyatan Lagoon is a 14700-hectare wetland ecosystem that is designated as Wetland of International Importance by Ramsar Convention. A major stop over for migrating birds, Akyatan is recognized as an Important Bird Area by BirdLife International. It is the single largest green turtle rookery at the Mediterranean, holding 43% of the Mediterranean nesting population.

Gümüşyazı is a village in the District of Karataş, Adana Province, Turkey.

Karataş is a village in the District of Karataş, Adana Province, Turkey.

Sirkenli is a village in the District of Karataş, Adana Province, Turkey. 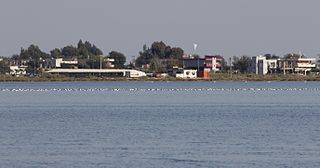 Lake Tuzla is a lake in Karataş ilçe (district) of Adana Province. It is to the west of Akyatan Lagoon and to the east of Seyhan River. The mid point of the lake is at 36°42′N35°02′E It is a typical lagoon separated from the Mediterranean Sea by a narrow strip. There are channels through the strip and the lake is used as a fish pond. Annual fish production is about 40 tonnes. The salinity of the lake fluctuates depending on the season.

Magarsa, or Magarsus or Magarsos (Μάγαρσος), or Megarsus or Megarsos (Μέγαρσος), was a town in the eastern part of ancient Cilicia, situated on a height close to the mouth of the river Pyramus. Alexander the Great, previous to the Battle of Issus, marched from Soli to Megarsus, and there offered sacrifices to Athena Megarsis, and to Amphilochus, the son of Amphiaraus, the reputed founder of the place. It seems to have formed the port of Mallus. It was later re-founded and renamed in Hellenistic times as Antiochia ad Pyramum.