Karate at the 2005 Southeast Asian Games

Karate at the 2005 Southeast Asian Games took place in the Mandaue Coliseum, Mandaue City, Cebu, Philippines. The participants were competing in different weight categories in both the men's and women's competitions. The event was held from November 27–29. [1] 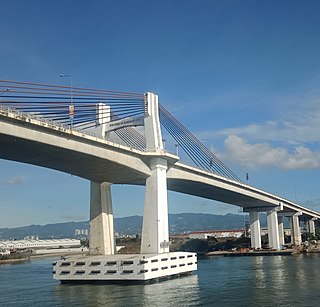 Mandaue, officially the City of Mandaue, is a 1st class highly urbanized city in the island province of Cebu in the region of Central Visayas, Philippines. According to the 2015 census, it has a population of 362,654 people. 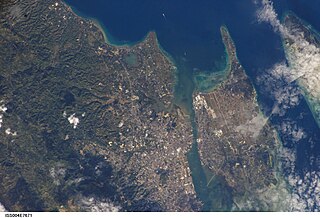 Metropolitan Cebu, or simply Metro Cebu,, is the main urban center of the province of Cebu in the Philippines. Metro Cebu is located along the central eastern portion of the island including the nearby island of Mactan. It accounts for 20 percent of the land area and 61.5 percent of the population of the entire island of Cebu.

The 1991 Southeast Asian Games, officially known as the 16th Southeast Asian Games, was a multi-sport event held in Manila, the Philippines from 24 November to 3 December 1991, with 28 sports featured in the games. This was the second time that the country hosted the games and its first since 1981. It was officially opened by President Corazon Aquino at the Rizal Memorial Stadium in Manila through a colorful opening ceremony. It was the only SEA Games at that time where the overall championship was heavily contested. The deciding medal came from the last sporting event - women's marathon where Indonesia got the gold medal.

The 1993 Southeast Asian Games, officially known as the 17th Southeast Asian Games, was a multi-sport event held in Singapore from 12 to 20 June 1993 with 29 sports featured in the games. The games were opened by Wee Kim Wee, the President of Singapore. This was the third time Singapore hosted the games and its first since 1983. Previously, Singapore also hosted the games for the first time in 1973. The final medal tally was led by Indonesia, followed by Thailand, the Philippines and host Singapore.

Judo at the 2005 Southeast Asian Games took place in the Mandaue Coliseum, Mandaue City, Cebu, Philippines. The participants competed for 16 gold medals with eight different weight categories in both the men's and women's competitions. 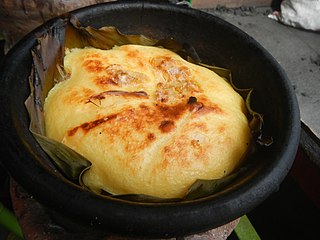 Bibingka is a type of baked rice cake from Indonesia and Philippines. It is usually eaten for breakfast, especially during the Christmas season. It is traditionally cooked in clay pots lined with leaves. It is a subtype of kakanin in Philippine cuisine. Bibingka is also found in East Timor and Christian communities in eastern Indonesia.

Gretchen Malalad is a Filipina 2005 Southeast Asian Games karate gold medalist and a former beauty pageant contestant in Binibining Pilipinas 2003 where she emerged Ms. Talent and Ms. Red Bull Supreme. She is native from the Duyay, Boac, province of Marinduque. She was also a housemate in Pinoy Big Brother: Celebrity Edition.

The Philippine Karatedo Federation N.S.A., Inc. (PKF-NSA) is the governing body claiming jurisdiction over the sport of karate in the Philippines.

Kiyomi Watanabe, is a Japanese-Filipino judoka who has represented the Philippines in international competitions.

Cristina Ramos-Jalasco is a sports executive and former international footballer.

Karate Pilipinas Sports Federation, Inc. is the local governing body for the sport of Karate in the Philippines. KP was formed in early 2018, and subsequently recognized by the World Karate Federation as a temporary member in July 2018, potentially replacing the embattled NSA for Karate, the Philippine Karatedo Federation–N.S.A., Inc. (PKF-NSA), which was withdrawn in April 2018 from WKF due to alleged malversation of training allowance of athletes competed in the 2017 Southeast Asian Games. KP is also recognized by the Asian Karatedo Federation.

The karate competitions at the 2019 Southeast Asian Games in Philippines were held at World Trade Center Metro Manila from 7 to 9 December 2019.

Junna Villanueva Tsukii is a Filipino-Japanese karateka. She won the gold medal in the women's kumite 50 kg event at the 2019 Southeast Asian Games held in the Philippines.

Monsicha Tararattanakul is a Thai karateka. In 2018, she won one of the bronze medals in the women's kata event at the 2018 Asian Games held in Jakarta, Indonesia.

Ahmad Zigi Zaresta Yuda is an Indonesian karateka. He won the gold medal in the men's individual kata event at the 2019 Southeast Asian Games held in Manila, Philippines.

Teerawat Kangtong is a Thai karateka. In 2019, he won the gold medal in the men's kumite +75 kg event at the 2019 Southeast Asian Games held in Manila, Philippines.

Orencio James Virgil "James" De los Santos is a Filipino karate practitioner who competes in kata events. He has competed in the Asian Games and the Southeast Asian Games.