Goeyvaerts was born in Antwerp, where he studied at the Royal Flemish Music Conservatory; he later studied composition in Paris with Darius Milhaud and analysis with Olivier Messiaen. He also studied ondes Martenot with Maurice Martenot, who invented the instrument. [1]

In 1951, Goeyvaerts attended the famous Darmstadt New Music Summer School where he met Karlheinz Stockhausen, who was five years younger. Both were devout Catholics and found ways of integrating religious numerology into their serial compositions. They found themselves deep in conversation, and performed a movement from Goeyvaerts's "Nummer 1", Sonata for Two Pianos, in the composition course by Theodor Adorno there. They were both astonished upon hearing for the first time Messiaen's "Mode de valeurs et d'intensités" (from Quatre études de rythme ), in a recording by the composer which Antoine Goléa played at a lecture. These experiences together convinced Stockhausen he should study with Messiaen.[ citation needed ]

Goeyvaerts became very excited in 1952 when he learned that Stockhausen had access in Paris to a generator of sine waves. Goeyvaerts saw them as an important discovery for music: the purest sound possible. At the time, Stockhausen did not share his enthusiasm, owing partly to the inability with the equipment at hand to superimpose sine tones. Only later, after taking up his new post at the NWDR Electronic Music Studio in Cologne, did Stockhausen find more suitable equipment, in July 1953. [2] One of the first works produced there was Goeyvaerts's Nr. 5 with Pure Tones , which Stockhausen helped his friend to realize. (When Stockhausen seemingly abandoned his work with sine waves and returned to writing compositions for solo piano, Goeyvaerts felt that Stockhausen was abandoning an important discovery and took up the matter from a philosophical point of view himself.)[ citation needed ]

There has been some controversy about who wrote the first European "total" serial composition. His Nummer 2 (1951) for 13 instruments is one of the contenders, [3] as is his Nummer 1 (1950) Sonata for Two Pianos, and the Sonata for Two Pianos by Michel Fano (1950), depending on definitions of "total serialism". [4]

After withdrawing from the musical world for a while, he accepted a position in 1970 at the Institute for Psychoacoustic and Electronic Music (IPEM) in Ghent, which led to several other prestigious appointments in Belgium. His works from after 1975 take on aspects of minimalism, the best-known examples being his series of five Litanies (1979–82) and his final work, the opera Aquarius (1983–92). Though minimalism is ordinarily thought of as a reaction against serialism, for Goeyvaerts both techniques were merely subcategories of a non-dynamic, "static music". [5] Analyses of his early serial compositions (especially the electronic Nr. 4, met dode tonen [with dead tones] and Nr. 5, met zuivere tonen [with pure tones]) reveal how close the connections actually are. [6] Goeyvaerts died suddenly in 1993 in his home city of Antwerp.

Schubert: Thematic Catalogue of all his Works in Chronological Order, also known as the Deutsch catalogue, is a numbered list of all compositions by Franz Schubert compiled by Otto Erich Deutsch. Since its first publication in 1951, Deutsch numbers are used for the unique identification of Schubert's compositions.

Nummer 2 for thirteen instruments is a composition written in 1951 by the Belgian composer Karel Goeyvaerts.

Lucien Goethals was a Belgian composer. 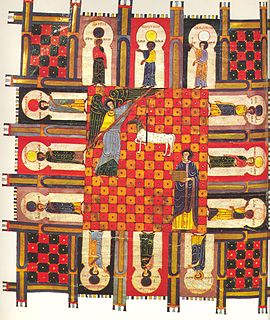 Aquarius is an opera for eight sopranos, eight baritones, and orchestra by Karel Goeyvaerts. It was begun in 1983 and completed in April 1992, to a libretto by the composer in eight languages, incorporating lines from the Revelation of St. John.

The Konkrete Etüde is the earliest work of electroacoustic tape music by Karlheinz Stockhausen, composed in 1952 and lasting just three-and-a-quarter minutes. The composer retrospectively gave it the number "1⁄5" in his catalogue of works.

Marco Facoli, Venice, was an Italian organist, harpsichordist and composer.

Pour que les fruits mûrissent cet été is a composition by the Belgian composer Karel Goeyvaerts, for seven musicians playing fourteen Renaissance instruments. It was composed either in 1975 or 1976. A second version for modern instruments was made in 1988.