Karkidaka Vavu (Malayalam: കർക്കിടക വാവ്) or ‘Karkidaka Vavu Bali’ is a set of Hindu rituals performed on a specific summer day in the state of Kerala, India by adherents for their deceased ancestors.

On the day of vavu or Amavasi (no moon day) people gather on the riverbanks and beaches to offer bali. Varkala Papanasam beach is also one of the major religious destinations on the day. People believe that the departed souls attain moksha (liberation) if the ritualistic homage is performed that day.

This day is also known as ‘Vavu Bali’ and is held in the month of Karkidakam in the Malayalam calendar. In the English calendar, the date falls in the month of July to August. [1] [2] [3]

Varkala, also known as The Pearl of the Arabian Sea, is a municipality in the Thiruvananthapuram district, situated in the Indian state of Kerala. Varkala is home to 3% of the total urban population of the district. It is the headquarters of Varkala Taluk and one among the oldest municipalities of Kerala established in 1980. It is the second largest coastal city in the district after the state capital and northern suburb of Trivandrum City. It is located 36 kilometres north of Trivandrum, which is the capital and largest metropolitan city of Kerala and 28 km south of Kollam City. 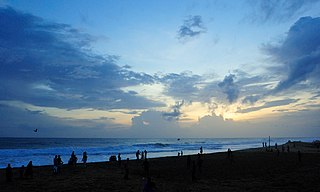 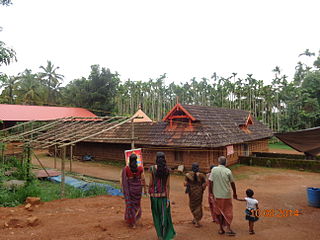 Ramapuram is a suburb of Malappuram in the Indian state of Kerala. Ramapuram is 8 km from the district HQ city Malappuram towards Palakkad on National Highway-966. The Malappuram showrooms of both TOYOTA and NISSAN are located at Panangangara, Ramapuram in Puzhakkattiri Gramapanchayat. Temples of lord Sri Rama, Sita, Lakshmana, Bharatha and Sathrughna are within a range of two kilo meters. During Karkidaka month of Malayalam calendar thousands of devotees from across Kerala come here for Nalambala Darshan. Now efforts are being done to recover the lost Sita Devi temple. 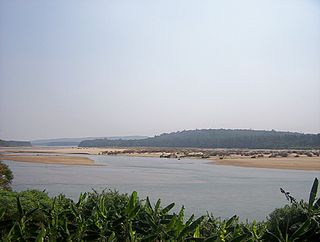 Tirunavaya, also spelled as Thirunavaya, is a census town in Malappuram, Kerala. Situated on the northern bank of Bharatappuzha, it is one of major Hindu pilgrimage centres in Kerala. Tirunavaya, home to Tirunavaya Temple and temples of Siva and Brahma, is one of the most prominent places for Bali tarpana on Karkitaka vavu in Kerala. 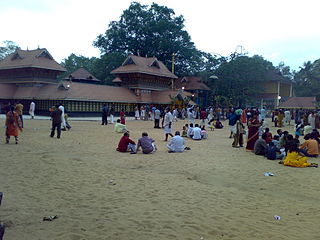 Chirayinkeezhu is a panchayat in Thiruvananthapuram district in the Indian state of Kerala. It was also hometown of famous Malayalam Film actor Prem Nazir. It is the seat of Chirayinkeezhu taluk.

Kappil is a tourist place in Thiruvananthapuram district, Kerala state, India. It is located in Edava Panchayat of Varkala Taluk at the cost of Arabian Sea. It is 8km North from Varkala city centre. Varkala Railway Station is major railway station near Kappil.

Chirakkadavu Mahadevar Temple is situated between the Kollam-Theni route of the National Highway 183, about 32 km east of the Akshra Nagari, Kottayam city and 3 km south of Ponkunnam en route to Manimala and Erumely. 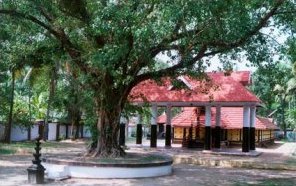 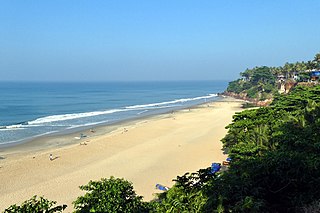 Varkala Beach, also known as Papanasham Beach, and Pearl of Arabian Sea is a cliff beach situated in the coastal city of Varkala in Thiruvananthapuram District, India. It is situated 39km north of Trivandrum the capital and largest city of Kerala. The beach skirts the Arabian Sea, part of the Indian Ocean. Other beaches in the town include Varkala Black Beach, Odayam Beach, Kappil Beach, and Aliyirakkam Cliff Beach. The word "papanasham" means to wash away sins. The nearest airport to the beach is Trivandrum International Airport which is situated 40km away from Varkala Town 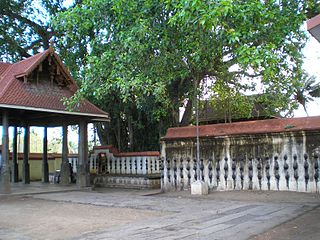 Thiruvallam Sree Parasurama Swami Temple is one of the most ancient temples of South India. It is situated on the banks of Karamana River near Thiruvallam, Thiruvananthapuram. It is the only temple in Kerala dedicated to Lord Parasurama. The temple is 6 km from Kovalam Beach and 5 km from Trivandrum International Airport and 3 km from Thiruvananthapuram.3 km from Attukal Temple 2 km from Pazhanchira Devi Temple and 1km from Sree Alukadu Devi temple. This heritage structure is placed under the list of monuments of national importance.

Thirumullavaram is a part of Kollam UA in the state of Kerala, a state in south India. It is situated 6 km north of the city of Kollam. It is best known for a calm beach safe for swimming. Discovery Channel has selected Thirumullavaram beach as one of the 10 beautiful beaches in the world.

Papanasam is a town in Thanjavur district in the Indian state of Tamil Nadu. It may also refer to:

Thirumullavaram Beach, is one of the popular beaches in the city of Kollam and a tourist destination in the state of Kerala. The beach is situated at Thirumullavaram, an important neighbourhood of Kollam city. The beach is very famous for conducting the Karkidaka Vavubali rituals. Thousands of devotees arrive on the beach to perform the Vavubali Tharpanam every year. It is one of the most attractive beaches located in South India. 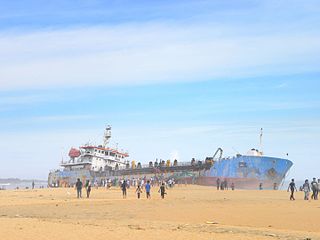 Mundakkal Beach, is one of the popular beaches in the city of Kollam and a famous tourism spot in Kerala. The beach is situated at Mundakkal, an important neighbourhood and Cashew processing hub in Kollam. Mundakkal beach became world famous after the dredger ship, 'Hansitha', washed on the shore on 21 June 2016. Scrapping of the dredger ship started on 18 October 2017. The beach is also known as 'Mundakkal Papanasham Beach'. Devotees believe that a dip in the waters of Mundakkal Papanasham Beach will wash off all the sins in one's life.

Varakkal Devi Temple is one of the famous Devi temples in Kozhikode Dt of Kerala. The main deity of the temple is Durga Devi (Bhagawathy). The temple also has sub deities of Ganapati, Dakshinamoorthy and Sree Ayyappan. 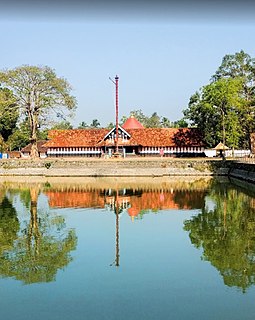 Tirunettur Mahadeva Temple is located at Vyttila village in Ernakulam district. The temple have two main deities, Sri Parameswara and Maha Vishnu. Deities having separate temple complex; Lord Sri Parameswara in the form of Sri Rudra and Maha Vishnu in the form of Vaikundeswara. Both deities are facing east. It is believed that Shiva temple is one of the 108 Shiva temples of Kerala and is installed by sage Parasurama dedicated to Lord Shiva.