Karl Pavlovich Bryullov (Russian : Карл Па́влович Брюлло́в; 12 December 1799 – 11 June 1852), original name Charles Bruleau, [1] also transliterated Briullov and Briuloff, and referred to by his friends as "Karl the Great", [2] [3] was a Russian painter. He is regarded as a key figure in transition from the Russian neoclassicism to romanticism.

Karl Bryullov was born on December, 12th (23), 1799 in St. Petersburg, [1] in the family of the academician, woodcarver, and engraver Pavel Ivanovich Briullo (Brulleau, 1760—1833) who was of Huguenot descent. He felt drawn to Italy from his early years. Despite his education at the Imperial Academy of Arts (1809–1821), Bryullov never fully embraced the classical style taught by his mentors and promoted by his brother, Alexander Bryullov. After distinguishing himself as a promising and imaginative student and finishing his education, he left Russia for Rome where he worked until 1835 as a portraitist and genre painter, though his fame as an artist came when he began doing historical painting.

His best-known work, The Last Day of Pompeii (1830–1833), is a vast composition compared by Pushkin and Gogol to the best works of Rubens and Van Dyck. It created a sensation in Italy and established Bryullov as one of the finest European painters of his day. After completing this work, he triumphantly returned to the Russian capital, where he made many friends among the aristocracy and intellectual elite and obtained a high post in the Imperial Academy of Arts.

An anecdote concerning Bryullov appeared in Leo Tolstoy's essay "Why Do Men Stupefy Themselves?" and later in the same author's book What Is Art? .

While teaching at the academy (1836–1848) he developed a portrait style which combined a neoclassical simplicity with a romantic tendency that fused well, and his penchant for realism was satisfied with an intriguing level of psychological penetration. While he was working on the plafond of St Isaac's Cathedral, his health suddenly deteriorated. Following advice of his doctors, Bryullov left Russia for Madeira in 1849 and spent the last three years of his life in Italy. He died in the village of Manziana near Rome and is buried at the Cimitero Acattolico there. 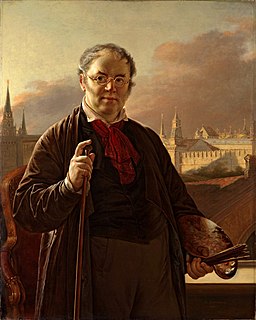 Vasily Andreevich Tropinin was a Russian Romantic painter. Much of his life was spent as a serf; he didn't attain his freedom until he was more than forty years old. Three of his more important works are a portrait of Alexander Pushkin and paintings called The Lace Maker and The Gold-Embroideress. 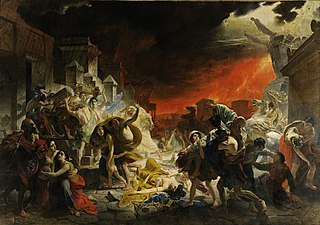 The Last Day of Pompeii is a large history painting by Karl Bryullov produced in 1830–1833 on the subject of the eruption of Mount Vesuvius in AD 79. It is notable for its positioning between Neoclassicism, the predominant style in Russia at the time, and Romanticism as increasingly practised in France. The painting was received to near universal acclaim and made Bryullov the first Russian painter to have an international reputation. In Russia it was seen as proving that Russian art was as good as art practised in the rest of Europe. Critics in France and Russia both noted, however, that the perfection of the classically modelled bodies seemed to be out of keeping with their desperate plight and the overall theme of the painting, which was a Romantic one of the sublime power of nature to destroy man's creations.

Alexander Andreyevich Ivanov was a Russian painter who adhered to the waning tradition of Neoclassicism but found little sympathy with his contemporaries. He was born and died in St. Petersburg.

Orest Adamovich Kiprensky was a leading Russian portraitist in the Age of Romanticism. His most familiar work is probably his portrait of Alexander Pushkin (1827), which prompted the poet to remark that "the mirror flatters me".

Anton Pavlovich Losenko was a russian neoclassical painter and academician who lived in Imperial Russia and who specialized in historical subjects and portraits. He was one of the founders of the Imperial Russian historical movement in painting. 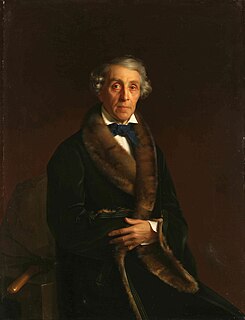 Count Fyodor Petrovich Tolstoy was a Russian artist who served as Vice-President of the Imperial Academy of Arts for forty years (1828–1868). His works — wax-reliefs, watercolours, medallions, and silhouettes — are distinguished by a cool detachment and spare and economical classicism.

Nikolai Tikhobrazov (1818–1874) was a Russian painter, known primarily for his history paintings and genre scenes. He studied at the Academy in St. Petersburg under Karl Bryullov, gaining the title of Academician in his own right in 1852.

Fyodor (Fidelio) Antonovich Bruni was a Russian artist of Italian descent who worked in the Academic style. 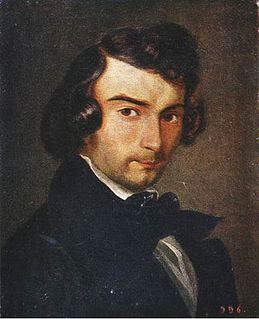 Apollon Nikolayevich Mokritsky was a Russian-Ukrainian painter of the Biedermeier period of Realist art. From 1849, he was a full member of the Saint Petersburg Academy of Arts.

Bogdan Pavlovich Willewalde was a Russian artist, academic, emeritus professor of military art, and a fellow of the Imperial Academy of Arts.

Grigory Grigoryevich Chernetsov was a Russian painter. He is notable mainly for landscapes of various parts of Russia, produced during his travels, but he also was active as portrait and genre painter.

Cosroe Dusi was an Italian painter in the Neoclassical style, active for many years in St Petersburg, Russia, painting mainly sacred and historical subjects. Dusi was nicknamed by his contemporaries the "modern Tintoretto", for his liveliness of invention and rapidity at painting.

Luigi or Louis Rubio was an Italian painter, active in both Neoclassicism but later Romantic styles, painting mainly historic-mythologic canvases, as well as some genre subjects, and portraits. His works harked back to the Troubadour style twenty years earlier. 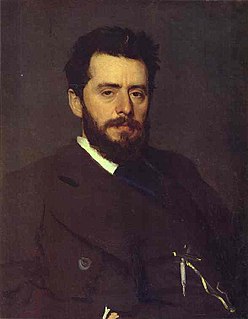 Pavel Aleksandrovich Brullov, also Briullov or Bryullov was a Russian landscape painter and professor of architecture.

Pimen Nikitich Orlov was a Russian painter in the Classical style. He worked in a wide variety of genres and spent most of his career in Italy.

Alexander Alexeyevich Agin was a Russian painter, illustrator and draftsman.