Karl Jamshed Khandalavala (16 March 1904 – 23 December 1995) [1] [2] was an Indian Parsi art connoisseur, lawyer, and an Indian Air Force officer. He was a long time trustee and chairman of erstwhile Prince Wales Museum, Mumbai. He was awarded with Padma Shri, the fourth highest civilian award in India, in 1970, for his contribution to arts. He was also a recipient of Lalit Kala Akademi fellowship in 1980. [3]

As a lawyer, he had famously represented the defense in the case of K. M. Nanavati v. State of Maharashtra. [4]

Kanayi Kunhiraman is an Indian sculptor, best known for his outsize sculptures such as Yakshi of Malampuzha Dam Gardens, Jalakanyaka at Shankumugham Beach and Mukkola Perumal trinity in Kochi. He is a protege of K. C. S. Paniker and a former chairman of the Lalit Kala Academy, India's national academy of fine arts. The Government of Kerala awarded him the inaugural Raja Ravi Varma Award in 2005. He is also a recipient of the Thikkurissy Award and the inaugural MS Nanjunda Rao National Award of the Karnataka Chitrakala Parishath. 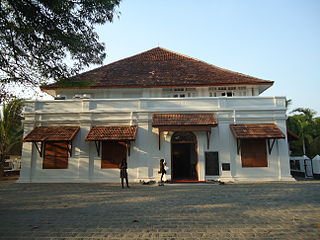 Kerala Lalithakala Academy for Fine Arts is an autonomous body which was established in 1962 to promote art and artistic heritage, based at Thrissur in Kerala. Nemom Pushparaj is the newly appointed chairman of Kerala Lalitha Kala Akademi.

Pratiksha Apurv is an Indian painter, whose work is based on her uncle Osho's teachings. Before moving to painting, she was a successful fashion designer. Apurv won the National Award 2015-16 given by the Lalit Kala Akademi, Ministry of Culture for her painting 'Cosmic Balance', and has exhibited her artwork across the country. Her artwork has featured in books and magazines, and in 2018 she wrote and illustrated her own book, The Mystic and Her Colours.

Bhabesh Chandra Sanyal commonly known as B. C. Sanyal, the doyen of modernism in Indian art, was an Indian painter and sculptor and an Art teacher to three generations of artists. During his lifetime he not just saw the partition of the Indian subcontinent three times, 1905, 1947 and 1971, but also witnessed 20th century Indian art in all its phases. His notable paintings include The flying scarecrow, Cow herd, Despair and Way to peace, which depicts Mahatma Gandhi with a Hindu and a Muslim child.

Saryu Vinod Doshi is an Indian art scholar, art historian, academic and curator, known for her erudition in Indian miniature paintings and Jain art. She is the founder director of the National Gallery of Modern Art, Mumbai and a former pro-tem chairman of the Lalit Kala Akademi, New Delhi. She is the author of several books including Masterpieces of Jain Painting, a monograph on selected Jain art pieces. The Government of India awarded her the fourth highest civilian award of the Padma Shri, in 1999.