The Karlal (Urdu کرڑال also known as Kard'al, Karaal, Karhral, or Kiraal) oral tradition states that the tribe is descended from a man named Karral Shah who had migrated to present-day Abbottabad district from the present-day border of southern Pakistan with Afghanistan. [1] [2]

This warrior tribe trace their descent from Sardar Kallar Shah son of Sujann Shah who was believed to have come from southern Afghanistan, and was a descendant of Alexander the Great. In Haripur and Abbottabad, they are known as Sardars, a name they acquired during the time of the Delhi Sultanate (1206–1296), when the tribal members were made rulers of the Galliyat region of Hazara.

It does seem that throughout the middles ages, the Karlal maintained their independence. During Mughal era (1550-1730), when the Gakkars were trying to extend their authority in the entire lower Hazara from their base in Khanpur, now Haripur District, the leader of Karlal tribe Morcha Kulli Khan at that time was able to murder the Ghakkar chief and retained his tribes independence. Similarly the Turks, whose territory lay to the north, were also never able to extend their authority over this tribe although enjoying sovereignty over large portion of Pakhal Sarkar (an old name of Hazara). In the Durrani period (1740-1800), no attempt was made by Afghan rulers to subdue their territory. However, when the Sikhs captured the lower Hazara region, they tried to gain control over entire lower Hazara including Karlal territory.

In 1822, Ranjit Singh sent a large force under the command of famous General Amar Singh Majitta, who was defeated by Karlals with great slaughter. Amar Singh Majitta was also murdered by the Karlal Chief Sardar Hassan Ali Khan during war that was fought at a historic place of Galliyat named Sumandar Khata. Lepel Griffin, author of a colonial history of Hazara, writes in his book about this battle of Sumandar Khata. From 1822 to 1845 Karlal tribe fought many battles with Sikhs and were able to retain their independence. In 1844 once again Lahore Darbar sent a large force under Diwan Mulraj and Hari Singh to subdue Karlal tribe. Taking advantage of the difficult geographical terrain of their land, the Karlals were able to defeat Sikh army at a place called Nah and killed more than 150 Sikh soldiers.

During the British period at the time of mutiny in 1857, the Karlal tried to revolt against the rule of East India Company, however, British were able to imprison Karlal chief Sardar Hassan Ali Khan and many mutineers of this tribe were hanged along with some Dhund tribesmen (Mutiny Reports 1857 of Hazara District).

In 1946, Sardar Muhammad Zain Khan was elected as a member of All India Muslim League and voted for the creation of Pakistan.

In 1957, Mohammad Abdul Ghafoor Hazarvi, a Karlal, became the first recipient of the highest civilian award of Pakistan, the Nishan-e-Imtiaz. [3] . This warrior tribe enjoyed cordial relations with other famous tribes of Hazara including Tareens, Jadoons, Abbasi etc.

The grandfather of PresidentAyub Khan named, Khan Khudadad Khan lived as playmates and comrade-in-arms with Chief of Karlal, Sardar Wali Muhammad Khan and faced together the hazards of a warrior's life. In 1960, Sardar Wali Muhammad Khan was received by President Ayub Khan in president house Rawalpindi which not only pleased the president of Pakistan but also kept alive the great marshal traditions of the time.

In 1988, Sardar Haji Gul Khitab Khan, son of Sardar Wali Muhammad Khan, was elected as the member of National Assembly of Pakistan. He also represented Pakistan in United Nations General Assembly in 1989, where he moved a resolution namely Palestine Resolution. He had the honor to start his speech with the name of Allah Almighty and got the resolution approved in the august house by a majority of 132 free minded nations voted in favor out of a total of 134 votes caste, in spite of the fact that USA and Israel opposed the resolution and voted against. [4]

More recently, the Karlals, along with some other tribesmen of Hazara, have engaged in a political struggle to separate the Hazara Division from Khyber-Pakhtunkhwa in order to form a Hazara Province. Sardar Baba Haider Zaman, the founder of movement of Hazara province, is one of the well known pioneers of this movement [5] [6] . The Ex-Provincial Ministers Sardar Gul Zaman, Sardar Ghulam Nabi and the then Chief Election Commissioner Justice (R) Sardar Raza Ahmed Khan also hail from Karlal Tribe.

Most Karlals today are still living in their ancestral villages in the Galiyat and the Nara tract of the Abbottabad District. 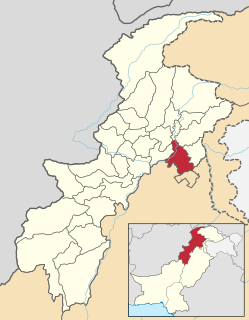 Haripur District is a district in Hazara Division of Khyber Pakhtunkhwa province in Pakistan. Before becoming a district in 1991, Haripur had the status of a tehsil in Abbottabad District. Its headquarters is the city of Haripur.

Haripur is the main city of the Haripur District in Hazara, Khyber Pukhtunkhwa in Pakistan, with Swabi and Buner to the west,some65 km (40 mi) north of Islamabad and 35 km Khanpur Road Tofkian Valley Taxila and 35 km (22 mi) south of Abbottabad. It is in a hilly plain area at an altitude of 520 m (1,706 ft).

Amb also known as Fuedal Tanawal was a princely state of the former British Indian Empire ruled over by chiefs of the Tanoli tribe of Pashtun descent. The Tanoli submitted to British colonial rule in the 1840s. Following Pakistani independence in 1947, and for some months afterwards,The nawabs of Amb remained unaligned. At the end of December 1947 the nawab of Amb state acceded to Pakistan, while retaining internal self-government. Amb continued as a Princely state of Pakistan until 1969, when it was incorporated into the North West Frontier Province now (Khyber-Pakhtunkhwa).

Mansehra is a city in northern Pakistan. One of the largest cities of the Khyber Pakhtunkhwa province, it is the capital of Mansehra District.

Pakhli Sultanate was an ancient sarkar (district) of the Mughal Subah of Punjab, now part of Hazara, Pakistan. It roughly corresponds to the ancient Urasa, the Aρσa or Οΰaρσa which Ptolemy placed between the Bidaspes (Jhelum) and the Indus. It was part of the Gandhara or Gandharva country of antiquity). It later became part of Chandragupta Maurya's Empire. The archaeological remains found here suggest that this was a place of great Buddhist learning. In the Rajatarangini this place now appeared as a separate kingdom and then again as tributary to the Kashmir valley. The Ain-i-Akbari refers to this entire region as Sarkar Pakhli, which formed a part of the larger Kashmir province, which in turn was part of Subah Kabul. The area of Pakhli today forms a part of the Mansehra of Khyber-Pakhtunkhwa province of Pakistan.

The Murree Rebellion of 1857, sometimes termed a war of Independence, was part of the Indian Rebellion of 1857. It was a rebel skirmish between the tribes surrounding the Hill Station of Murree and the colonial government of British India. Resentment toward colonial rule had been mounting for many years following the British establishment in the subcontinent. There had been occasional isolated uprisings toward the British. The significance of the 1857 events was that, although not centrally coordinated, the uprisings had the feel of something much larger with real anticipation that colonial rule would be overthrown.

Sherwan is a Tehsil of Abbottabad District in Khyber-Pakhtunkhwa province of Pakistan, located 35 km west of Abbottabad. Sherwan.—A village, or rather a couple of villages almost adjoining each other,' and known, the northern as Sherwan Kalan, and the southern as Sherwan Khurd, on a ridge some 5,000 feet high in the centre of Lower Tanawal Sherwan is located in a beautiful valley which is surrounded by large, forested mountains on three sides. These forests host a number of wild animals, such as jackals, wolves, pigs, porcupines, fox and occasionally leopards. Sherwan is divided into two parts Sherwan Khurd (small) and Sherwan Kalan (wide). Sherwan Kalan covers a much larger area than Sherwan Khurd. In the North-East of Sherwan Union Council there is another village called Patheel. On the south of the valley there is a stream called Mangal, home to a number of fish such as Trout, eels and soles etc.

Hindkowans are an Indo-Aryan linguistic-cultural group, which is native to the Khyber-Pakhtunkhwa, Pothohar Plateau and Azad Kashmir regions of Pakistan. Hindkowans speak various Hindko dialects of the Punjabi language, in contrast to Pashto. 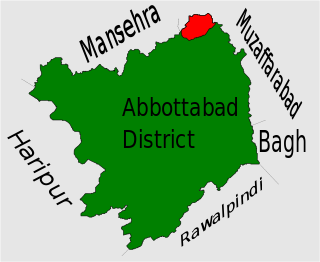 Dalola is one of the 51 union councils (sub-divisions) of Abbottabad District in Khyber-Pakhtunkhwa province of Pakistan.

Baba Haider Zaman was a political personality of Hazara, KP, Pakistan. He got was known for Hazara province movement, a protest campaign against changing the name of Sarhad Province. In 2010, the whole political leadership of Hazara Division was united under his guidance and a demand of separate Hazara Province was strengthened by a division-wide prostest. He was previously a Provincial Minister and District Nazim of Abbottabad.

Bostan Khan ,was a warrior of the Tareen tribe settled in the Haripur, Hazara region of what was to later become the North-West Frontier Province, who was executed for rebellion by the Sikh administrators of the region at that time.

Dhund is a tribe found in the Abbottabad and Rawalpindi District, as well as Mansehra, Haripur, Bagh, and Muzaffarabad districts of Khyber Pakhtunkhwa and Azad Kashmir in Pakistan. They mainly speak Punjabi or Pahari dialects, as well as Hindko. The word Dhund was an honorary name given to one of their forefathers.

Yousuf Ayub Khan is a Pakistani politician and businessman. He is a grandson of former military dictator and president Ayub Khan..