Karli-Eli (Greek : Κάρλελι, Karleli; Turkish : Karlıeli), also Karli-Ili or Karlo-Ili, [1] was the Ottoman name for the region of Aetolia-Acarnania in western Greece, which formed a distinct administrative unit ( sanjak or liva ) from the late 15th century until the Greek War of Independence.

In the early 15th century, Carlo I Tocco, the Count palatine of Cephalonia and Zakynthos, became the ruler of most of western continental Greece (Aetolia-Acarnania and Epirus). After his death in 1429/30, the Ottomans took over most of Epirus, leaving his nephew Carlo II Tocco to rule over a truncated realm as an Ottoman vassal. When he too died in 1448, his heir Leonardo III Tocco attempted to seek Venetian protection, whereupon the Ottomans began to occupy the remaining mainland territories, seizing Arta in 1449. [1] [2]

The Toccos held out in their southern capital, Angelokastron, until 1460. After the latter's fall, only Vonitsa remained in Tocco hands in the mainland, but pressure eased while the Ottomans were distracted by the Ottoman–Venetian War of 1463–1479. Immediately after its conclusion, an Ottoman fleet under Gedik Ahmed Pasha conquered the remnants of the Tocco principality, although Cephalonia and Zakynthos were lost again in 1481. The last Christian outpost on the mainland, Nafpaktos (Lepanto), a Venetian colony since 1407, was conquered by the Ottomans in 1499. [1] [2]

Organization as a province and history

The former Tocco territories were formed as the administrative unit ( sanjak ) of Karli-Eli between 1475 and 1489, first as part of the Rumelia Eyalet, and later, probably around 1550, under the Eyalet of the Archipelago, a province established in 1533 and subordinated to the chief admiral of the Ottoman navy, the Kapudan Pasha . [1] [2] [3]

The 17th-century geographers Hajji Khalifa and Evliya Çelebi record that the province encompassed six kazas ("districts"): Santa Maura (Lefkada), Vonitsa, Angelokastron (in Turkish Enkili-Kastri), Xiromero (Tr. Eksemere), Valtos (Tr. Alto), and Vrachori (Tr. Imrahor). Hajji Khalifa also adds Preveza, but this is possibly an error, since Evliya does not mention it. [1] [2] [5] In terms of land distribution, in 1534, Karli-Eli is recorded as having six ziamets and 124 timars , while at the time of his writing (1656) Hajji Khalifa mentions eleven ziamets and 119 timars, with the land allotted to the governor (hass) producing a revenue of 264,000 akçes . [2] The seat of the governor or sanjakbey was Angelokastron until the late 17th century, when it was devastated by the Venetians during the Morean War. The capital was then moved to nearby Vrachori, which Evliya describes as a prosperous town of 300 houses during his visit in 1688. [2]

Santa Maura and Vonitsa were conquered by the Venetians in 1684, during the early stages of the Morean War, and were ceded to them in the Treaty of Karlowitz in 1699. [1] [2] At about the same time, Missolonghi and Anatolikon were unofficially detached from the kaza of Angelokastron and became a distinct voevodalik . [2] In addition, the sanjak as a whole now began to be granted as hass to other provincial governors or persons in the imperial court. Consequently, from the early 18th century on, Karli-Eli was governed by a mutesellim rather than a sanjakbey. [2]

From 1788, the ambitious semi-independent Albanian ruler of Ioannina, Ali Pasha, coveted Karli-Eli and tried to gain control over it by intervening in its governance. Finally, in October 1798 he invaded the province, forcing its mutesellim to seek refuge in the citadel of Vonitsa. The Ottoman government reacted by granting the entire sanjak of Karli-Eli (minus the voevodalik of Missolonghi) as a personal hass to Mihrişah Valide Sultan, the mother of Sultan Selim III (r. 1789–1809). From 1799 until 1805, province was administered by Yusuf Agha, a cousin of the Valide Sultan 's treasurer, but in 1806, probably due to the death of Mihrişah the year before, Ali Pasha managed to gain control of Karli-Eli, which he kept until the Ottoman government turned against him in 1820. [2] Soon after, the region took part in the Greek War of Independence, with the town of Missolonghi playing a crucial part in the Greeks' struggle for freedom (cf. Siege of Missolonghi). The entirety of Karli-Eli became part of Greece when it was recognized as an independent kingdom. [1] 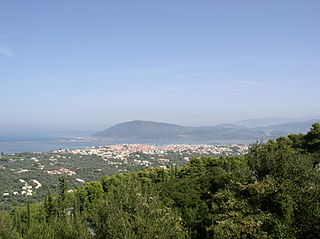 Lefkada, also known as Lefkas or Leukas and Leucadia, is a Greek island in the Ionian Sea on the west coast of Greece, connected to the mainland by a long causeway and floating bridge. The principal town of the island and seat of the municipality is Lefkada. It is situated on the northern part of the island, approximately 25 minutes by automobile away from Aktion National Airport. The island is part of the regional unit of Lefkada. 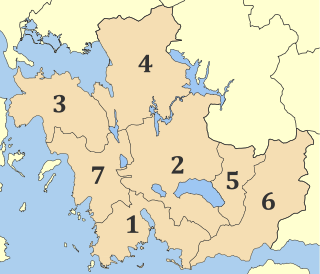 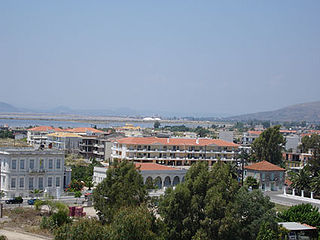 Missolonghi or Messolonghi is a municipality of 34,416 people in western Greece. The town is the capital of Aetolia-Acarnania regional unit, and the seat of the municipality of Iera Polis Messolongiou. Missolonghi is known as the site of a dramatic siege during the Greek War of Independence, and of the death of poet Lord Byron.

Carlo I Tocco was the hereditary Count palatine of Cephalonia and Zakynthos from 1376, and ruled as the Despot of Epirus from 1411 until his death on July 4, 1429.

Carlo II Tocco was the ruler of Epirus from 1429 until his death.

The Morean War, also known as the Sixth Ottoman–Venetian War, was fought between 1684–1699 as part of the wider conflict known as the "Great Turkish War", between the Republic of Venice and the Ottoman Empire. Military operations ranged from Dalmatia to the Aegean Sea, but the war's major campaign was the Venetian conquest of the Morea (Peloponnese) peninsula in southern Greece. On the Venetian side, the war was fought to avenge the loss of Crete in the Cretan War (1645–1669). It happened while the Ottomans were entangled in their northern struggle against the Habsburgs - beginning with the failed Ottoman attempt to conquer Vienna and ending with the Habsburgs gaining Buda and the whole of Hungary - leaving the Ottoman Empire unable to concentrate its forces against the Venetians. As such, the Morean War was the only Ottoman–Venetian conflict from which Venice emerged victorious, gaining significant territory. Venice's expansionist revival would be short-lived, as its gains would be reversed by the Ottomans in 1718.

Yaqub Spata or Shpata was the last Lord of Arta, ruling from 1414/15 until 1416, with a brief interval when he was evicted by the local population. His rule ended after his capture and execution by Carlo I Tocco, who proceeded to incorporate Arta to his domains.

The following outline is provided as an overview of and topical guide to the Ottoman Empire:

Leonardo I Tocco was the Count palatine of the islands of Cephalonia and Zakynthos from 1357 until his death, and later lord of Ithaca, Lefkada, and the port of Vonitsa as well.

The Eyalet of the Morea was a first-level province (eyalet) of the Ottoman Empire, centred on the Peloponnese peninsula in southern Greece.

The Sanjak of Albania was a second-level administrative unit (sanjak) of the Ottoman Empire, located in what is today central and southern Albania. Its territory stretched between Krujë in the north and Kalamas river in the south. It was established in 1415–17, and was disestablished in 1466 with the establishment of the Sanjak of Elbasan. 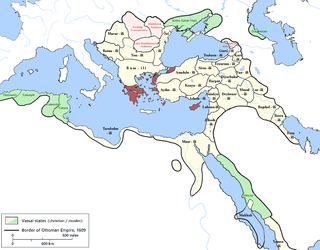 The Sanjak of Eğriboz or Ağriboz was an Ottoman province (sanjak) encompassing eastern Continental Greece. Its name derives from its capital, Eğriboz/Ağriboz, the Turkish form of Euripos, another name of Chalkis. In contemporary English sources it is usually known as Negropont after the Italian name for Chalkis and the island of Euboea, Negroponte.

The Castle of Santa Maura is a fortress on the northeastern tip of the Greek island of Lefkada. The castle began as a small fortification in c. 1300 to control access to the island, before it was expanded to become a walled town and the island's capital by the early 15th century. The Ottoman Empire took possession in 1479, and a century later rebuilt and enlarged it, giving it largely its present shape. A sizeable town grew outside the castle walls by the 1670s.