Katherine Plunket (born as Catherine Plunket; 22 November 1820 –14 October 1932) [1] was an Irish aristocrat from Ballymascanlan, County Louth, a prolific botanical illustrator [2] and the oldest person ever to be born and die in Ireland, at 111 years and 327 days. [3]

Plunket was born at Kilsaran, near Castlebellingham in County Louth, Ireland (then part of the United Kingdom, prior to the Anglo-Irish Treaty in 1921). [1] The eldest of six children, one of whom died in infancy, she was a granddaughter of William Plunket, 1st Baron Plunket, Lord Chancellor of Ireland. Her father Thomas Plunket, 2nd Baron Plunket (1792–1866), [4] was a junior Church of Ireland clergyman when she was born and later became the Bishop of Tuam, Killala and Achonry, she was featured in numerous peerage books of the period including Whittakers. [1]

Her mother Louisa Jane Foster (1804–1893) (married on 26 October 1819, Kilsaren) was the second daughter of Rebecca M'Clure and John William Foster of Fanevalley, County Louth, [4] Member of Parliament for Dunleer, [5] and was related to the Earl of Clermont. Her first and second cousins included three titled members of the Irish aristocracy. She was baptised Anglican in Kilsaran Church on 13 December 1820 as Catherine Plunket, though she spelled her name with a "K" for her entire life. [1]

She inherited from her mother one of the family's ancestral homes, Ballymascanlon House near Dundalk, [3] [6] and oversaw the upkeep of the home and gardens until she contracted bronchitis at the age of 102 (her only serious health problem). [3] The house is now a hotel. [6]

With her younger sister Gertrude (1841–1924), Plunket traveled widely and visited almost every capital in Europe. [4] With her sister, Frederica, she made many sketches of flowers in France, Italy, Spain and Germany, and Ireland. [2]

Although it was not known at the time, Plunket became the oldest recognised person in the world at 8:00 a.m. on 4 December 1928, after the death of Delina Filkins, at the age of 108 years and 12 days, spanning a little over three years. At the time of Plunket's death, she was credited with being the longest-lived Irish person in history, and not only lived longer than anyone who died in Ireland, but also the United Kingdom (as Ireland, at the time, was still part of the UK) and at the age 109 received a telegram from King George V, she held this longevity record title for 38 years, until 1970, when Ada Giddings Roe lived to be 12 days older. She was the last living person who had met the author Sir Walter Scott (1771–1832), when he stayed at her grandfather's house in Bray while she was visiting. [8]

Plunket was included in the first ever Guinness World Records (published in 1955), and is the only supercentenarian listed then to stand the burden of scrutiny in the years since. [9]

Plunket attributed her longevity to the unrustled carefree aspect of her life. She died on 14 October 1932, a month shy of her 112th birthday; her death was recorded three days later in Ravensdale, County Louth and attributed to syncope. Her obituary was published in numerous Irish media publications, and in England in The Times . A telegram of condolence was sent to her relatives by King George V. [1] 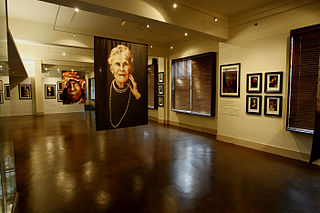 A centenarian is a person who has reached the age of 100 years. Because life expectancies worldwide are below 100 years, the term is invariably associated with longevity. In 2012, the United Nations estimated that there were 316,600 living centenarians worldwide. 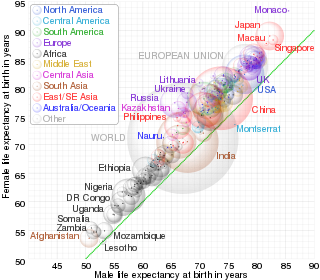 The word "longevity" is sometimes used as a synonym for "life expectancy" in demography. However, the term longevity is sometimes meant to refer only to especially long-lived members of a population, whereas life expectancy is always defined statistically as the average number of years remaining at a given age. For example, a population's life expectancy at birth is the same as the average age at death for all people born in the same year. Longevity is best thought of as a term for general audiences meaning 'typical length of life' and specific statistical definitions should be clarified when necessary.

Jeanne Louise Calment was a French supercentenarian from Arles, and the oldest human whose age was well-documented, with a lifespan of 122 years and 164 days. Her longevity attracted media attention and medical studies of her health and lifestyle. 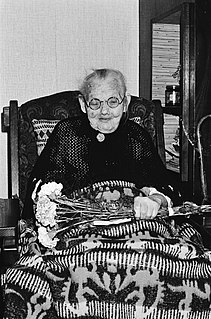 A supercentenarian is someone who has reached the age of 110. This age is achieved by about one in 1,000 centenarians. Anderson et al. concluded that supercentenarians live a life typically free of major age-related diseases until shortly before maximum human lifespan is reached.

Charlotte Marion Hughes, née Milburn was the longest-lived person ever documented in the United Kingdom at 115 years, 228 days.

Longevity claims are unsubstantiated cases of asserted human longevity. Those asserting lifespans of 110 years or more are referred to as supercentenarians. Many have either no official verification or are backed only by partial evidence. Cases where longevity has been fully verified, according to modern standards of longevity research, are reflected in an established list of supercentenarians based on the work of organizations such as the Gerontology Research Group (GRG) or Guinness World Records. This article lists living claims greater than that of the oldest living person whose age has been independently verified, Kane Tanaka at 117 years, 325 days, and deceased claims greater than that of the oldest person ever whose age has been verified, namely Jeanne Calment who died at the age of 122 years, 164 days. The upper limit for both lists is 130 years. 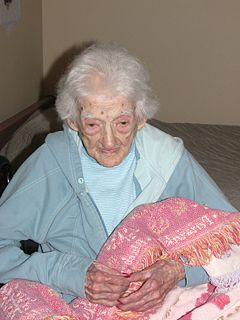 Edna Ruth Parker was an American supercentenarian who, for fifteen months, was recognized as the oldest person in the world. She featured in two documentaries and was included in a Boston University DNA database of supercentenarians.

Jean-Marie Robine is a French demographer, gerontologist, author and journalist, who is best known as being the co-validator of the longevity of Jeanne Calment, the oldest verified supercentenarian of all time, with whom he collaborated. 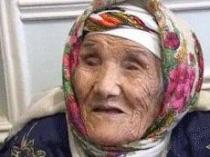 Tuti Tojiboyevna Yusupova was an Uzbekistani longevity claimant. At the alleged age of 134 years, 270 days, she was claimed to be the oldest living person in the world and oldest person ever, her claimed age exceeding that of the currently recognised claimant Jeanne Louise Calment by 12 years. She was born and died in the same village, but lived in four states: the Khanate of Khiva, the Khorezm People's Soviet Republic, the Soviet Union and independent Uzbekistan.

Arthur Roger Thatcher, commonly known as Roger Thatcher or sometimes as A. Roger Thatcher, was a British statistician. Thatcher was born in Birmingham and spent his formative early years in Wilmslow, Cheshire. He attended The Leys School in Cambridge and went on to university at St John's College, Cambridge, where he concentrated his studies in statistics, economics, and mathematics. After brief training in meteorology as part of his national service, he instructed Royal Navy pilots in weather patterns. He married his wife Mary in 1950; they had two children.

Ferdinand Ashmall was an English centenarian and Catholic priest for the Catholic Church in England and Wales.