Its average altitude is 520 meters above sea level. The village is set in hilly terrain with narrow, deep valleys, through which flows the Agios Minas river.

Agios Minas is a former municipality on the island of Chios, North Aegean, Greece. Since the 2011 local government reform it is part of the municipality Chios, of which it is a municipal unit. It is located on the central east coast of the island, just south of Chios (town). Its land area is 13.049 km². Its population was 3,271 at the 2011 census. The seat of the municipality was in Thymiana. Its next largest town is Neochori (587).

Kato Drys is pictured on the Cyprus one pound note.

A significant figure from the village is Saint Neophytos, born in Kato Drys in 1134. The house in which he was born still stands today. Sir Reo Stakis (1913–2001) was also born in the village.

There is a small church dedicated to the saint located on a hill near the village.

Kastro-Kyllini is a former municipality in Elis, West Greece, Greece. Since the 2011 local government reform it is part of the municipality Andravida-Kyllini, of which it is a municipal unit. The municipal unit has an area of 49.322 km2. The population was 3,622 in 2011. The municipality Kastro-Kyllini was created in 1999 as part of the Kapodistrias reform from the formerly independent communities Kyllini, Kato Panagia, Kastro and Neochori, that became municipal districts. After the 2011 Kallikratis reform, these municipal districts became (dependent) communities. Its seat of administration was the small port town of Kyllini. 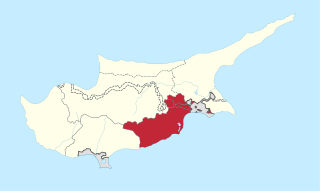 Troulloi is a village in Larnaca District, Cyprus. It is one of only four villages located within the United Nations Buffer Zone, the other three being Pyla, Athienou and Deneia. In 2011 Troulloi had a population of 1,175 people according to the Statistical Service of the Republic of Cyprus, 2014-04-17. The village's patron saint is Saint Mamas, celebrated on 2 September each year.

Lympia or Lymbia is a large village in the Nicosia District of Cyprus. In 2011 the population was 2,694.

Fyti is a village in the Paphos District of Cyprus. It is situated on a plateau 25 km north-east of Paphos and 20 km south-east of Polis. There are several small villages within a 3 km radius of Fyti, including Lasa, Kritou Marottou and Anadiou, all residing at an average altitude of 680 m.

Kato Lefkara is a village in the Larnaca District of Cyprus. Its population in 2011 was 128.

Sia or Sha is a village in the Nicosia District of Cyprus. It is located 4 km south of Alampra.

Spilia is a small village in the Nicosia District of Cyprus, located near Kyperounta. The hamlet of Kourdali is part of it. 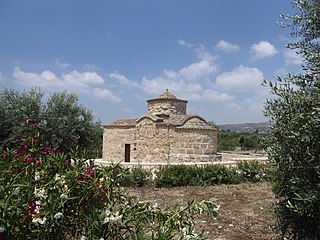 Choirokoitia is a village in the Larnaca District of Cyprus, located 2 km north of Tochni, near the UN World Heritage Site of Choirokoitia.

Lageia is a small village in the Larnaca District of Cyprus, 7 km west of Pano Lefkara. Its population in 2011 was 28.

Odou is a village in the Larnaca District of Cyprus, 8 km northwest of Ora. Its population in 2011 was 213. 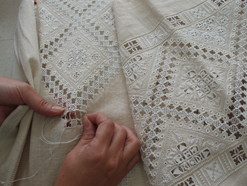 Lefkaritika or Lefkara Lace is a handmade lace from Pano Lefkara Cyprus. Notable characteristics are the hemstitch, satin stitch fillings, needlepoint edgings, white, brown, ecru colours and geometric intricate patterns. in 2009, this traditional craft of lace-making was inscribed on the Representative List of the Intangible Cultural Heritage.

Neophytos of Cyprus, Saint Neophytos, Neophytos the Recluse was a Cypriot Orthodox monk, priest, and sometime hermit, whose writings preserved a history of the early crusades. "He is considered to be one of the most significant figures of the Church of Cyprus"