Katsuya Nomura (野村 克也, Nomura Katsuya, June 29, 1935 – February 11, 2020) was a Japanese Nippon Professional Baseball (NPB) catcher and manager. During his over 26-season playing career mostly spent with the Nankai Hawks (now the Fukuoka Softbank Hawks), he became one of NPB's greatest offensive catchers. He was awarded the Pacific League MVP Award five times, became the first NPB batter to win the Triple Crown in 1965, and holds the record for second-most home runs and RBIs in NPB history.

Nomura was a player-manager for the last eight years he was with the Hawks, leading them to the Pacific League title in 1973. After playing, he became a full-time manager and served led the Yakult Swallows to four league titles and three Japan Series championships from 1990 to 1998. Later, he managed the Hanshin Tigers for three seasons and the Tohoku Rakuten Golden Eagles for four seasons until his retirement in 2009. As a manager, Nomura recorded 1,565 wins, the fifth-most wins of any manager in NPB history. He was elected to the Japanese Baseball Hall of Fame in 1989.

Nomura was born in the coastal fishing village of Amino (now Kyōtango) in Kyoto Prefecture. When he was three years old, his father died of disease while serving in China during the Second Sino-Japanese War. Nomura grew up in poverty with his mother and older brother. With the help of his brother, he was able to attend high school. [1]

After graduating from Mineyama High School, Nomura joined the Nankai Hawks after a tryout in 1954. [2] The team's manager at the time believed he'd at least be useful as a catcher for pitching practice. That year, Nomura played in nine games and went hitless for the season. The Hawks discussed cutting him from the team, however, he was given another chance reportedly after Nomura offered to play for free and even threatened to throw himself in front of a train if he was let go. [1]

During a career that spanned four decades from 1954 to 1980, Nomura hit 657 home runs and led the Pacific League in homers eight straight seasons. (However, it should be taken into consideration that his home park, Osaka Stadium, measured only 276 feet down the lines until 1972, and 300 feet from 1972 onward, and 380 feet to straightaway center—tiny dimensions by Major League Baseball standards.) [3] He finished his career with 2901 hits. [4]

Nomura began his 24-year managerial career as player-manager of the Hawks in 1970. During his eight year stint as Hawks manager, he led the team to the Pacific League title in 1973. After his playing career, Nomura went on to become a full-time manager. From 1990 to 1998, he managed the Yakult Swallows, leading them to four league titles and three Japan Series championships. [8] While managing the Swallows, Nomura mentored the team's catcher, Atsuya Furuta. Under Nomura, Furuta flourished and became a hall of fame catcher in his own right. [9]

Following his role as Yakult manager, Nomura joined the Hanshin Tigers and managed the team from 1999 to 2001. The team finished last in the Central League all three seasons. [10] On December 5, 2001, his wife, television personality Sachiyo Nomura, was arrested for tax evasion. Nomura resigned from his managerial position the next day. [11] His wife was accused of hiding ¥45 million of his income, however Nomura was not accused of any criminal responsibility. [12]

After the scandal, Nomura managed the amateur corporate league team Shidax from 2003 to 2005. He left after three seasons to return to NPB. The Tohoku Rakuten Golden Eagles had a poor showing during their inaugural 2005 season. It was the first PL club in 40 years to lose at least 90 games in one season. They finished with a 38-97-1 record. Hoping to improve for their second season, the team hired Nomura to manage the club because of his experience. [10] Over the next four season, he helped turn Rakuten around. By his final season with the team, the Eagles finished the regular season in with their best-ever showing up to that point in time, second place, securing them a position in the Climax Series. After losing in the final stage of the 2009 Pacific League Climax Series, Nomura retired from managing at the age of 74. As a manager, Nomura recorded 1,565 wins, the fifth-most wins of any manager in NPB history. [8]

During his playing time, Pacific League games were rarely televised. Because of this, Nomura was often overshadowed by his Central League contemporaries such as superstars Sadaharu Oh and Shigeo Nagashima of the Yomiuri Giants. [1] He openly resented this and felt he never received the attention that he deserved as a player. [13] Over 26-season playing career, however, Nomura amassed a number of awards, titles and records. During his time with the Hawks, he won five Pacific League MVP Awards – the most of any PL player and second-most all-time. [14] Nomura also led the PL in home runs for nine seasons, eight of which were consecutive and won 19 Best Nine Awards for best catcher in the league. He accumulated 657 home runs, 1,988 RBIs and 2,901 hits in 3,017 games, all of which are 2nd in the all-time rankings. [8] He was elected into the Japanese Baseball Hall of Fame by the Selection Committee for Players in 1989. [15]

While married to his first wife Masako, Nomura began a relationship with Sachiyo in 1972. Shortly after, Sachiyo became pregnant and gave birth to future NPB player Katsunori Nomura in 1973. After this, Masako had a nervous breakdown and attempted suicide, and later died of cancer. [16] Sachiyo and Katsuya married in 1978. The two remained married until her death in 2017 at age 85. [17] Sports agents Kenny and Don Nomura, Sachiyo's children from her previous marriage, are Katsuya's step-children. [16] Katsuya died of heart failure on February 11, 2020, at age 84. [8]

The Fukuoka SoftBank Hawks are a Japanese baseball team based in Fukuoka, Fukuoka Prefecture. The team was bought on January 28, 2005 by the SoftBank Corporation.

The Tohoku Rakuten Golden Eagles, often shortened as the Rakuten Eagles, are a baseball team based in Sendai, in Miyagi Prefecture, Japan. It has played in Nippon Professional Baseball's Pacific League since the team's formation in 2005. The team is owned by the Internet shopping company Rakuten.

Atsuya Furuta is a Japanese former baseball player and player-manager for the Tokyo Yakult Swallows professional baseball club in the Nippon Professional Baseball's Central League. Drafted in the 2nd round in 1990, Furuta became a leader for the Swallows as a catcher and became the first player-manager in Japanese baseball in 29 years, since Katsuya Nomura in 1977. In addition to his skills on the field, he is also known for leading a successful two-day strike in 2004 as the head of the Japanese baseball players union.

Katsunori Nomura is currently a Nippon Professional Baseball (NPB) coach for the Tohoku Rakuten Golden Eagles. Before coaching, he played in NPB from 1996 to 2006, primarily as a second or third-string catcher. Nomura was drafted in 1995 by the Yakult Swallows, the team managed by his father, catching-great and long-time manager Katsuya Nomura. Over the course of his playing career, his father managed him for five seasons with three different teams—two with the Swallows, two with the Hanshin Tigers and one with the Golden Eagles.

The 1997 Japan Series was the Nippon Professional Baseball (NPB) championship series for the 1997 season. It was the 48th Japan Series and featured the Pacific League champions, the Seibu Lions, against the Central League champions, the Yakult Swallows. The series is the third time the two teams played each other for the championship, the last two contests being in 1992 and 1993. Played at Seibu Dome and Meiji Jingu Stadium, the Swallows defeated the Lions four games to one in the best-of-seven series to win the franchise's 4th Japan Series title. The Swallows' star catcher Atsuya Furuta was named Most Valuable Player of the series. The series was played between October 18 and October 23, 1997, with home field advantage going to the Pacific League.

American expatriate baseball players in Japan have been a feature of the Japanese professional leagues since 1934. American expatriate players began to steadily find spots on Nippon Professional Baseball (NPB) rosters in the 1960s. More than 600 Americans have played NPB, although very few last more than a single season in Japan.

Akira Niho is a professional Japanese baseball player. He plays pitcher for the Fukuoka SoftBank Hawks.

The 2004 Nippon Professional Baseball realignment was a series of events that occurred during the 2004 Nippon Professional Baseball season that changed the landscape of Nippon Professional Baseball (NPB). In June of that season, the Osaka Kintetsu Buffaloes and the Orix BlueWave announced that, due to financial difficulties, the two teams planned to merge into one for the start of the 2005 season. Both teams were in the Pacific League (PL), and a merger between the two would result in a team imbalance with the NPB's opposing league, the Central League (CL). Soon, it was announced that a second merger was being explored between two of the remaining four PL teams. With the possibility of the PL losing a second team, discussion about possibly restructuring NPB's two-league system into one ten-team league began. PL and CL executives continued to discuss the merits of both systems until it was finally decided that the two-league system would remain intact and interleague play would be introduced in the 2005 season.

Liván Moinelo Pita is a Cuban professional baseball pitcher for Vegueros de Pinar del Rio in the Cuban National Series. He was dispatched to the Fukuoka SoftBank Hawks in 2017. 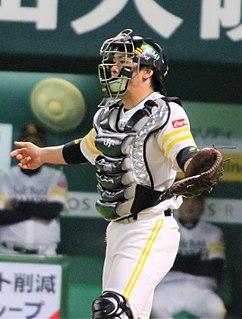 Kōta Ishibashi is a professional Japanese baseball player. He plays catcher for the Chunichi Dragons. 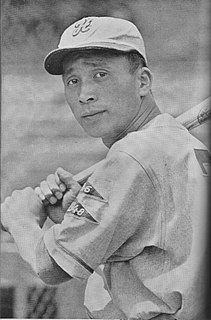