Koichi Kawai, the company founder, was born in Hamamatsu, Japan in 1886. His neighbor, Torakusu Yamaha, a watchmaker and reed organ builder, took him in as an apprentice. Kawai became a member of the research and development team that introduced pianos to Japan. [1] Yamaha died in 1916, and in the 1920s the piano industry faltered in Japan. New management took over control of Yamaha's company, Nippon Gakki Co. (later renamed the Yamaha Corporation), and began to diversify its production line. This led Kawai to leave Nippon Gakki in 1927 and found the Kawai Musical Instrument Research Laboratory. [1]

After Koichi Kawai's death in 1955, his son, Shigeru Kawai became company president at 33 and expanded production facilities. In 1980, he opened the Ryuyo Grand Piano Factory. Shigeru Kawai was president of the Kawai company from 1955 to 1989, chairman from 1990 until 2002, and a company consultant until his death in 2006 at 84.

Shigeru Kawai's son, Hirotaka Kawai, was appointed president in 1989. He integrated advanced robotics into the manufacturing process, established Kawai manufacturing facilities around the globe, and oversaw the introduction of several new series of grand, upright and digital pianos.

Since the 1970s, Kawai has pioneered the use of alternative materials to improve the consistency and stability of piano performance. In 1971, the company began to use acrylonitrile butadiene styrene (ABS), a composite material, for parts of its piano actions to overcome the problems associated with the use of wood. Kawai design engineers reasoned that the tendency of wood to shrink and swell significantly with changes in humidity made it less than ideal for use in a piano action, where exacting tolerances must be maintained to ensure stable piano touch. So they gradually replaced selected wooden action parts with ABS parts that they believed would remain more stable, particularly over time as their pianos age.

According to Kawai, [3] scientific tests[ which? ] conducted by Professor Abdul Sadat at California Polytechnic University in 1998 found that Kawai's ABS action parts to be stronger than comparable wooden parts and far less susceptible to shrinking and swelling due to humidity. Kawai advertises [4] that its use of composite parts makes its piano actions more stable and consistent than those made by other manufacturers.

In 2002, Kawai introduced its Millennium III grand piano action with ABS-Carbon, [5] a new composite material that combined ABS with carbon fiber. The new material (dubbed ABS-Carbon) increased the strength of Kawai action parts, reducing their weight, which made the overall action operate faster (very important for control when playing repeated notes or trills). The addition of carbon fiber also increased the stiffness of ABS-Carbon action parts, allowing the action to produce more power for the player with less effort. Kawai contends that these advances in materials and design help its Millennium III action respond more accurately to the player's intentions with greater consistency over time.

Kawai grand pianos have evolved steadily over the decades from the Model 500/600 built in the 1960s and 1970s, to the KG Series in the 1980s and early 1990s that became popular among teachers and institutions. During these years, Kawai grand pianos earned a reputation for long-term, stable performance even in heavy use. In 1996, Kawai introduced the RX Series grand pianos featuring the Ultra-Responsive ABS Action. The RX Series continued to evolve with the introduction of the Millennium III Action with ABS-Carbon in 2004. In 2009, the RX BLAK Series debuted with a new Acoustic Resonant Solid Spruce soundboard and the addition of Phenolic Stabilizers on the hammers that further enhanced the precision of the hammer strike for improved tone and consistency. The RX BLAK Series pianos also incorporated many cosmetic changes.

In 1999, Kawai introduced the Shigeru Kawai grand piano series. [6] These pianos are handmade by highly skilled technicians in a separate facility of Ryuyo Grand Piano Factory in Hamamatsu. [7] Shigeru Kawai pianos are recognized as one of the best pianos in the world [8] [9] and are used in concerts and piano competitions all over the world alongside pianos manufactured by companies like Bösendorfer, Steinway, Yamaha and Fazioli. [10] [11] The Shigeru Kawai SK-EX full concert grand piano was introduced in 2001, and chosen as the official piano of the 2002 Tchaikovsky International Piano Competition. [12]

Kawai started manufacturing synthesizers at the start of the 1980s under the brand name Teisco. These instruments were all analog and included the models: 60F, 110F, 100F, 100P, SX-210, SX-240, and SX-400. At some point, Kawai stopped using the "Teisco" brand and so some of these products can be found labelled either Teisco or Kawai.

During the second half of the '80s, Kawai developed and released a number of digital synthesizers. The most known of these are the K series: Kawai K1, K1m, [22] K1mkII, K3 [23] (SSM2044-based filters), K4 and K5. [24] These machines follow different synthesis approaches. The K4 use subtractive synthesis based on sampled waveforms, the K1 and K5 are additive synthesizers. The K1 is one of the first popular synthesizers that has no filter whatsoever; all sounds are made by stacking wave samples and applying frequency modulation. The K3 is hybrid in the sense that it does employ additive synthesis for waveform generation, but these waveforms are static and cannot be modulated as in a true additive synthesizer; instead, waveshaping is done using a low-pass filter, therefore characterizing this machine as a subtractive synthesizer. Uniquely for their price range, all instruments feature aftertouch. Kawai also manufactured rack versions of most of these instruments, Kawai Q-80 MIDI sequencer (1988), [25] [26] and an external MIDI programming device, MM-16 MIDI Mixer (MIDI processor with slider controllers). [27]

In 1996 Kawai released the K5000, an advanced additive synthesizer that greatly improved on the K5 and is now regarded as one of Kawai's very best instruments. [32] It was manufactured in three versions: K5000S, which had 16 knobs for real-time control and an arpeggiator, K5000W which added a sequencer but lacked both the knobs and the arpeggiator, and the K5000R, a rack version with an arpeggiator, but no sequencer and no knobs. A Knobs Macro Box was sold separately for use with the W and R models. Kawai originally planned to release K5000X, which would combine the features of the S and W models with a 76-key keyboard and enhanced memory, but this was cancelled in the late '90s due to bad sales. Shortly thereafter the company stopped producing synthesizers.

The company has built guitars and basses in the past. The F-series from approximately late 1970 to 1990 have a neck thru guitar design. [38]

Roland Corporation is a Japanese manufacturer of electronic musical instruments, electronic equipment and software. It was founded by Ikutaro Kakehashi in Osaka on April 18, 1972. In 2005, Roland's headquarters relocated to Hamamatsu in Shizuoka Prefecture. It has factories in Malaysia, Taiwan, Japan, and the USA. As of March 31, 2010, it employed 2,699 people. In 2014, Roland was subject to a management buyout by Roland's CEO Junichi Miki, supported by Taiyo Pacific Partners. 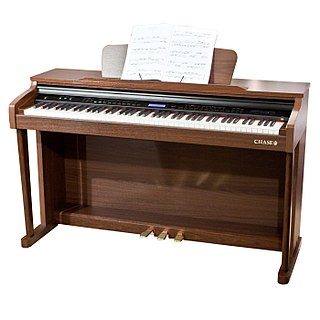 Steinberg Media Technologies GmbH is a German musical software and hardware company based in Hamburg with satellite offices in Siegburg and London. It develops music writing, recording, arranging, and editing software, most notably Cubase, Nuendo, and Dorico. It also designs audio recording, MIDI hardware interfaces, controllers, and iOS/Android music apps including Cubasis. Steinberg created several industry standard music technologies including the Virtual Studio Technology (VST) format for plug-ins and the ASIO protocol. Steinberg has been a wholly owned subsidiary of Yamaha since 2005.

The Korg M1 is a synthesizer and music workstation manufactured by Korg from 1988 to 1995. It is the bestselling synthesizer in history, selling an estimated 250,000 units.

Emagic was a music software and hardware company based in Rellingen, Germany and a satellite office in Grass Valley, California. On July 1, 2002 Emagic was bought by Apple Computer. Emagic's Windows-based product offerings were discontinued on September 30, 2002. 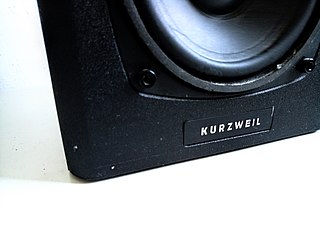 Kurzweil Music Systems is an American company that produces electronic musical instruments. It was founded in 1982 by Stevie Wonder (musician), Ray Kurzweil (innovator) and Bruce Cichowlas.

A stage piano is an electronic musical instrument designed for use in live performance on a stage or a studio, as well as for music recording in jazz and popular music. While stage pianos share some of the same features as digital pianos designed for home use and synthesizers, they have a number of features which set them apart. Stage pianos usually provide a smaller number of sounds, with these sounds being of higher quality, unlike regular digital pianos and home synthesizers.

Teisco was a Japanese musical instrument manufacturing company from 1948 until 1967, when the brand "Teisco" was acquired by Kawai. The company produced guitars as well as synthesizers, microphones, guitar amplifiers and even drum kits. Teisco products were widely exported to the United States and the United Kingdom.

The electric grand piano is a stringed musical instrument played using a keyboard, in which the vibration of strings struck by hammers is converted by pickups into electrical signals, analogous to the electric guitar's electrification of the traditional guitar.

Cheetah Marketing was a United Kingdom-based company that produced electronic music-related hardware products and software for home computer systems during the 1980s. They later changed their name to Cheetah International Ltd.

The Yamaha SY85 is a digital music workstation introduced in 1992. Unlike other Yamaha synthesizers of the time the SY85 does not use FM synthesis. Instead, its sounds are based on samples, which can be layered and modified to create new sounds.

The Ensoniq VFX Synth was initially released as a performance type synthesizer in 1989. It was soon followed by the release of the VFX-SD, which included some updated waveforms, a 24-track sequencer and a floppy drive. Both models were equipped with the Ensoniq Signal Processing (ESP) chip for 24-bit effects. The VFX-SD also included two AUX outs, which allowed for a total of 4 outputs from the synth for more routing flexibility. The initial models were 21-voice polyphony, and in latter models of the VFX-SD (I/II) and the SD-1, the polyphony was 32.

The Ensoniq SQ-80 is a digital/analog synthesizer manufactured from 1987 to 1989. It was Ensoniq's update to its first synth, the Ensoniq ESQ-1. 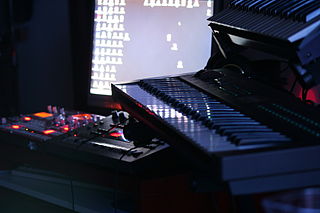 The Yamaha DX21 is a digital controlled bi-timbral programmable analog synthesizer with a four operator synth voice generator which was released in 1985. It uses sine wave-based Frequency Modulation (FM) synthesis. It has two FM tone generators and a 32-voice random-access memory (RAM), 32 user voices and 128 read-only memory (ROM) factory preset sounds. As a programmable synth, it enables users to create their own unique synthesized tones and sound effects by using the algorithms and oscillators. The instrument weighs 8 kg (17.6 lbs). On its release, it sold for $795.