In 1985 Kawasaki launched, worldwide, the Vulcan VN700A, its first cruiser powered by its first V-twin engine. The VN700A has a shaft drive. Kawasaki also made the now rare VZ 750 variant with chromed wheel arches and other subtle differences. To avoid United States tariffs on Japanese motorcycles over 700cc, the initial US model was limited to 699 cc but in 1986, the tariff was lifted so the engine capacity was increased to 749 cc. Apart from paint schemes the Vulcan remained largely unchanged throughout its 22-year production run with only minor adjustments to components.

Kawasaki introduced the Vulcan 400 in 1986 as an entry level cruiser. For a first series, the Vulcan 400 featured a 398 cc liquid-cooled twin engine, and was fitted with a belt drive and six-speed transmission. The series 2 Vulcan 400 featured a 399 cc liquid-cooled V-twin engine similar in design to the 750. The series 2 was fitted with a chain drive and five-speed transmission to reduce cost and was produced in both Classic and Drifter variations.

The Vulcan 500 (EN500A) introduced in 1990 was the successor to the Kawasaki 454 LTD. The EN500A was fitted with a parallel twin 498 cc engine nearly identical to the Kawasaki Ninja 500R. It had a 6 speed transmission and belt final drive. The EN500A was discontinued after 1996 and replaced with the Vulcan 500 LTD (EN500C). Both versions were available as 1996 models. With the EN500C the ergonomics changed as well as the engine tuning. New cam shaft profiles and slightly lower compression pistons moved the power band down to increase low end torque. Also the carburetors were downsized from 34mm to 32mm. The belt final drive was replaced with a chain. The Vulcan 500 LTD was discontinued after the 2009 model year for a nearly 20 year production run.

The Vulcan 650 S (EN650AF/BF) is designated as a Sport cruiser. Introduced in 2015 with an Ergo-Fit system designed for better custom comfort adjustability for different rider sizes. A choice of three foot peg positions, three seats and two handlebars are available to choose from, at time of purchase. The engine is a 649cc parallel twin derived from the Ninja 650. Retuned, heavier flywheel and redesigned intake give the Vulcan S more low and mid range torque. It has very non traditional cruiser looks with a unique frame and suspension layout.

The Vulcan 1500 Drifter ceased production in 2005. The Vulcan 88, with its 1464  cc liquid-cooled V-twin design was produced from 1987 through 1999. A four-speed transmission was blended with the "large for its time motor" and offered consumers a big-bore metric cruiser that was comfortable and relatively light-weight at just over 600 lbs when "rider ready".

The 1500 Meanstreak was introduced in 2002 and lasted 2 years, before giving way to the 1600 Meanstreak. This performance version of the 1500 had the same basic engine as the 1500FI, but sported several upgrades including new camshafts, larger valves, larger fuel injection throttle bodies, new high compression pistons, and re-designed combustion chamber. It also had a slimmed down narrower gas tank. This meant an increase to 72 hp at 5500rpm and 90 ft-lbs at 3000rpm, while weighing in at a mere 637 lbs dry. [3]

Two models of the Vulcan were discontinued in 2006 with the introduction of the VN900. These were the VN800A introduced in 1995 and the first of Kawasaki's modern cruiser style. The VN800A featured a softail design, bobbed rear fender and a 21-inch front wheel. The second, the VN800B (Classic) was introduced in 1996 and had a retro styling that featured full fenders and 16-inch wheels on both front and rear.

Based and built on the same frame, the Vulcan 2000 base model, Classic, and Classic LT have only subtle differences between the variations. The most apparent is the "bug-eye" chrome nacelle projection headlight that was first introduced on 2004 Vulcan VN2000A base model. This headlight was the only offering from Kawasaki until the introduction of the Vulcan Classic VN2000D in 2006, which employed a more traditional headlight. Also introduced in 2006, the Vulcan Classic LT VN2000F. The Classic LT had an appearance similar to the Classic but added saddlebags, windshield, passenger floorboards and passenger backrest to the offering.

The Honda Magna is a cruiser motorcycle made from 1982 to 1988 and 1994 to 2003 and was the second Honda to use their new V4 engine shared with the VF750S Sabre and a few years later a related engine was fitted to the VF750F 'Intercepter', the later models used a retuned engine from the VFR750F with fins added to the outside of the engine. The engine technology and layout was a descendant of Honda's racing V4 machines, such as the NS750 and NR750. The introduction of this engine on the Magna and the Sabre in 1982, was a milestone in the evolution of motorcycles that would culminate in 1983 with the introduction of the Interceptor V4. The V45's performance is comparable to that of Valkyries and Honda's 1800 cc V-twin cruisers. However, its mix of performance, reliability, and refinement was overshadowed by the more powerful 1,098 cc "V65" Magna in 1983.

The Chrysler 1.8, 2.0, and 2.4 are inline-4 engines designed originally for the Dodge and Plymouth Neon compact car. These engines were loosely based on their predecessors, the Chrysler 2.2 & 2.5 engine, sharing the same 87.5 mm (3.44 in) bore. The engine was developed by Chrysler with input from the Chrysler-Lamborghini team that developed the Chrysler/Lamborghini Formula 1 V12 engine in the early 1990s. 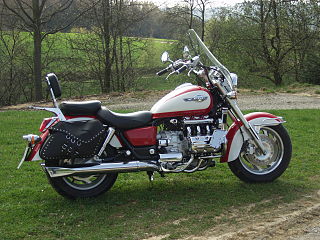 The Honda Valkyrie is a motorcycle that was manufactured by Honda from 1997 to 2003. It was designated GL1500C in the US market and F6C in other markets.

Victory Motorcycles was an American motorcycle manufacturer with its final assembly facility in Spirit Lake, Dickinson County, northwestern Iowa, United States. It began production of its vehicles in 1998, and began winding down operations in January 2017 to be succeeded by the revived traditional American motorcycle brand Indian, which is owned by parent company Polaris Industries. 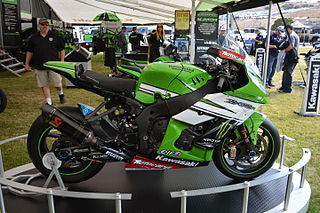 The Honda D series inline-four cylinder engine is used in a variety of compact models, most commonly the Honda Civic, CRX, Logo, Stream, and first-generation Integra. Engine displacement ranges between 1.2 and 1.7 liters. The D Series engine is either SOHC or DOHC, and might include VTEC variable valve lift. Power ranges from 66 PS (49 kW) in the Logo to 130 PS (96 kW) in the Civic Si. D-series production commenced 1984 and ended 2005. D-series engine technology culminated with production of the D15B 3-stage VTEC (D15Z7) which was available in markets outside of the United States. Earlier versions of this engine also used a single port fuel injection system Honda called PGM-CARB, signifying the carburetor was computer controlled.

The Kawasaki VN1500 Vulcan Drifter is a fuel-injected, shaft driven and water cooled, part of the Kawasaki Vulcan line of cruiser motorcycles created in the classic style lines of the 1940s Indian Chief. Kawasaki built this model between 1999 and 2005.

The Kawasaki Vulcan 900 Classic motorcycle is a mid-sized motorcycle cruiser made by Kawasaki, first introduced in 2006. The cycle follows the formula of a smaller yet capable engine fitted into a one-size up frame, a popular combination also in use by Honda, Suzuki, and Yamaha in their respective cruiser lines. 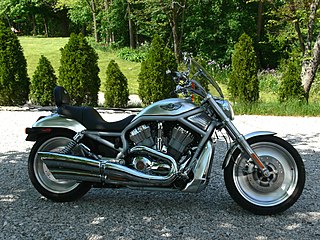 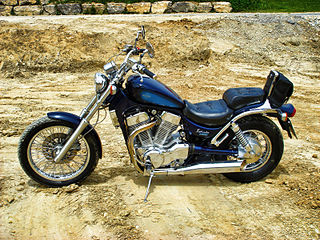 The Suzuki Intruder is a series of cruiser motorcycles made by Suzuki from 1985 to 2005. After 2005, the Intruder lineup was replaced by the Boulevard range. In Europe, the Intruder name remains in use on certain models. The VS Intruder bikes all have 4-stroke V-twin engines.

The Suzuki Boulevard C109R motorcycle was introduced in 2008 as Suzuki's V-Twin Cruiser. The same model is sold in Europe as the Suzuki Intruder C1800R.

In 1996 Yamaha introduced the Royal Star motorcycle. This motorcycle uses the basic power package from the Yamaha Venture Royale.