Nūr-Sūltan is the capital city of Kazakhstan. It was known between 1998 and 2019 as Astana and before that as Akmola. On 23 March 2019, following a unanimous vote in Kazakhstan's parliament, the city was renamed Nur-Sultan, after former Kazakhstani President Nursultan Nazarbayev. 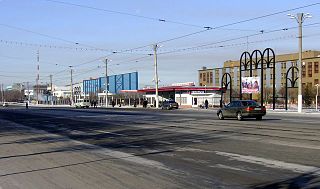 Football in Kazakhstan is governed by the national body the Football Federation of Kazakhstan. The FFK organises the men's, women's and futsal national teams. Football is the most popular sport in the country, followed by ice hockey.

Barys Hockey Club, commonly referred to as Barys Nur-Sultan or simply Barys, is a professional ice hockey team based in Nur-Sultan, Kazakhstan. It is one of the founding members of the Kontinental Hockey League (KHL). They play in the league's Chernyshev Division of the Eastern Conference. Their home arena is the Barys Arena, where they have played since the 2015–16 KHL season. Prior to 2015, the team played home games at the Kazakhstan Sports Palace for 14 seasons, beginning in 2001. The head coach is Andrei Skabelka and the president is Boris Ivanishchev.

Arystan Hockey Club, commonly referred to as Arystan Temirtau, was a professional ice hockey team based in Temirtau, Kazakhstan. They were founded in 2010, and played in the Kazakhstan Hockey Championship until they declared bankruptcy in 2015.

The Kazakhstan Hockey Cup is the national ice hockey cup in Kazakhstan. It was first played in 2002. Kazzinc-Torpedo has won the most cups, with four, Kazakhmys Satpaev/Karagandy has won three, Arlan Kokshetau, Gornyak Rudny and Kulager Petropavl have all won two respectively, Yertis Pavlodar, Arystan Temirtau and Altay Torpedo have both won one apiece.

Hockey Club Saryarka, commonly referred as Saryarka Karagandy, is a professional ice hockey team based in Karagandy, Kazakhstan. They play in the Supreme Hockey League (VHL), the second level of Russian ice hockey, since the 2012–13 season. Before that they competed in the Pro Hokei Ligasy and won its 2009–10 season. In the 2013–14 season, they won Bratina Cup. Saryarka became a farm club of Avangard Omsk in 2015 off-season. Previously it was affiliated with Yugra Khanty-Mansiysk and Barys Astana.

Karagandy-Arena is an ice hockey indoor arena in Karagandy, Kazakhstan. It opened in 2011 and holds approximately 5,500 people. It is primarily used for ice hockey and is the home arena of Saryarka Karagandy hockey club. It is also used for concerts, exhibitions and as a skating rink.

The Kazakhstan Sports Palace is a palace of sports located in Nur-Sultan, Kazakhstan. It serves as the home for Nomad Astana and HC Astana of the Kazakhstan Hockey Championship and Snezhnye Barsy junior hockey team of the Junior Hockey League. The arena seats 4,070 spectators for ice hockey.

Nurlan Sairanuly Orazbayev is a former Kazakh professional ice hockey player, who played for Avtomobilist Karagandy, Bulat Temirtau and Barys Astana. Orazbayev served as a president of the KHL team Barys Astana from 2006 to 2012 and 2013 to 2015.

Bulat Hockey Club, commonly referred as Bulat Temirtau, was a Soviet and Kazakh ice hockey team based in Temirtau, Kazakhstan. They were active from 1960 to 2005.

Hockey Club Temirtau is a Kazakhstani ice hockey team based in Temirtau, Kazakhstan and play in the Kazakhstan Hockey Championship, the top level of ice hockey in Kazakhstan. They serve as the minor league affiliate of Saryarka Karagandy, who plays in the Russian-based Supreme Hockey League. Founded in 2012 as Saryarka–2, they became Berkut in 2013 and Temirtau in 2015.