Kazimierz Żygulski (1919 – 23 February 2012) was a Polish sociologist, political activist and Minister of Culture. [1]

In 1937, he graduated from high school humanities in Lviv, and then he studied at the Faculty of Law of the University of Jan Kazimierz, where he graduated during the first Soviet occupation of Lviv in 1941. He belonged to the youth organizations of the Democratic Club and the Democratic Party.

During the German occupation of Lviv was a member of the Government Delegation for Poland, as well as a judge of the Special Court. In 1944, he was arrested by the NKVD and sentenced for his participation in the work of the Delegation for 15 years in a labour camp. He was sent to a camp in the Komi Republic in the north of the USSR where he lived for ten years, until 1955.

From 1982-1986 he was minister of culture and art, and in the period 1987-1989 chairman of the Polish Committee for UNESCO and a member of the Executive Board of UNESCO in Paris. In 1983, he was elected to the Presidium of the National Council of the Society of Polish-Soviet Friendship. In August 1984 he joined the Civic Committee of the Celebrations of the 40th anniversary of the Warsaw Uprising. From 1986-1989 he was a member of the National Committee of Grunwald .

He was president and professor School of Social and Economics in Warsaw from 1996 until his death.

He wrote a number of papers on the theory and the sociology of culture including:

In September 2009, Edusat TV started broadcasting a 10-part documentary series entitled "Balance Generations", about the life of Kazimierz Żygulski, to celebrate his 90 years of life. This series is based on an interview with Kazimierz Żygulski, referring to the dramatic moments of his life.

Kazimierz Władysław Bartel was a Polish mathematician, freemason, scholar, diplomat and politician who served as 15th, 17th and 19th Prime Minister of Poland three times between 1926 and 1930 and the Senator of Poland from 1937 until the outbreak of World War II.

Lviv Polytechnic National University is the largest scientific university in Lviv. Since its foundation in 1816, it has been one of the most important centres of science and technological development in Central Europe. In the interbellum period, the Polytechnic was one of the most important technical colleges in Poland, together with the Warsaw Polytechnic. In 2020, Lviv Polytechnic was ranked globally among top 1000 universities according to The Times Higher Education. As for 2019, there were approximately 35,000 students in the university. 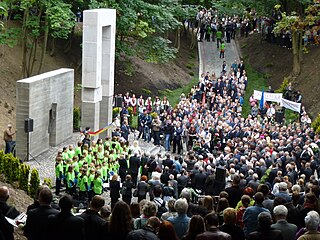 Kazimierz Józef Marian Michałowski was a Polish archaeologist and Egyptologist, art historian, member of the Polish Academy of Sciences, professor ordinarius of the University of Warsaw as well as the founder of the Polish school of Mediterranean archaeology and a precursor of Nubiology.

Tadeusz Kamil Marcjan Żeleński was a Polish stage writer, poet, critic and, above all, the translator of over 100 French literary classics into Polish. He was a pediatrician and gynecologist by profession.

Ryszard Kaczorowski, GCMG was a Polish statesman. From 1989 to 1990, he served as the last President of Poland in exile. He succeeded Kazimierz Sabbat, and resigned his post following Poland's regaining independence from the Soviet sphere of influence and the election of Lech Wałęsa as the first democratically elected President of Poland since before the Second World War.

Radosław Tomasz "Radek" Sikorski is a Polish politician and journalist who is a Member of European Parliament. He was Marshal of the Sejm from 2014 to 2015 and Minister of Foreign Affairs in Donald Tusk's cabinet between 2007 and 2014. He previously served as Deputy Minister of National Defense (1992) in Jan Olszewski's cabinet, Deputy Minister of Foreign Affairs (1998–2001) in Jerzy Buzek's cabinet and Minister of National Defense (2005–2007) in Kazimierz Marcinkiewicz and Jarosław Kaczyński's cabinets. 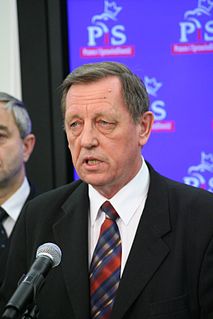 As a result of the Soviet invasion of Poland in 1939, hundreds of thousands of Polish soldiers became prisoners of war in the Soviet Union. Many of them were executed; 22,000 Polish military personnel and civilians perished in the Katyn massacre.

Włodzimierz Brus was an economist and party functionary in communist Poland. He emigrated from Poland in 1972, removed from power after the 1968 Polish political crisis. Brus spent the rest of his life in the United Kingdom.

Eugeniusz Mikołaj Romer was a distinguished Polish geographer, cartographer and geopolitician, whose maps and atlases are still highly valued by experts.

Franciszek Wawrzyniec Kamiński, pseudonym: „Olsza”, „Kowal”, „Zenon Trawiński” was a Polish politician and military leader, commander of the Peasant Battalions during World War II. After war he was a member of the State National Council and the Legislative Sejm. Imprisoned for political reasons during the Stalinist period.

Stanisław Włodzimierz Pyjas (1953–1977) was a Polish student of the Jagiellonian University in Kraków, member of the anticommunist student movements. He died on May 7, 1977 in Kraków. The exact circumstances of Pyjas’ death are still a mystery and his case, which is still disputed, shook public opinion in Poland. According to one scenario he was murdered and the killers, probably members of the communist Secret Services, arranged the death to look like an accident. The official scenario, however, states that his death occurred after he fell from the stairs while being drunk. In 2011 his body was examined, and the outcome states that it was the fall that caused his death and that he had not been beaten.

Karol Kuryluk was a Polish journalist, editor, activist, politician and diplomat. In 2002 he was honored by Yad Vashem for saving Jews in the Holocaust.

Kazimierz Sichulski was a Polish painter, lithographer and caricaturist; associated with the Young Poland movement. His work was part of the painting event in the art competition at the 1928 Summer Olympics. 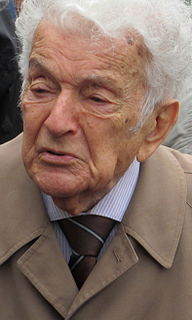 Alfred Schreyer – was a Polish–Ukrainian fiddler and singer, a pupil of Bruno Schulz and survivor of the Holocaust.

Tadeusz Kowalik was a Polish economist, public intellectual and political and social activist. As a prolific publicist in the area of political economy, he is notable for his dissenting leftist views expressed during the Polish systemic transformation.

Kazimierz Romaniuk is a Polish Roman Catholic priest, and professor of biblical studies. In 2004, Romaniuk became the bishop emeritus of the diocese of Warszawa-Praga. He was previously the rector of the Higher Metropolitan Seminary and the Academic Study of Catholic Theology in Warsaw, the auxiliary bishop of Warsaw, and the diocesan bishop of Warsaw-Praga. 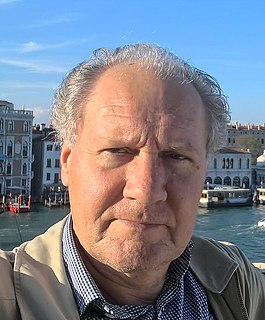 Sławomir Ratajski is a Polish painter and diplomat.