Kazuya Kamenashi (亀梨 和也, Kamenashi Kazuya, born February 23, 1986) is a Japanese singer, actor, host, producer, magazine model and a member of KAT-TUN. Born and raised in Edogawa, Tokyo, he joined the Japanese talent agency, Johnny & Associates, at the age of 12.

He was drafted as a member and co-lead vocalist of the popular J-pop group KAT-TUN in 2001. He is also one half of the temporary group, Shūji to Akira, whose only single "Seishun Amigo" became the best-selling single of 2005 in Japan. Individually, he is a popular actor who has played the lead role in several television dramas.

Born in Edogawa, Tokyo on February 23, 1986, Kamenashi is the third child of his parents. He has two older brothers, Yūichirō and Kōji, and one younger brother, Yūya. He also has two sisters-in-law and a niece from his second brother's marriage and a nephew from his first brother's marriage. His given name comes from a character from the manga, Touch , written by a Japanese manga artist, Mitsuru Adachi. [1] Coincidentally, bandmate Tatsuya Ueda was also named after the twin brother of Kamenashi's namesake. [1]

An avid baseball fan and player like the character he was named after, Kamenashi once represented his country in the junior world league as shortstop though he had to give up the sport professionally due to lack of spare time after he was accepted into Johnny's Entertainment despite having the support of Johnny Kitagawa, the agency's president, to pursue both careers. [2]

In 2009, Kamenashi was cast in a live-action adaptation of a wine-themed manga, Kami no Shizuku , as the leading actor. [3] Voters awarded him, his co-stars (Riisa Naka and Seiichi Tanabe) and the drama a near clean sweep of the winter edition of the Nikkan Sports Drama Grand Prix Awards in March 2009. [4] He made a guest appearance as a doctor on the third episode of TBS drama series, Mr. Brain, opposite his talent agency senior Takuya Kimura. [5] Kamenashi also made his film debut on July 11, 2009, reprising his role of Ryū Odagiri, now a trainee teacher in Gokusen The Movie . [6] The movie earned half a billion yen in its opening weekend landing at the top spot of the box office and stayed in the top ten for six consecutive weeks. [7] It later ranked at number 16 on Japan's 2009 yearly box office results raking in US$33,963,369 at the end of its run. [8]

In 2010, he was cast in the leading role of Kyohei Takano for a live-action adaptation of popular manga, Yamato Nadeshiko Shichi Henge , which aired on NTV. It was named Best Drama by voters of the 13th Nikkan Sports Drama Grand Prix Awards in March 2010 while Kamenashi and his co-star, Aya Omasa, were also awarded Best Actor and Best Supporting Actress respectively. [9]

In 2011, he took on a role as Bem from the adaptation of anime Yōkai Ningen Bem. He received Best Actor award from Nikkan Sports Drama Grand Prix and Television Drama Academy Awards that year. [10] [11] Following the success of the drama, Yōkai Ningen Bem was made into film in 2012. At the end of its run, the film had grossed US$12,628,578 gross. [12]

In 2013, Kamenashi starred in the movie It's Me, It's Me. [13] The movie premiered in 15th Udine Far East Film Festival Italy in April, and Kamenashi won the My Movie Audience Award. [14]

In 2016, Kamenashi was cast in the drama, The Mysterious Thief Yamaneko, which was based on the novel "Kaito Tantei Yamaneko Series" by Manabu Kaminaga as Yamaneko.

In 2017, he appeared in the drama Boku unmei no hito desu alongside his former co-star from Nobuta wo produce, Tomohisa Yamashita. In March 2017 Kamenashi together with Tao Tsuchiya in Live Action Film popular japanese shojo manga PとJK, Also in May 2017 he co-starring Lily Franky as supporting actor, in an independent film A Beautiful Star (美しい).

In 2018, he was back in filming drama series, taking the lead of Final Cut, (Fuji TV), He also appeared in TV Movie Tegami: Keigo Higashino (東野圭吾 手紙) Based on the popular novel Tegami by Keigo Higashino.

Kamenashi walked the runway in 2008 for Hermès' men's autumn/winter 2008 collection in Tokyo. [15] In 2010, Kamenashi won the annual Best Jeanist award with more than 29,000 votes in the men's category, almost triple that of the second runner-up, Masaki Aiba. This is his fifth consecutive win and is thus promoted into the hall of fame, making him Eternal Best Jeanist and ineligible for future runs. [16]

Kamenashi threw the first pitch at the Pacific League opening ceremony for the 2009 baseball season at a match in Chiba City featuring the Chiba Lotte Marines against the Fukuoka SoftBank Hawks on July 19, 2009. [17] [18]

Kamenashi participated in the Central League's Yomiuri Giants 23rd FanFiesta 2009 on November 23, 2009 and led his team to victory. He participated during the 1st inning as shortstop and for the 2nd and 3rd innings as pitcher. He belonged to the Black Rose Variety Team led by SMAP's Nakai Masahiro against the Giants Select Members Team. [19]

In 2012, he was given the opportunity to do live coverage of Major League Baseball between Oakland Athletics and Yomiuri Giants. He also threw the ceremonial pitch against Jemile Weeks. [20]

Kamenashi is a commentator and host on the sports shows Going! Sports&News [21] and Dramatic Game. [22]

Koichi Domoto is a Japanese idol, singer, singer-songwriter, composer, lyricist, television personality, voice actor and actor. Along with Tsuyoshi Domoto, he is a member of the duo KinKi Kids.

Jun Matsumoto, often called by the portmanteau nickname MatsuJun (松潤), is a Japanese singer, actor, radio host, concertmaster, dancer and model. He is a member of the boy band Arashi, and produces Arashi's concerts. He invented the moving stage in 2005 which has been subsequently used by several Asian musical acts. He is best known to Japanese television drama audiences for his portrayal as Dōmyōuji Tsukasa in the Hana Yori Dango series, in which he won GQ Japan's Man of the Year Award under the singer/actor category for his work in the drama.

KAT-TUN is a Japanese boy band formed under Johnny & Associates (Johnny's) in 2001. The group's name was originally an acronym based on the first letter of each member's family name: Kazuya Kamenashi, Jin Akanishi, Junnosuke Taguchi, Koki Tanaka, Tatsuya Ueda, and Yuichi Nakamaru. Their debut on March 22, 2006 was marked by a tripartite release of a CD single, album and music DVD on their exclusive record label J-One Records. Since then, all of their single, album and music DVD releases have debuted at number one on the Oricon music and DVD charts. 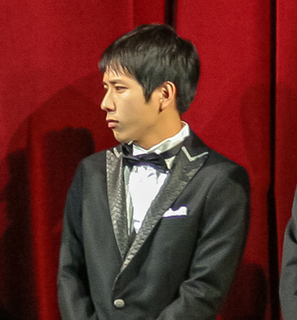 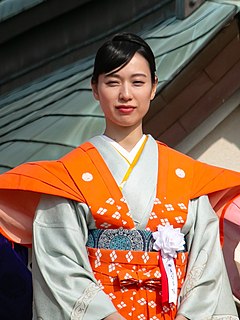 Sho Sakurai is a Japanese singer, songwriter, rapper, actor, news anchor, host and former radio host. He is a member of the boy band Arashi.

A kame is a geomorphological feature.

Jin Akanishi is a Japanese musician, singer, songwriter and actor. He has been active since 1998, first as one of the two lead vocalists of the popular J-pop boy-band KAT-TUN. Since the group's official debut in 2006, they have achieved 14 consecutive number ones on the Oricon charts. In 2009, Akanishi started his solo career, and since then has released two studio albums, and two mini albums.

Taguchi junnosuke in Sagamihara, Kanagawa, Japan), is a singer-songwriter, actor, and model. He is a former member of the Japanese idol group KAT-TUN.

Hiroki Uchi is a Japanese idol singer, songwriter, actor and model. He was born in Habikino, Osaka Prefecture, Japan.

Yuya Tegoshi is a Japanese singer, actor, and tarento. He debuted as a member of Japanese boy band NEWS under Johnny & Associates and was also part of its sub-group, Tegomass.

"Love Yourself " is the eleventh single by Japanese boy band KAT-TUN. It was released on February 10, 2010 by their record label J-One Records. The title track was used as the theme song for the Tokyo Broadcasting System drama, Yamato Nadeshiko Shichi Henge, which stars member Kazuya Kamenashi.

Gokusen: The Movie is a 2009 Japanese film, based on manga series Gokusen. It was directed by Tōya Satō, who also directed live-action film version of Kaiji. This film is the sequel to the television drama Gokusen season 3, and the last of the series. This film has action, comedy and drama just like the TV series. It was released on July 11, 2009.

Kaitō Yamaneko is a Japanese television drama series that premiered on NTV on 16 January 2016. It is based on the mystery novel by Manabu Kaminaga who is known for Psychic Detective Yakumo. In this drama, Kazuya Kamenashi, a member of KAT-TUN, played the lead role, Suzu Hirose and Hiroki Narimiya appeared in supporting roles. The first episode received a viewership rating of 14.3%.

UNLOCK is the 26th single released by the Japanese idol group KAT-TUN. It was released on March 2, 2016 under the label J-One Records/J-Storm.