The story is centered on Kokubu Jiro (Raizo Ichikawa), a prominent member of his university's Kendo dojo. 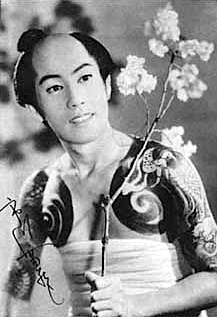 Ichikawa Raizō VIII was a Japanese film and kabuki actor. His birth name was Akio Kamezaki, and his name was legally changed several times, first to Yoshio Takeuchi, and later to Yoshiya Ōta, separate from his performing name.

Momotarō-zamurai (桃太郎侍) or Samurai Momotarō is a Japanese novel by Kiichirō Yamate (1899–1978). Published in 1946, the novel centers on an Edo-period rōnin, Shinjirō, the younger twin brother of a daimyō who was caught in a succession dispute. Shinjirō comes to the aid of his brother in this good versus evil plot in which the title character assumes the name of Momotarō.

Moeyo Ken is a novel by Japanese author Ryōtarō Shiba. It dramatizes the life of Hijikata Toshizō, a member of the Shinsengumi, active in Japan during the bakumatsu.

Enjo is a 1958 Japanese film directed by Kon Ichikawa and adapted from the Yukio Mishima novel The Temple of the Golden Pavilion. Its English title is Conflagration.

Nemuri Kyōshirō is a series of jidaigeki novels written by Renzaburō Shibata. The stories were originally serialized beginning in May 1956 in the Shūkan Shinchō.

Chanbara (チャンバラ), also commonly spelled "chambara", meaning "sword fighting" movies, denotes the Japanese film genre called samurai cinema in English and is roughly equivalent to Western western (genre) and swashbuckler films. Chanbara is a sub-category of jidaigeki, which equates to period drama. Jidaigeki may refer to a story set in a historical period, though not necessarily dealing with a samurai character or depicting swordplay.

Shin Heike Monogatari is a 1955 Japanese film directed by Kenji Mizoguchi. It is based on a prose version by Eiji Yoshikawa of a Japanese epic poem, The Tale of the Heike. It is Mizoguchi's second and last film in color, the other being Princess Yang Kwei Fei (Yōkihi) of the same year.

The Young Swordsman is a 1954 black-and-white Japanese film directed by Kimiyoshi Yasuda.

An Osaka Story is a 1957 black-and-white Japanese film directed by Kōzaburō Yoshimura based on a story by Kenji Mizoguchi.

Gonpachi is a 1956 black-and-white Japanese film directed by Kenji Misumi.

Destiny's Son is a 1962 Japanese chambara film directed by Kenji Misumi starring Raizo Ichikawa and written by Kaneto Shindo, released by Daiei Film. The film is based on one of the novels in the series of Nemuri Kyoshirō, written by Renzaburo Shibata. 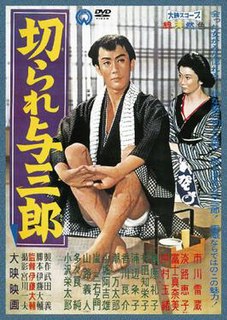 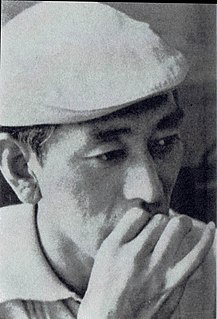 The Last Samurai also known as "Ōkami yo Rakujitsu o Kire" is a 1974 Japanese jidaigeki film, directed by Kenji Misumi. Based on Shōtarō Ikenami's novel "Sonootoko". The film is Kenji Misumi's last film.