Farmer grew up in the North Adelaide area and attended North Adelaide school, where he played Australian rules football on Fridays, and soccer on Saturdays. His early prowess in the round ball code resulted in being selected in the State Schoolboys soccer team.

Farmer left school at 14 and did not play football again until 1927, when he played with North Adelaide Ramblers Seconds and the Marryatville amateur team. In 1928 he was invited to play with the North Adelaide juniors, where he demonstrated some talent at marking and goalkicking, winning the best and fairest award.

In 1929, the 18-year-old Farmer debuted in the North Adelaide League side. Playing at full-forward in his first season, he kicked an impressive 62 goals in only 14 games. In 1930 he became the first SANFL player to kick over 100 goals in a season, and repeated this feat for the next ten seasons.

He played in the winning 1930 Grand Final side despite the great personal distress of his brother Elliot's death weeks earlier from a motorcycle crash that also involved Ken. In 1931 he kicked his 125th goal to break Gordon Coventry's VFL and elite football record of 124 in the Grand Final, which North Adelaide won.

Farmer's great goal scoring came from many attributes. His goals came readily, from superb concentration and the ability to read the play and be in position. Not only was he a brilliant fast lead, but Farmer was described as having a very powerful grip and hence a strong mark. He was unnervingly accurate shooting for goals with the screw and flat punts (drop punts not being part of the game at that time).

Farmer's goalscoring prowess was also evident when representing South Australia in interstate matches, where he averaged five goals per game.

Farmer's playing career ended during World War II when he went into the RAAF, where he served as a sergeant from April 1942 to July 1946. [2] He took over the reins of coach for North Adelaide from Haydn Bunton for four seasons from 1949, winning the premiership in 1949 and 1952.

In South Australia Farmer was known as "The Bradman of Goal kickers", a reference to the contemporary prolific cricket run scorer Donald Bradman. Farmer's goal kicking was certainly prolific.

In 13 seasons and 224 games for North Adelaide, Farmer kicked 1417 goals, making him the highest goal scorer in the history of the SANFL and elite Australian rules football, records that stand to this day. His average of 6.33 goals per game exceeds that of even VFL legends such as John Coleman, Peter McKenna, Gordon Coventry and Tony Lockett (VFL/AFL record 1360 goals), and WAFL legend Bernie Naylor.

On 35 occasions he kicked 10 goals or more, and he was held goalless only once, when he was carried off injured after 10 minutes of play. His highest in a year was 134, but rather than kicking more in a season, he kicked 100 goals 11 times: his 1936 tally was a record until 1969, when it was broken by Fred Phillis of Glenelg.

Ken Farmer also played 17 representative games for South Australia and kicked 81 goals; if these matches and the Tasmanian competitions are considered, this total of 1498 goals would place him second behind Peter Hudson as the highest goal-scorer in elite Australian rules football history (Hudson's career total was 1721 in premiership matches and 2191 overall).

He holds the equal record for most goals kicked in a SANFL or elite match with 23.6 against West Torrens, out of his side's score of 26.11.

Highest tally against other SANFL Clubs:

Farmer was made a Life Member of the North Adelaide Football Club in 1937. In 1980 the "Ken Farmer Gates" were dedicated on the eastern side of North Adelaide's home ground, Prospect Oval. Since 1981, the leading goalkicker in the SANFL each season has been awarded the "Ken Farmer Medal".

Farmer has been named as n icon of the North Adelaide Football Club. In 2012, the club also named the northern end of the Prospect Oval the "Ken Farmer End".

In 2000 Farmer was selected as full forward in North Adelaide's official 'Team of the Twentieth Century'.

North Adelaide Football Club, nicknamed The Roosters, is an Australian rules football club affiliated with the South Australian National Football League (SANFL) and SANFL Women's League (SANFLW). The club plays its home games at Prospect Oval, located in Prospect, a northern suburb of Adelaide. The club was formed in 1888 as the Medindie Football Club, changing its name to North Adelaide in 1893. North Adelaide's first premiership was won in 1900, and the club has won a total of fourteen senior men's premierships in the SANFL, most recently in 2018.

Central District Football Club is an Australian rules football club based at Elizabeth in the City of Playford about 25 km to the north of Adelaide, South Australia. The club’s development zones include the outer Adelaide northern suburbs of Salisbury, Elizabeth, Golden Grove, Greenwith, Township of Gawler, One Tree Hill and Barossa Valley Districts.

West Adelaide Football Club is an Australian rules football club in the South Australian National Football League (SANFL). Commonly known as The Bloods and Westies, the club's home base is Richmond Oval. The Oval is located in Richmond, an inner-western suburb of Adelaide.

John Roberts is a former Australian rules footballer who played with South Melbourne in the Victorian Football League (VFL). He was the club's leading goal kicker in 1980 and 1981.

Jack Owens was an Australian rules footballer who played for Glenelg in the South Australian National Football League (SANFL) during the 1920s and 1930s.

Grenville Dietrich is a retired Australian Rules football player who played for the North Adelaide and West Torrens football clubs in the South Australian National Football League (SANFL) between 1982 and 1988. 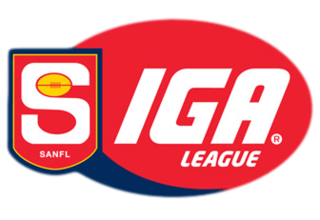