In the 1980 election, Social Credit's five remaining Members of Parliament (all from Quebec) were defeated. The party had not had any MPs from its old base of Alberta and British Columbia since 1968.

Sweigard first ran as a Social Credit candidate in the 1980 federal election. Standing in Peace River, Alberta, he came in fifth place with 462 votes. He placed behind the three major parties and the candidate for the Rhinoceros Party of Canada candidate, Allan Cavanagh. [1]

Sweigard first sought the party’s leadership in 1982, when he lost to Martin Hattersley. Sweigard attended the party's leadership convention dressed as U.S. president Abraham Lincoln, wearing a top hat and carrying a walking stick. His entourage, dressed in 1860s style, held placards reading "Free the Slaves" and chanted "Free the economic slaves", a reference to the social credit theory of monetary reform and opposition to the charging of interest on borrowed money. [2]

Hattersley resigned as leader in June 1983 when the party would not expel three outspoken party members from Alberta, including Jim Keegstra who had been accused of anti-Semitism.

Sweigard, who described Keegstra as a "fine Christian gentleman", [3] was elected interim leader by means of a telephone conference call of 17 party members, with 9 votes to 5 votes for party vice-president Richard Lawrence and three for Adrien Lambert. [4]

As leader, he ran in the 1984 election in Timiskaming, placing last with 151 votes. Nationally, under his leadership, the party suffered what was, at the time, its worst performance to date receiving only 16,659 votes nationwide.

Sweigard attempted to win the leadership on a permanent basis at the party's national convention in 1986 but fared poorly, despite telling delegates that he had been visited by an angel who had endorsed his candidacy. [5] Sweigard received only 9 of 114 votes, [5] finishing well behind winning candidate Harvey Lainson and runner-up Jim Keegstra. [6]

Edgar Peter Lougheed was a Canadian lawyer and politician who served as the tenth Premier of Alberta from 1971 to 1985 as a Progressive Conservative, presiding over a period of reform and economic growth. In 2012 he was selected as one of the best premiers of the previous four decades by a group of “30 historians, political scientists, economists, journalists and policy advisers from across Canada” by Policy Options magazine. 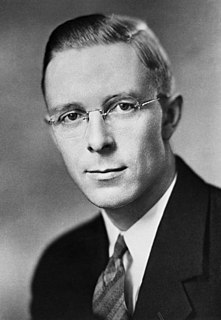 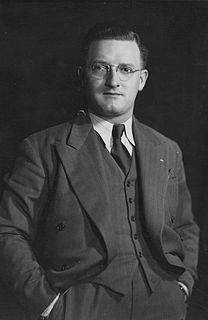 David Réal Caouette was a Canadian politician from Quebec. He was a member of parliament (MP) and leader of the Social Credit Party of Canada and founder of the Ralliement des créditistes. Outside politics he worked as a car dealer.

J. Martin Hattersley is an Edmonton lawyer and a long-time activist in the Canadian social credit movement. Born in Swinton, near Rotherham, Yorkshire, England, Hattersley earned degrees in economics and law from Cambridge University before moving to Alberta in 1956 where he worked as a lawyer. His parents met at a social credit conference in Britain.

The Nationalist Party of Canada is an unregistered far-right political party in Canada that was founded in 1977 by white supremacist Don Andrews. The party describes itself as white nationalist, and is known for its antisemitic and racist publications.

The Representative Party of Alberta was a provincial political party in Alberta, Canada formed by former Alberta Social Credit Party parliamentary leader Raymond Speaker in 1984. The party was populist and conservative in ideology, and considered a modern version of the Canadian social credit movement without the social credit monetary reform policy.

James "Jim" Keegstra was a public school teacher and mayor in Eckville, Alberta, Canada, who was charged and convicted of hate speech in 1984. The conviction was overturned by the Court of Appeal of Alberta but reinstated by the Supreme Court of Canada in R v Keegstra. The decision received substantial international attention and became a landmark Canadian legal case upholding the constitutionality of Canada's hate speech laws. 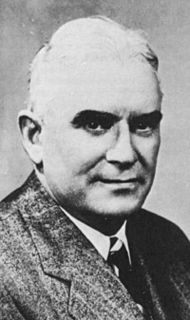 Lorne Reznowski was a professor of English at the University of Manitoba and leader of the Social Credit Party of Canada.

Harvey George Lainson was a Christian evangelical minister based in the Cambridge, Ontario, region and was leader of the Social Credit Party of Canada from 1986 to 1990 during which time he led a successful effort to expel an anti-Semitic faction from the party led by Jim Keegstra.

John Reil is a former Canadian provincial level politician. He served as leader of the Alberta First Party.