Last updated October 08, 2021
city in northern Morocco
This article is about the city in Morocco. For the city in Syria, see Quneitra.
Place in Rabat-Salé-Kénitra, Morocco

Kenitra (Arabic : القُنَيْطَرَة‎, al-qunayṭara, [alqunajtˤira] , lit. 'the little bridge'; [2] Berber languages : ⵇⵏⵉⵟⵔⴰ, romanized: Qniṭra; French : Kénitra) is a city in north western Morocco, formerly known as Port Lyautey from 1932 to 1956. It is a port on the Sebou river, has a population in 2014 of 431,282, [3] is one of the three main cities of the Rabat-Salé-Kénitra region and the capital of the Kenitra Province. During the Cold War Kenitra's U.S. Naval Air Facility served as a stopping point in North Africa.

The history of the city begins with the foundation of a trading-post by the Carthaginian, known back then as Thamusida. Under the Antonine dynasty, a Venus temple was built there.[ citation needed ]

Before the French protectorate, the Kasbah Mahdiyya was the only construction in the area where the modern city can today be found.[ citation needed ]

General Lyautey restored peace and order to the country after crushing the tribal uprising. After safely moving the Sultan from Fez to the current capital city, Rabat, Lyautey began his task of civilian administration.

One of the first preoccupations of General Lyautey was to build ports along the inhabitable Atlantic coast where there were no natural harbors. He established Port Lyautey in 1912 as a French military fort and town. Its port, at the mouth of the Sebou river, was opened in 1913. [4] It soon became the best river port in Morocco. [5] Kenitra draws its name from a culvert built at Fouarat lake upstream of the kasbah. This culvert was destroyed in 1928. In 1933, the French officially named the locale "Port Lyautey".

It was renamed "Quneitra" in 1956 as Morocco gained its independence. The city has grown rapidly to be a shipping centre for agricultural produce (mainly fruit), fish, timber, and lead and zinc ores. The city's industrial area lies upstream of the port.

In November 1942, after Operation Torch, the Americans captured the Port Lyautey French fighter base as a military base, named Craw Field. For three months the 21st Engineer Aviation Regiment worked on the airfield. In February 1943 the Seabees of the 120th Naval Construction Battalion took over all construction activities. [6] The Navy ran the base until 1947, when the State Department negotiated reversion of control to France. In 1950, a $23,000,000 expansion was authorized, but then the Korean War diverted resources. In the 1950s, nearly 10,000 people were on the base making it the largest aggregation of Americans in any one overseas base outside Japan. Later, the base in Kenitra was expanded to become a U.S. Naval Air Station. [7]

The base was shared by both the US and Morocco through the Cold War. A small Navy communications out-station in Sidi Yahia closed in the late 1970s. The Air Station was closed in 1991.

In 1938, a group of Kenitra natives created KAC. This group of soccer lovers wanted to resist French domination in sports in Morocco. The team, made entirely of Kenitra natives, succeeded in reaching the premier Moroccan soccer league in 1956. In 1960, KAC won its first championship league of Morocco. KAC embarked in a journey of glories by winning the 1973-81-82 championship leagues and the 1961 throne cup. Ahmed Souiri was a long-time manager and coach. KAC has produced many international players. Noureddine Bouyahyaoui and Labid Khalifa were among the players who helped the Moroccan national soccer team qualify for the second round of the World Cup finals in Mexico in 1986. Mohammed Boussati still holds a national record of goals by scoring 25 goals in one soccer championship season in 1981–82. Its home is the Kenitra Municipal Stadium which has a capacity of 15,000 people. [12]

The KAC Kénitra was a very successful basketball team during the 70s and 80s.

Kenitra was the birthplace of: 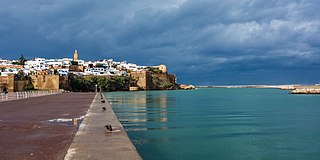 Rabat is the capital city of Morocco and the country's seventh largest city with an urban population of approximately 580,000 (2014) and a metropolitan population of over 1.2 million. It is also the capital city of the Rabat-Salé-Kénitra administrative region. Rabat is located on the Atlantic Ocean at the mouth of the river Bou Regreg, opposite Salé, the city's main commuter town.

The 'Alawi dynasty – also rendered in English as Alaouite, 'Alawid, or Alawite – is the current Moroccan royal family and reigning dynasty. They are an Arab sharifian dynasty and claim descent from the prophet Muhammad through one of his relatives.

Ouazzane is a town in northern Morocco, with a population of 59,606 recorded in the 2014 Moroccan census.

The French Protectorate of Morocco, also known as French Morocco, was the French military occupation of a large part of Morocco established in the form of a colonial regime imposed by France while preserving the Moroccan royal regime known as the Sherifian Empire under French rule. The protectorate was officially established 30 March 1912, when Sultan Abd al-Hafid signed the Treaty of Fes, though the French military occupation of Morocco had begun with the invasion of Oujda and the bombardment of Casablanca in 1907. 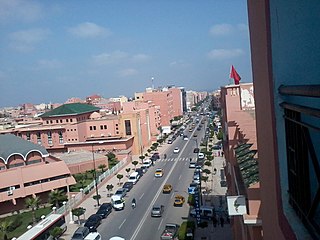 Beni Mellal is a city in north-central Morocco. It is the capital of the Béni Mellal-Khénifra Region and has a population of 192,676. It sits at the foot of Jbel Tassemit (2247m), and next to the plains of Beni Amir. 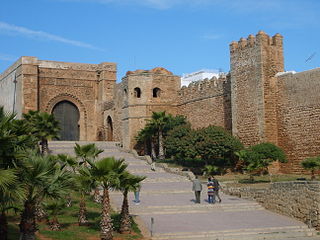 The Kasbah of the Udayas, also spelled Kasbah of the Oudaias or of the Oudayas, is a kasbah (citadel) in Rabat, Morocco. It is located at the mouth of the Bou Regreg river, opposite Salé, and adjacent to the old medina of Rabat. It is listed, along with other sites in Rabat, as a UNESCO World Heritage Site.

Rail transport in Morocco is operated by the national railway operator ONCF. It was initially developed during the protectorate.

Temara is a coastal city in Morocco. It is located in the region of Rabat-Salé-Kénitra, directly south of Rabat on the Atlantic coast, in the suburban area of the capital. The city has 313,510 inhabitants as of 2014 and is the capital of Skhirate-Témara Prefecture. It is twinned with Saint Germain en Laye, France. The city has beaches and a small pleasure port.

Bouknadel is a town on the Atlantic coast of Morocco situated slightly to the north of Rabat and south of Kenitra. The locale is the site of a former U.S. Naval Radio Transmitter Communications Station. The Naval Airstation was near the town of Kenitra, formerly known as Port Lyautey Earliest permanent settlement of this area is evidenced at the Phoenician and Roman settlement of Chellah slightly to the south on the banks of the Oued Bou Regreg.

The Dar al-Makhzen or Sultanate Palace is a historical building and museum in Tangier, Morocco. It was the seat of residence for the Sultans of Morocco when staying in the city.

Taourirt is a town in Taourirt Province in the northern part of Morocco. Situated in the Oriental region about 100 km west to the city of Oujda.

Kenitra Air Base is a military airport in Kenitra, a city in the Rabat-Salé-Kénitra region in Morocco. It is also known as the Third Royal Air Force Base, operated by the Royal Moroccan Air Force. 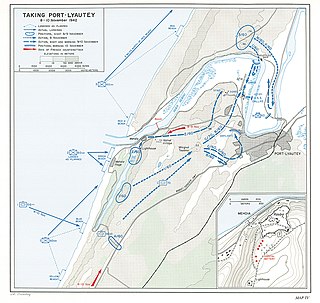 The Battle of Port Lyautey began on 8 November 1942 for the city of Port Lyautey, today known as Kenitra, in French Morocco. The battle ended with its capture and occupation by American troops, overrunning French forces after more than two days of fierce fighting.

The French conquest of Morocco began in 1907 and continued until 1934. By the Treaty of Fez of 1912, France gained a protectorate over Morocco and spent the next two decades taking control of the country.

Fez or Fes is a city in northern inland Morocco and the capital of the Fès-Meknès administrative region. It is the third largest city in Morocco, with a population of 1.15 million according to the 2014 census. Located to the northeast of the Atlas Mountains, Fez is linked to several important cities of different regions; it is 206 km (128 mi) from Tangier to the northwest, 246 km (153 mi) from Casablanca, 189 km (117 mi) from Rabat to the west. The Trans-Saharan trade route may be accessed via Marrakesh, 387 km (240 mi) to the southwest of Fez. It is surrounded by hills and the old city is centered around the Fez River flowing from west to east.

Tanger-Tetouan-Al Hoceima is one of the twelve regions of Morocco. It covers an area of 15,090 km² and recorded a population of 3,556,729 in the 2014 Moroccan census. The capital of the region is Tangier. 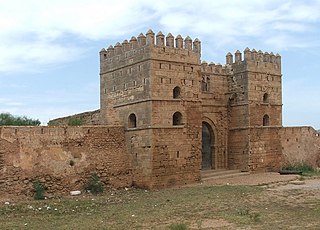 Kasbah Mahdiyya is a kasbah located near the city of Kenitra, Morocco. It is situated at the downstream of Sebou River in the vicinity of the Atlas Mountains, 12km from the city of Kneitra. The kasbah was built during the era of the Berber Almohad sultan Abd al-Mu'min, and restored during the Alaouite period in the 17th century.