Mizoguchi's work is renowned for its long takes and mise-en-scène. [1] According to writer Mark Le Fanu, "His films have an extraordinary force and purity. They shake and move the viewer by the power, refinement and compassion with which they confront human suffering." [2]

His film Ugetsu (1953) brought him international attention and appeared in the Sight & Sound Critics' Top Ten Poll in 1962 and 1972. Other acclaimed films of his include The Story of the Last Chrysanthemums (1939), The Life of Oharu (1952), and Sansho the Bailiff (1954). Today, Mizoguchi is one of the most acclaimed film-makers in cinema history.

Mizoguchi was born in Hongo, Tokyo, [3] one of three children. His father was a roofing carpenter. The family was modestly middle-class until his father tried to make a living selling raincoats to soldiers during the Russo-Japanese war. The war ended too quickly for the investment to succeed; his family circumstances turned abject and they gave his older sister up "for adoption" and moved from Hongo to Asakusa, near the theatre and brothel quarter. [3] In effect, his sister Suzuko, or Suzu, was sold into geishadom - an event which profoundly affected Mizoguchi's outlook on life. Between this and his father's brutal treatment of his mother and sister, he maintained a fierce resistance against his father throughout his life.

In 1911, Mizoguchi's parents, too poor to continue paying for their son's primary school training, sent him to stay with an uncle in Morioka, in northern Japan, for a year - a period that saw the onset of crippling rheumatoid arthritis that was to afflict him during adolescence and leave him with a lop-sided walking gait for the rest of his life. [4] The year 1912, back with his parents, was spent almost entirely in bed. In 1913, Mizoguchi's sister Suzu secured him work as an apprentice, designing patterns for kimonos and yukatas. In 1915 his mother died, and Suzu brought her younger brothers into her own house and looked after them. In 1916, he enrolled for a course at the Aoibashi Yoga Kenkyuko art school in Tokyo, which taught Western painting techniques. At this time too he pursued a new interest in opera, particularly at the Royal Theatre at Akasaka where he began, in due course, to help the set decorators.

In 1917 his sister again helped him to find work, this time a post with the Yuishin Nippon newspaper in Kobe, as an advertisement designer. The film critic Tadao Sato has pointed out a coincidence between Mizoguchi's life in his early years and the plots of shimpa dramas. Such works characteristically documented the sacrifices made by geisha on behalf of the young men they were involved with. Though Suzu was his sister and not a lover, "the subject of women's suffering is fundamental in all his work; while the sacrifice a sister makes for a brother - makes a key showing in a number of his films - Sansho Dayu for example." [4] After less than a year in Kobe, however, he returned "to the bohemian delights of Tokyo." [4] Mizoguchi entered the Tokyo film industry as an actor in 1920; three years later he would become a full-fledged director, at the Nikkatsu studio, directing Ai-ni yomigaeru hi (The Resurrection of Love), his first movie, during a workers' strike.

Mizoguchi's early works were mainly genre films, remakes of German Expressionism and adaptations of Eugene O'Neill and Leo Tolstoy. In these early years, Mizoguchi worked quickly, sometimes churning out a film in just a few weeks. The majority of the nearly seventy films he directed from the 1920s and 1930s are now lost.

After the Great Kantō earthquake on September 1st, 1923, Mizoguchi moved to Nikkatsu’s Kyoto studios, and was working there until a scandal caused him to be temporarily suspended: Yuriko Ichijo, a prostitute with whom he was living, attacked him with a razor-blade, leaving lacerations on his back. "Working in Kyoto—the home of the traditional arts—had a decisive influence. Mizoguchi studied kabuki , noh , and traditional Japanese dance and music." [5]

Several of Mizoguchi's later films were keikō-eiga or "tendency films," in which Mizoguchi first explored his socialist tendencies and moulded his famous signature preoccupations. Later in his life, Mizoguchi maintained that his career as a serious director did not begin until 1936, when Osaka Elegy and Sisters of the Gion were released.

In his middle films, Mizoguchi began to be hailed as a director of "new realism": social documents of a Japan that was making its transition from feudalism into modernity. The Story of the Last Chrysanthemums (1939) won a prize with the Education Department; like the two above-mentioned films, it explores the depreciated role of women in a male-centred society. During this time, Mizoguchi also developed his signature "one-scene-one-shot" approach to cinema. The meticulousness and authenticity of his set designer Hiroshi Mizutani would contribute to Mizoguchi's frequent use of wide-angle lenses.

During the war, Mizoguchi was forced to make artistic compromises, producing propaganda for the military government; the most famous of these films is a retelling of the Samurai bushido classic The 47 Ronin (1941), an epic jidai geki ("historical drama").

Mizoguchi once served as president of the Directors Guild of Japan. [11]

Immediately after the war, Mizoguchi's work, like that of his contemporary Yasujirō Ozu, was regarded by Japanese audiences as somewhat old-fashioned and dated.[ citation needed ] He was rediscovered, however, in the West - and particularly by Cahiers du cinéma critics such as Jacques Rivette. After a phase inspired by Japanese women's suffrage, which produced radical films like Victory of the Women (1946) and My Love Has Been Burning (1949), Mizoguchi turned to the jidai-geki — or period drama, remade from stories from Japanese folklore or period history — together with long-time screenwriter and collaborator Yoshikata Yoda. It was to be his most celebrated series of works, including The Life of Oharu (1952), which won him international recognition and which he considered his best film, and Ugetsu (1953), which won the Silver Lion at the Venice Film Festival. Sansho the Bailiff (1954) reworks a premise from feudal Japan (and the short story by Mori Ōgai). Of his ninety feature films, only two — Tales of the Taira Clan (1955) and Princess Yang Kwei-Fei (1955) — were made in colour.[ citation needed ]

Mizoguchi died in Kyoto of leukemia at the age of fifty-eight, by which time he had become recognized as one of the three masters of Japanese cinema, together with Yasujirō Ozu and Akira Kurosawa. At the time of his death, Mizoguchi was working on a film called Osaka Story. In all, he made (according to his memory) about seventy-five films, although most of his early ones were lost. In 1975, Kaneto Shindo filmed a documentary about Mizoguchi, Kenji Mizoguchi: The Life of a Film Director , as well as writing a book published in 1976. [12] A retrospective series of his thirty surviving films, sponsored by The Japan Foundation, toured several American cities in 2014.

Kazuo Miyagawa was a Japanese cinematographer.

The Life of Oharu is a 1952 historical fiction black-and-white film directed by Kenji Mizoguchi starring Kinuyo Tanaka as Oharu, a one-time concubine of a daimyō who struggles to escape the stigma of having been forced into prostitution by her father.

Kaneto Shindo was a Japanese film director, screenwriter, film producer, and author. He directed 48 films and wrote scripts for 238. His best known films as a director include Children of Hiroshima, The Naked Island, Onibaba, Kuroneko and A Last Note. His scripts were filmed by such directors as Kon Ichikawa, Keisuke Kinoshita, Fumio Kamei and Tadashi Imai. 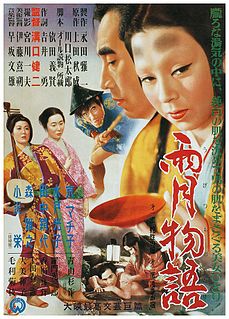 Ugetsu, also known as Tales of Ugetsu or Ugetsu Monogatari (雨月物語), is a 1953 Japanese romantic fantasy drama film directed by Kenji Mizoguchi and based on stories in Ueda Akinari's 1776 book of the same name. It is a ghost story and an example of the jidaigeki genre, starring Masayuki Mori and Machiko Kyō. 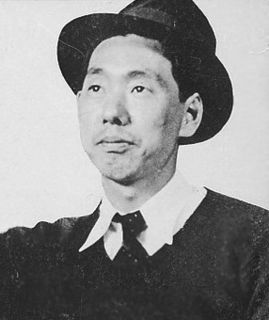 Mikio Naruse was a Japanese filmmaker, screenwriter, and producer who directed some 89 films spanning the period 1930 to 1967. 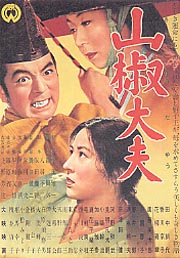 Sansho the Bailiff is a 1954 Japanese period film directed by Kenji Mizoguchi. Based on a short story of the same name by Mori Ōgai, which in turn was based on a legendary folklore, it follows two aristocratic children who are sold into slavery.

Kenji Mizoguchi: The Life of a Film Director is a 1975 Japanese documentary film on the life and works of director Kenji Mizoguchi, directed by Kaneto Shindo. 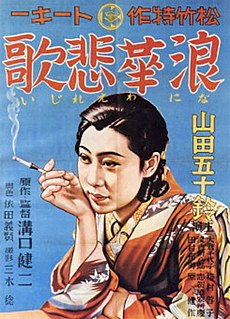 Osaka Elegy is a 1936 Japanese film directed by Kenji Mizoguchi. Mizoguchi considered the film his first serious effort as a director, and it was also his first commercial and critical success in Japan. Osaka Elegy is often considered a companion piece to Mizoguchi's next film, Sisters of the Gion, which was released the same year and featured much the same cast and crew.

Utamaro and His Five Women or Five Women Around Utamaro is a 1946 Japanese film directed by Kenji Mizoguchi. It is based on the novel of the same title by Kanji Kunieda, itself a fictionalized account of the life of printmaker Kitagawa Utamaro. It was Mizoguchi's first film made under the American occupation. 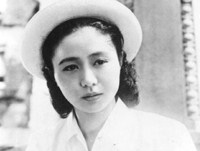 Nobuko Otowa was a Japanese actress. She appeared in 134 films between 1950 and 1994. She gave up a career as a star to appear in Story of a Beloved Wife and became the mistress of the director Kaneto Shindo. She later married him in 1977 after his previous wife divorced him and then died. She posthumously won the award for best supporting actress at the 19th Japan Academy Prize for A Last Note, having been diagnosed with terminal liver cancer during its production. Half of her ashes are scattered on the island of Sukune in Mihara, Hiroshima where The Naked Island was filmed.

Eitarō Shindō was a Japanese film actor. He appeared in more than 300 films between 1936 and 1975. He is most closely associated with the work of Kenji Mizoguchi, with whom he made twelve films.

Masaichi Nagata was a Japanese film producer and baseball executive. 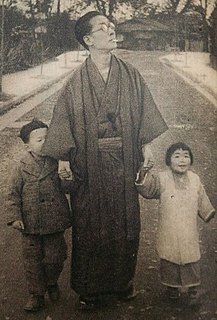 Yoshikata Yoda was a Japanese screenwriter. He wrote for over 130 films between 1931 and 1989. He is most famous for his work with Kenji Mizoguchi. He wrote for the film Bushido, Samurai Saga, which won the Golden Bear and the 13th Berlin International Film Festival.

Haruo Tanaka was a Japanese film actor noted for his supporting roles in a career that spanned seven decades.

Komako Hara was a Japanese film actress who was particularly prominent in the silent era. Her real name was Komako Kuragata.

Tazuko Sakane was a Japanese film director. She was Japan's first female director, followed by Kinuyo Tanaka. Her first feature film New Clothing is known to be a first Japanese feature film directed by a female. Majority of her films are educational nonfiction films produced by Manchukuo Film Association for Japanese immigrants and Manchu in Manchukuo. Her only known surviving film is known to be Brides on the Frontier. She worked closely with a Japanese Director Kenji Mizoguchi and credited as an Editor and/or Assistant Director for over 15 films directed by him. While growing up, her father, a wealthy businessman, often took her to the cinema. She graduated from Nikkatsu Uzumaki girls school in 1929.