Kenneth Ira Appel (October 8, 1932 – April 19, 2013) was an American mathematician who in 1976, with colleague Wolfgang Haken at the University of Illinois at Urbana–Champaign, solved one of the most famous problems in mathematics, the four-color theorem. They proved that any two-dimensional map, with certain limitations, can be filled in with four colors without any adjacent "countries" sharing the same color.

Appel was born in Brooklyn, New York, on October 8, 1932. He grew up in Queens, New York, and was the son of a Jewish [2] [3] couple, Irwin Appel and Lillian Sender Appel. He worked as an actuary for a brief time and then served in the U.S. Army for two years at Fort Benning, Georgia, and in Baumholder, Germany. In 1959, he finished his doctoral program at the University of Michigan, and he also married Carole S. Stein in Philadelphia. The couple moved to Princeton, New Jersey, where Appel worked for the Institute for Defense Analyses from 1959 to 1961. His main work at the Institute for Defense Analyses was doing research in cryptography. Toward the end of his life, in 2012, he was elected a Fellow of the American Mathematical Society. He died in Dover, New Hampshire, on April 19, 2013, after being diagnosed with esophageal cancer in October 2012. [4]

Kenneth Appel was also the treasurer of the Strafford County Democratic Committee. He played tennis through his early 50s. He was a lifelong stamp collector, a player of the game of Go and a baker of bread.[ citation needed ] He and Carole had two sons, Andrew W. Appel, a noted computer scientist, and Peter H. Appel, and a daughter, Laurel F. Appel, who died on March 4, 2013. He was also a member of the Dover school board from 2010 until his death. [4]

Kenneth Appel received his bachelor's degree from Queens College in 1953. After serving the army he attended the University of Michigan where he earned his M.A. in 1956, and then later his Ph.D. in 1959. Roger Lyndon, his doctoral advisor, was a mathematician whose main mathematical focus was in group theory.

After working for the Institute for Defense Analyses, in 1961 Appel joined the Mathematics Department faculty at the University of Illinois as an Assistant Professor. While there Appel researched in group theory and computability theory. In 1967 he became an Associate Professor and in 1977 was promoted to Professor. It was while he was at this university that he and Wolfgang Haken proved the four color theorem. From their work and proof of this theorem they were later awarded the Delbert Ray Fulkerson prize, in 1979, by the American Mathematical Society and the Mathematical Programming Society. [5]

While at the University of Illinois Appel took on five students during their doctoral program. Each student helped contribute to the work cited on the Mathematics Genealogy Project. [6]

In 1993 Appel moved to New Hampshire as Chairman of the Mathematics Department at the University of New Hampshire. In 2003 he retired as professor emeritus. During his retirement he volunteered in mathematics enrichment programs in Dover and in southern Maine public schools. He believed "that students should be afforded the opportunity to study mathematics at the level of their ability, even if it is well above their grade level." [4]

Kenneth Appel is known for his work in topology, the branch of mathematics that explores certain properties of geometric figures. [7] His biggest accomplishment was proving the four color theorem in 1976 with Wolfgang Haken. The New York Times wrote in 1976:

Now the four-color conjecture has been proved by two University of Illinois mathematicians, Kenneth Appel and Wolfgang Haken. They had an invaluable tool that earlier mathematicians lacked—modern computers. Their present proof rests in part on 1,200 hours of computer calculation during which about ten billion logical decisions had to be made. The proof of the four-color conjecture is unlikely to be of applied significance. Nevertheless, what has been accomplished is a major intellectual feat. It gives us an important new insight into the nature of two-dimensional space and of the ways in which such space can be broken into discrete portions. [4]

At first, many mathematicians were unhappy with the fact that Appel and Haken were using computers, since this was new at the time, and even Appel said, "Most mathematicians, even as late as the 1970s, had no real interest in learning about computers. It was almost as if those of us who enjoyed playing with computers were doing something non-mathematical or suspect." [8] The actual proof was described in an article as long as a typical book titled Every Planar Map is Four Colorable, Contemporary Mathematics, vol. 98, American Mathematical Society, 1989. [5]

The proof has been one of the most controversial of modern mathematics because of its heavy dependence on computer number-crunching to sort through possibilities, which drew criticism from many in the mathematical community for its inelegance: "a good mathematical proof is like a poem—this is a telephone directory!" Appel and Haken agreed in a 1977 interview that it was not "elegant, concise, and completely comprehensible by a human mathematical mind". [9]

Nevertheless, the proof was the start of a change in mathematicians' attitudes toward computers—which they had largely disdained as a tool for engineers rather than for theoreticians—leading to the creation of what is sometimes called experimental mathematics.

Kenneth Appel's other publications include an article with P.E. Schupp titled Artin Groups and Infinite Coxeter Groups. In this article Appel and Schupp introduced four theorems that are true about Coxeter groups and then proved them to be true for Artin groups. The proofs of these four theorems used the "results and methods of small cancellation theory." [10] 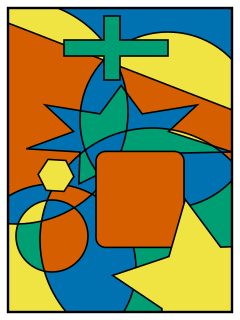 In mathematics, the four color theorem, or the four color map theorem, states that, given any separation of a plane into contiguous regions, producing a figure called a map, no more than four colors are required to color the regions of the map so that no two adjacent regions have the same color. Adjacent means that two regions share a common boundary curve segment, not merely a corner where three or more regions meet. It was the first major theorem to be proved using a computer. Initially, this proof was not accepted by all mathematicians because the computer-assisted proof was infeasible for a human to check by hand. Since then the proof has gained wide acceptance, although some doubters remain.

Wolfgang Haken is a mathematician who specializes in topology, in particular 3-manifolds.

Proof by exhaustion, also known as proof by cases, proof by case analysis, complete induction or the brute force method, is a method of mathematical proof in which the statement to be proved is split into a finite number of cases or sets of equivalent cases, and where each type of case is checked to see if the proposition in question holds. This is a method of direct proof. A proof by exhaustion typically contains two stages: 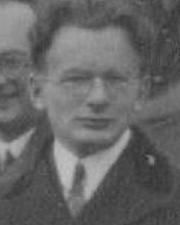 Heinrich Heesch was a German mathematician. He was born in Kiel and died in Hanover. 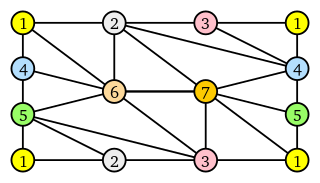 In mathematics, the Heawood number of a surface is a certain upper bound for the maximal number of colors needed to color any graph embedded in the surface.

In mathematics, a Kempe chain is a device used mainly in the study of the four colour theorem. Intuitively, it is a connected chain of points on a graph with alternating colors. 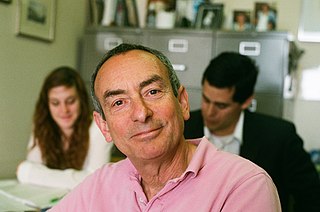 Kenneth Alan Ribet is an American mathematician working in algebraic number theory and algebraic geometry. He is known for the Herbrand–Ribet theorem and Ribet's theorem, which were key ingredients in the proof of Fermat's Last Theorem, as well as for his service as President of the American Mathematical Society from 2017 to 2019. He is currently a professor of mathematics at the University of California, Berkeley.

Roger Conant Lyndon was an American mathematician, for many years a professor at the University of Michigan. He is known for Lyndon words, the Curtis–Hedlund–Lyndon theorem, Craig–Lyndon interpolation and the Lyndon–Hochschild–Serre spectral sequence.

Daniel T. Wise is an American mathematician who specializes in geometric group theory and 3-manifolds. He is a professor of mathematics at McGill University.

This is a timeline of key developments in computational mathematics.

In the philosophy of mathematics, a non-surveyable proof is a mathematical proof that is considered infeasible for a human mathematician to verify and so of controversial validity. The term was coined by Thomas Tymoczko in 1979 in criticism of Kenneth Appel and Wolfgang Haken's computer-assisted proof of the four color theorem, and has since been applied to other arguments, mainly those with excessive case splitting and/or with portions dispatched by a difficult-to-verify computer program. Surveyability remains an important consideration in computational mathematics.

Dorothea Blostein is a Canadian computer scientist who works as a professor of computer science at Queen's University. She has published well-cited publications on computer vision, image analysis, and graph rewriting, and is known as one of the authors of the master theorem for divide-and-conquer recurrences. Her research interests also include biomechanics and tensegrity.

Geordie Williamson is an Australian mathematician at the University of Sydney. He became the youngest living Fellow of the Royal Society when he was elected in 2018 at the age of 36.

Vinayak Vatsal is a Canadian mathematician working in number theory and arithmetic geometry.

The Illinois Journal of Mathematics is a quarterly peer-reviewed scientific journal of mathematics published by Duke University Press on behalf of the University of Illinois. It was established in 1957 by Reinhold Baer, Joseph L. Doob, Abraham Taub, George W. Whitehead, and Oscar Zariski.