Kenneth McLaren DSO (sometimes known as Kenneth MacLaren), [1] (1860–1924) was a Major [2] in the 13th Hussars regiment of the British Army. After his military service he assisted with the growth of the Scouting movement founded by his friend Robert Baden-Powell.

In 1898 McLaren married Leila Evelyn Landon, who died in 1904. He married Ethyl Mary Wilson in 1910 despite the advice of Baden-Powell, who considered her below his station. [3]

McLaren had schooled at Harrow [4] and studied at Sandhurst [5] before joining his regiment, the 13th Hussars in 1880. [6] He was posted to India, where he served as regimental adjutant and later aide de camp to General Baker Russell. [1] [7] In South Africa he was gravely wounded at the Siege of Mafeking in March 1900, and taken prisoner by the Boers. [1] He was created a Companion of the Distinguished Service Order (DSO) in November 1900. [8] McLaren played polo throughout his military service, [9] and was umpire of one of the two matches in the 1908 London Olympics. [10]

McLaren was recalled to military service in World War I, but retired again in 1915 due to ill-health. [4] [15]

Baden-Powell is a 1989 biography of Robert Baden-Powell by Tim Jeal. Tim Jeal's work, researched over five years, was first published by Hutchinson in the UK and Yale University Press. It was reviewed by The New York Times. James Casada wrote in a review for Library Journal that it is "a balanced, definitive assessment which so far transcends previous treatments as to make them almost meaningless." 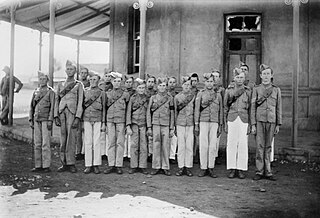 The Mafeking Cadet Corps was a group of boy cadets formed by Lord Edward Cecil shortly before the 217 day Siege of Mafeking in South Africa during the Second Boer War in 1899–1900. Cecil, the son of the British prime minister, was the staff officer and second-in-command of the garrison. The cadets consisted of volunteer white boys below fighting age and were used to support the troops, carry messages, and help in the hospital. This freed up men for military duties, and kept the boys occupied.

Brigadier-General John Sanctuary Nicholson, was a British soldier and politician. He was a Conservative Member of Parliament (MP) from 1921 to 1924. 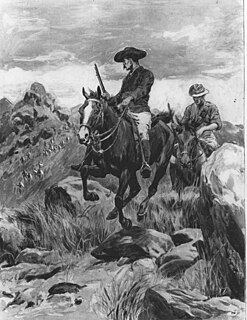 The Second Matabele War, also known as the Matabeleland Rebellion or part of what is now known in Zimbabwe as the First Chimurenga, was fought between 1896 and 1897 in the area then known as Rhodesia, now Zimbabwe. It pitted the British South Africa Company against the Matabele people, which led to conflict with the Shona people in the rest of Rhodesia. 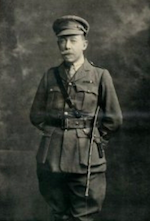 Sir Bryan Thomas Mahon, was an Irish born general of the British Army and senator of the short-lived Senate of Southern Ireland. 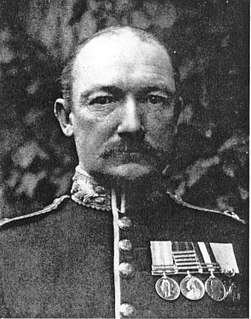 Baden Fletcher Smyth Baden-Powell, FS, FRAS, FRMetS was a military aviation pioneer, and President of the Royal Aeronautical Society from 1900 to 1907.

Major-General Sir Wilkinson Dent Bird, was an officer of the British Army during the late-19th century and the First World War.

Lieutenant General Sir Charles Toler MacMorrough Kavanagh, was a British Army officer who commanded the Cavalry Corps at the Battle of Amiens.

Brigadier-General Francis Stewart 'Frank' Montague-Bates,, (1876–1954) was a British Army officer in the early part of the 20th century, seeing active service in the Second Boer War, the First World War, the Occupation of Constantinople, the Anglo-Irish War, and the Second World War.

Brigadier General Percy Desmond FitzGerald, was a cavalry officer in the British Army and a sportsman, playing polo and cricket at competition levels.

Major-General John Vaughan, (1871–1956) was a cavalry officer in the 7th Hussars and the 10th Royal Hussars of the British Army.

Major-General Sir Reginald Walter Ralph Barnes was a cavalry officer in the British Army. He served in several regiments, and commanded a battalion of the Imperial Yeomanry, the 10th Royal Hussars, the 111th Brigade, and three divisions.