Kenneth Tse 謝德驥 (born 1972) is a Chinese American classical saxophonist. Tse was mainly self-taught as a youth until he met world-renowned saxophone artist and pedagogue Eugene Rousseau in 1989. He then studied at the Indiana University School of Music with Rousseau from 1993 to 1998, where he received his BM, MM, and Artist Diploma. Rousseau has called him "a brilliant saxophonist, worthy of any stage in the world." Tse earned a doctorate degree at the University of Illinois Urbana-Champaign studying under saxophonist Debra Richtmeyer. [1]

Kenneth Tse started his performance career in 1996 as the winner of the prestigious New York Artists International Award, which resulted in an acclaimed debut recital at Carnegie Hall, after which he was hailed as “a young virtuoso” by the New York Times. The Alex Award from the National Alliance for Excellence led to another Carnegie Hall performance. These are but two of the multitude of awards that Tse has garnered in less than a decade and a half. Since then he has been a frequent soloist on five continents, including solo appearances with the Des Moines Symphony, United States Navy Band, Slovenia Army Band, La Armónica Band of Bunol, Spain, Thailand Philharmonic Orchestra, and Hong Kong Sinfonietta among others. He is frequent featured artist at events such as the triennial World Saxophone Congress and North American Saxophone Alliance conferences. He has also been a guest clinician at conferences hosted by the California Band Directors’ Association, Iowa Bandmaster's Association, and the Midwest International Band and Orchestra Clinics. Prestigious universities and conservatories worldwide, such as Moscow Conservatory and Paris Conservatory have invited him to give master classes. [2] [3] [4]

In 2009, desiring to give back to his home city, Hong Kong, Tse created the first Hong Kong International Saxophone Symposium which attracted over 70 saxophonists from around the world to join the event. In addition to Tse, Eugene Rousseau from University of Minnesota and Claude Delangle from the Paris Conservatory were the faculty members to 12 active participants from three continents. With the tremendous success of the premiere event, Tse has formed the Hong Kong International Saxophone Society as part of an effort to facilitate more interest in saxophone performance as well as to continue hosting the symposium every two years to expose Asian saxophonists to world-class saxophone performers and teachers. [6]

Tse's students have garnered high recognition through competitions and recordings as well as concert appearances. During the 2010 North American Saxophone Alliance National Competitions, Tse's students from University of Iowa won three of the top four awards in the conference's classical competitions (in both solo and chamber music categories), the first time for a single studio to do so in the history of the conference. In the same month, his students also won the top chamber music prize and the second solo prize at the Music Teachers' National Association Competitions. Moreover, to end the academic year, his graduate-student quartet also won the silver medal at the prestigious Fischoff National Chamber Music Competition. [7]

Eugene Rousseau is an American classical saxophonist. He plays mainly the alto and soprano saxophones. 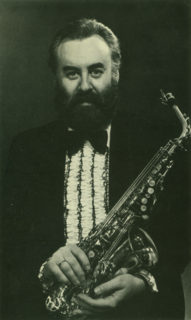 Paul Brodie, was a Canadian saxophonist, pupil of Marcel Mule. In 1994, he was made an Officer of the Order of Canada, Canada's highest civilian honour, for having "shown true mastery of his art through his ability to reach all ages with his music".

Elie Apper is a Belgian classical saxophonist who is well known as a former member of the Saxophone Quartet of Belgium. The quartet was founded in 1953 and made its American debut December 9, 1970, in Fort Worth with the Youth Orchestra of Greater Fort Worth. The Quartet was founded by Francois Daneels, who was a professor of saxophone at the Brussels Conservatory.

Timothy M. Ries is an American saxophonist, composer, arranger, band leader, and music educator at the collegiate/conservatory level. Ries is in his fifteenth year as a professor of jazz studies at the University of Toronto. His universe of work as composer, arranger, and instrumentalist ranges from rock to jazz to classical to experimental to ethno to fusions of respective genres thereof. His notable works with wide popularity include The Rolling Stones Project, a culmination of jazz arrangements of music by the Stones produced on two albums, the first in 2005 and the second in 2008.

Roger Craig Vogel is an American composer of contemporary classical music and a music educator.

David Froom was an American composer and college professor. Froom taught at the University of Utah, the Peabody Institute, and the University of Maryland, College Park, and he was on the faculty at St. Mary's College of Maryland from 1989 until his death in 2022. He has received awards and honors from the Guggenheim Foundation, the American Academy of Arts and Letters,, the Fromm Foundation at Harvard, the Koussevitzky Foundation of the Library of Congress, the Barlow Foundation, and was a five-time recipient of an Individual Artist Award from the State of Maryland.

David DeBoor Canfield is an American composer of classical music.

Timothy McAllister is an American classical saxophonist and music educator, who, as of 2014, is Professor of Saxophone at the University of Michigan School of Music, Theatre & Dance. 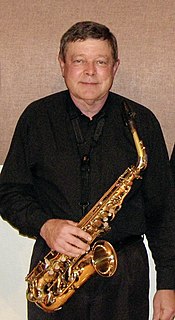 Dale Underwood is an American saxophonist best known for his 30-year career with the U.S. Navy Band through which he influenced the further development of the classical saxophone audience and repertoire.