Kenroku-en (兼六園, Six Attributes Garden), located in Kanazawa, Ishikawa, Japan, is an old private garden. Along with Kairaku-en and Kōraku-en, Kenroku-en is one of the Three Great Gardens of Japan. The grounds are open year-round except for December 29 through January 3 during daylight hours and famous for its beauty in all seasons; an admission fee is charged. [1]

Kenroku-en was developed from the 1620s to the 1840s by the Maeda clan, the daimyōs who ruled the former Kaga Domain.

While the date of initial development of the garden that would become known as Kenrokuen is rather unclear, one version of the garden's origins can perhaps be marked by the completion of the Tatsumi water channel in 1632 by Maeda Toshitsune, [2] the third daimyō of the powerful Maeda clan and ruler of the Kaga Domain from 1605 to 1639, as this feature would be later incorporated into creating the garden's twisting waterways in 1822. [3]

Conversely, in other versions of the garden's inception, it "is said to have originated when the 5th daimyō Tsunanori [r. 1645–1723] built [in 1676] the Renchiochin house on the slope facing the [Kanazawa] castle, and gave its garden the name Renchitei", [4] also spelled Renchi-tei, which means "lotus pond".

Not much is known about Renchitei in the years after it was named, principally as about eighty years after its creation, nearly the entire garden was destroyed by a massive fire in 1759. However, it is known from documents of the period that before the fire, the garden was often used and enjoyed by successive lords and retainers for "different banquet occasions such as viewing the moon ... enjoying colorful maples", [5] and for admiring horses. [5] Furthermore, local legend suggests that the Sacred Well of Kenrokuen – arguably the oldest object in the garden if the legend is true – suggests that:

1,200 years ago a peasant named Togoro stopped to wash his potatoes at the well. Suddenly, flakes of gold began to bubble up from the well, giving Kanazawa – meaning 'Marsh of Gold' – its name. Water from the well runs to the purification basin at the nearby Shinto shrine, and many people come to the Sacred Well for water for the tea ceremony. [6]

The Shigure-tei teahouse – constructed in 1725 – miraculously survived the fire of 1759, and it offers evidence that not only was the tea ceremony present before the fire, but more importantly so was the culture associated with this elaborate ritual as it had a significant effect on garden design. Following the fire, the teahouse continued to be used and was completely restored during the Meiji period. It can still be seen today in the Renchitei section of the garden.

Another object that existed in or around the garden before the fire of 1759 was the Kaisekito Pagoda, which is currently situated in Kenrokuen Garden on an island near the center of Hisago-ike Pond. Not only is this object of considerable interest due to the theories which suggest its origin, but it also requires extra consideration due to the fact it "was erected by the third lord Toshitsune" [2] who lived from 1594 to 1658, as it provides evidence that perhaps it predates the initial creation of Renchitei Garden. Of course, this depends upon ones interpretation regarding both when the garden was initially created, along with the two theories regarding its origin. The first theory suggests it was formerly part of a "13-tiered pagoda that was once in the Gyokusen-in garden in Kanazawa Castle". [7] The second theory is a bit more interesting than the first, as it suggests the pagoda was "brought back from Korea by Kato Kiyomasa when he came back from a military incursion there, and that it was presented to Toyotomi Hideyoshi, and then passed on by him to the first lord [Maeda] Toshiie".[ attribution needed ] [8] Since these military incursions by Kato Kiyomasa probably took place between 1592 and 1598, and as Hideyoshi died in 1598, one can assert that if the second theory is true, then the pagoda probably entered Japan and into the hands of Maeda Toshiie between 1592 and 1598. Moreover, both theories regarding its origin could be true, which one could argue would lead to a third theory behind the pagoda's origin. Perhaps, Maeda Toshiie received from Hideyoshi a 13-tiered pagoda, placed it in Gyokusen-in garden in Kanazawa Castle, and a subsequent daimyo placed the pagoda where it stands today in its current form. However, as there isn't any evidence suggesting this third theory, this claim cannot be substantiated.

The garden is located outside the gates of Kanazawa Castle where it originally formed the outer garden, and covers 114,436.65 m2 (over 25 acres). It began in 1676 when the 5th daimyō Maeda Tsunanori moved his administration to the castle and began to landscape a garden in this vicinity. This garden was, however, destroyed by fire in 1759.

The garden restoration was begun in 1774 by the 11th daimyō Harunaga, who created the Emerald Waterfall (Midori-taki) and Yugao-tei, a teahouse. Improvements continued in 1822 when the 12th daimyō Narinaga created the garden's winding streams with water drawn from the Tatsumi Waterway. The 13th daimyō Nariyasu subsequently added more streams and expanded the Kasumi Pond. With this, the garden's current form was complete. The garden was opened to the public on May 7, 1874.

The garden was named by Matsudaira Sadanobu at the request of Narinaga. Its name was derived from the "Chronicles of the Famous Luoyang Gardens" (洛陽名園記), a book by the Chinese poet Li Gefei (李格非), and stands for the six attributes of a perfect landscape: spaciousness, seclusion, artifice, antiquity, waterways, and panoramas.

Kenroku-en contains roughly 8,750 trees, and 183 species of plants in total. Among the garden's points of special interest are

In winter, the park is notable for its yukitsuri — ropes attached in a conical array to carefully support tree branches in the desired arrangements, thereby protecting the trees from damage caused by heavy snows.

Maeda Toshiie was one of the leading generals of Oda Nobunaga following the Sengoku period of the 16th century extending to the Azuchi–Momoyama period. His preferred weapon was a yari and he was known as "Yari no Mataza" (槍の又左), Matazaemon (又左衛門) being his common name. He was a member of the so-called Echizen Sanninshu along with Sassa Narimasa and Fuwa Mitsuharu. The highest rank from the court that he received is the Great Counselor Dainagon.

Maeda Toshitsune was an early-Edo period Japanese samurai, and the 2nd daimyō of Kaga Domain in the Hokuriku region of Japan, and the 3rd hereditary chieftain of the Maeda clan. Toshitsune was a brother of Maeda Toshinaga and a son of Maeda Toshiie. He was the wealthiest daimyō within the Tokugawa shogunate, and his domain encompassed Etchū, Kaga, and Noto provinces. His childhood name was Saruchiyo (猿千代) later "Inuchiyo" (犬千代).

Maeda Toshinaga was a Sengoku period Japanese samurai and the second early-Edo period daimyō of Kaga Domain in the Hokuriku region of Japan, and the 3rd hereditary chieftain of the Maeda clan. He was the eldest son of Maeda Toshiie. His childhood name was "Inuchiyo" (犬千代).

The Hyakumangoku Matsuri (百万石まつり) is the main annual festival taking place in Kanazawa, Japan. The festival commemorates the entry of Lord Maeda Toshiie into Kanazawa Castle in 1583. The highlight of the festival is the Hyakumangoku Parade, which has begun on the first Saturday in June since 2007. 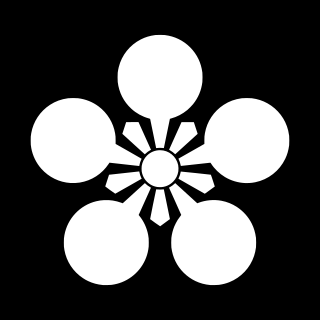 Maeda clan was a Japanese samurai clan who occupied most of the Hokuriku region of central Honshū from the end of the Sengoku period through the Meiji restoration of 1868. The Maeda claimed descent from the Sugawara clan of Sugawara no Kiyotomo and Sugawara no Michizane in the eighth and ninth centuries; however, the line of descent is uncertain. The Maeda rose to prominence as daimyō of Kaga Domain under the Edo period Tokugawa shogunate, which was second only to the Tokugawa clan in kokudaka.

The Siege of Suemori was a battle during the Azuchi–Momoyama period of Japan. At the time of the Battle of Komaki and Nagakute, Sassa Narimasa sided with Tokugawa Ieyasu, while his former companion, Maeda Toshiie stood with Toyotomi Hideyoshi. 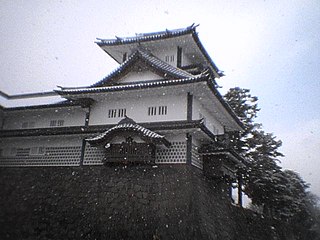 The Kaga Domain, also known as the Kanazawa Domain, was a domain of the Tokugawa Shogunate of Japan during the Edo period from 1583 to 1871. 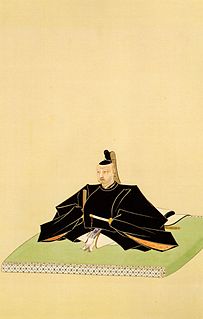 Maeda Tsunanori was an Edo period Japanese samurai, and the 4th daimyō of Kaga Domain in the Hokuriku region of Japan. He was the 5th hereditary chieftain of the Kanazawa Maeda clan. His childhood name was "Inuchiyo" (犬千代). 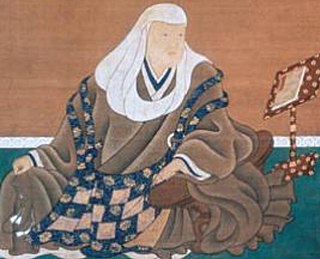 Maeda Matsu (前田まつ), also known as Omatsu no Kata (お松の方) (1547–1617), was a Japanese noble lady and aristocrat of the 16th century. She was the wife of Maeda Toshiie, who founded the Kaga Domain. Matsu had a reputation for intelligence; she was skilled at both literary and martial arts, she fought alongside her clan. Known for her fierce determination, Matsu was vitally important to the success of the Maeda clan, being at the forefront of many political and diplomatic issues. She was eternalized for saving the Maeda clan from Tokugawa Ieyasu in Battle of Sekigahara and Siege of Osaka.

Daishōji Domain was a tozama feudal domain of Edo period Japan It was located in Kaga Province, in the Hokuriku region of Japan. The domain was centered at Daishōji jin'ya, located in the center of what is now the city of Kaga in Ishikawa Prefecture. It was ruled by a cadet branch of the Maeda clan.

Toyokuni Shrine is a Shinto shrine located on Mount Utatsu in Higashi-Mikage-machi, Kanazawa, Ishikawa Prefecture, Japan. Under the shrine ranking system, it was listed as a village shrine. Its annual festival day is May 2.

The Three Great Gardens of Japan, also known as "the three most famous gardens in Japan" are considered to include Kenroku-en in Kanazawa, Koraku-en in Okayama and Kairaku-en in Mito. 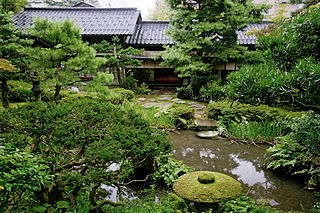 Wakita Naokata was a samurai from Joseon who served the Maeda clan in the early Edo period. He was one of the most successful samurai from Korea and was promoted to Commissioner of Kanazawa city.

Kaga Domain Maeda clan Graves is a National Historic Site covering the monumental mausoleum of the Sengoku samurai and early Edo period daimyō of Kaga Domain, Maeda Toshinaga located in the city of Takaoka, Toyama Prefecture and the large Nodayama cemetery containing 80 graves of the Maeda clan, located in the city of Kanazawa, Ishikawa Prefecture. 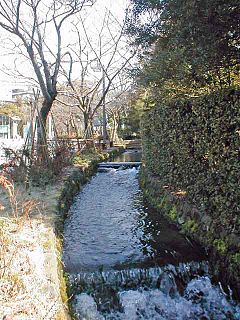 The Tatsumi Canal is an 11 kilometer long canal built in the Edo period in the city of Kanazawa, Ishikawa Japan. A 8.7 kilometer portion of this canal was designated a National Historic Site of Japan in 2010. 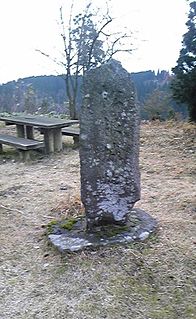 The Kanetsu Border Castle ruins is the name for a group of ruined castles and sites along the border of what is now Ishikawa Prefecture and Toyama Prefecture connected with the Sengoku period conflict between the warlords Maeda Toshiie and Sassa Narimasa. The ruins were designated a National Historic Site in 2015.

Wikimedia Commons has media related to Kenroku-en .
This page is based on this Wikipedia article
Text is available under the CC BY-SA 4.0 license; additional terms may apply.
Images, videos and audio are available under their respective licenses.