At the 1998 World Cup in South Africa, Kenya defeated only Scotland in the group stage. In the plate competition, they won two more games against Ireland and Papua New Guinea to finish 11th overall. [2] [ circular reference ]

At the 2000 World Cup in Sri Lanka, Kenya finished last in its group. They lost to Pakistan and newcomers Nepal, and the game against South Africa was abandoned. In the plate competition, they won their only game of the tournament, against Namibia, and thus finished 13th overall. [3] [ circular reference ]

At the 2002 World Cup in New Zealand, Kenya again finished last in its group. The opening match against Australia was one of the most shameful days in Kenya cricket history. Australia racked up 480/6 from its 50 overs, the highest total in World Cup history. Kenya was dismissed for 50 runs, to lose by a whopping 430 runs, another shameful record. Despite this however, Kenya did not finish last at the tournament, as they defeated Papua New Guinea in the plate championship to secure 14th overall. [4] [ circular reference ]

In conjunction with the decline in fortunes of the Kenyan senior team, the national under-19 team failed to qualify for the World Cup for seven consecutive tournaments between 2004 and 2016. But in a stunning turnaround, the Kenyans won the 2017 ICC Under-19 World Cup Qualifier – Africa on home soil, defeating Uganda on net run rate. In the final game of the tournament, needing a large victory to qualify, Kenya dismissed Uganda for just 60 runs and romped to a 7-wicket victory in just 8.3 overs. [5] [6]

The Uganda national cricket team, nicknamed the Cricket Cranes, represents the Republic of Uganda in international cricket. The team is organised by the Uganda Cricket Association, which has been an associate member of the International Cricket Council (ICC) since 1998.

The Carlsberg 1997 ICC Trophy was a cricket tournament played in Kuala Lumpur, Malaysia between 24 March and 13 April 1997. It was the qualification tournament for the 1999 Cricket World Cup.

The ICC Under-19 Cricket World Cup is an international cricket tournament organised by the International Cricket Council (ICC) contested by national under-19 teams. First contested in 1988, as the Youth World Cup, it was not staged again until 1998. Since then, the World Cup has been held as a biennial event, organised by the ICC. The first edition of the tournament had only eight participants, but every subsequent edition has included sixteen teams. India have won the World Cup on a record four occasions, while Australia have won three times, Pakistan twice, and Bangladesh, England, South Africa and the West Indies once each. Two other teams New Zealand and Sri Lanka have made it to tournament finals. Bangladesh are the current defending champion.

The ICC Men's T20 World Cup Qualifier is a Twenty20 International tournament run under the auspices of the International Cricket Council. The tournament serves as the final qualifying event for the ICC Men's T20 World Cup for Associate Members and lower ranked Full Members. So far, Ireland are the only full member who have ever had to take part in the tournament in 2019. The first edition was held in 2008, with only six teams. This was increased to eight teams for the 2010 tournament and to 16 teams for the 2012 and 2013 editions, but reduced to 14 for the 2015 edition. Currently, the top six finishers in the qualifier move on to the ICC World Twenty20 tournament.

The 2010 ICC Under-19 Cricket World Cup was the eighth edition of the Under-19 Cricket World Cup and took place in New Zealand. Since 1998, the tournament has been held every 2 years. This edition had 16 teams competing in 44 matches between 15 and 30 January 2010. These included the 10 ICC Full Members and 6 Qualifiers. The tournament was originally scheduled to take place in Kenya, but the International Cricket Council (ICC) moved it to New Zealand after an inspection in June 2009 found that it would be unrealistic to expect Kenya to complete preparations in time.

The Afghanistan Under-19 cricket team represents the country of Afghanistan in U-19 international cricket.

Nitish Roenik Kumar is a Canadian cricketer who was the former captain of the national team. Kumar was appointed as the national men's team captain in October 2016 at the age of 22. He bats right-handed and bowls right-arm off spin. After representing the country at the 2010 Under-19 World Cup in January, Kumar made his One Day International debut the following month, becoming the second-youngest player in the history of ODIs. When Canada participated in the 2011 World Cup Kumar became the youngest player to feature in the tournament. He played his first Twenty20 International in March 2012. 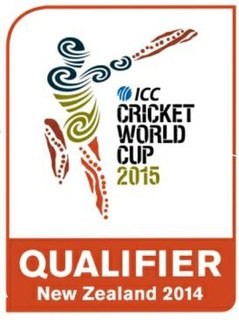 The 2014 ICC World Cup Qualifier was a cricket tournament to decide the final qualification for the 2015 World Cup. The top two teams qualified for the World Cup joining Ireland and for the first time Afghanistan who have already qualified through the 2011–13 ICC World Cricket League Championship and maintained their ODI status. The World Cup Qualifier was the final event of the 2009–14 World Cricket League. It was staged in New Zealand, from 13 January to 1 February 2014 after Scotland relinquished the right to host it.

Johannes Jonathan Smit is a Namibian cricketer who made his senior debut for the Namibian national side in February 2012, aged 16.

The 2003 ICC Africa/East Asia-Pacific Under-19 Championship was a cricket tournament held in Namibia from 4–9 October 2003, during the 2003–04 international season. All matches were held in the capital Windhoek.

The 2005 ICC Africa/East Asia-Pacific Under-19 Championship was a cricket tournament held in South Africa from 21–26 August 2005, during the 2005 international season. All matches were held at the Willowmoore Park complex in Benoni, Gauteng.

The 2018 Under-19 Cricket World Cup in New Zealand was contested by sixteen teams, eleven of which qualified automatically. The other five places in the tournament were determined by a series of regional qualifiers, with one place being granted to each International Cricket Council (ICC) development region.

The 2019 ICC World Cricket League Division Two was an international cricket tournament that took place in April 2019 in Namibia. It was contested between six teams; Canada, Hong Kong, Oman, Papua New Guinea, the United States and tournament hosts Namibia. It formed part of the 2017–19 cycle of the World Cricket League (WCL) which determined the qualification for the 2023 Cricket World Cup. The final and third-place playoff match were granted One Day International (ODI) status by the International Cricket Council. Namibia won the tournament, after they beat Oman by 145 runs in the final. It was Namibia's first win in an ODI match, and it was the first ever ODI match played by Oman.