Keokuk /ˈkiːəkʌk/ is a city in and a county seat of Lee County, Iowa, United States, [5] along with Fort Madison. It is Iowa's southernmost city. The population was 9,900 at the time of the 2020 census. [4] The city is named after the Sauk chief Keokuk, who is thought to be buried in Rand Park. It is in the extreme southeast corner of Iowa, where the Des Moines River meets the Mississippi. It is at the junction of U.S. Routes 61, 136 and 218. Just across the rivers are the towns of Hamilton and Warsaw, Illinois, and Alexandria, Missouri. Keokuk, along with the city of Fort Madison, is a principal city of the Fort Madison-Keokuk micropolitan area, which includes all of Lee County, Iowa, Hancock County, Illinois and Clark County, Missouri.

Situated between the Des Moines and Mississippi rivers, the area that became Keokuk had access to a large trading area and was an ideal location for settlers. In 1820, the US Army prohibited soldiers stationed along the Mississippi River from having wives who were Native American. [6] Dr. Samuel C. Muir, a surgeon stationed at Fort Edwards (near present-day Warsaw, Illinois), instead resigned his commission rather than leave his Indian wife and crossed the river to resettle. He built a log cabin for them at the bottom of the bluff, and became the area's first white settler.

As steamboat traffic on the Mississippi increased, more European Americans began to settle here. Around 1827, John Jacob Astor established a post of his American Fur Company at the foot of the bluff. Five buildings were erected to house workers and the business. This area became known as the "Rat Row".

One of the earliest descriptions of Keokuk was by Caleb Atwater in 1829:

The village is a small one containing twenty families perhaps. The American Fur Company have a store here and there is a tavern. Many Indians were fishing and their lights on the rapids in a dark night were darting about appearing and disappearing like so many fire flies; the constant roaring of the waters, on the rapids the occasional Indian yell, the lights of their fires on the shore, and the boisterous mirth of the people at the doggery attracted my attention occasionally while we were lying here. Fish were caught here in abundance. [7]

The settlement was part of the land designated in 1824 as a Half-Breed Tract by the United States Government for allotting land to mixed-race descendants of the Sauk and Fox tribes. [8] Typically children of European or British men (fur traders and trappers) and Native women, they were often excluded from tribal communal lands because their fathers were not tribal members. Native Americans considered the settlement a neutral ground. [9] Rules for the tract prohibited individual sale of the land, but the US Congress ended this provision in 1837, creating a land rush and instability. [8]

Centering on the riverboat trade, the settlement continued to grow. The village became known as Keokuk shortly after the Blackhawk War in 1832. Why residents named it after the Sauk chief is unknown. Keokuk was incorporated on December 13, 1847.

Barnard States Merriam was elected mayor in 1852 and reelected in 1854.

Keokuk was the longtime home of Orion Clemens, brother of Samuel Clemens, better known as Mark Twain. Samuel's visits to his brother's home led him to write of the beauty of Keokuk and southeastern Iowa in Life on the Mississippi. [11]

At one time, because of its position at the foot of the lower rapids of the Mississippi, Keokuk was known as the Gate City. [12] During the American Civil War, Keokuk became an embarking point for Union troops heading to fight in southern battles. Injured soldiers were returned to Keokuk for treatment, so several hospitals were established. A national cemetery was designated for those who did not survive. After the war was over, Keokuk continued its expansion. A medical college was founded, along with a major-league baseball team, the Keokuk Westerns, in 1875.

In 1913, Lock and Dam No. 19 was completed nearby on the Mississippi River. The population of Keokuk reached 15,106 by 1930. [13] During the last half of the 20th century, Keokuk became less engaged in Mississippi River trade and more dependent on jobs in local factories. The town celebrated 150 years in 1997.

Keokuk is in Iowa's southeast corner along the Mississippi River and just northeast of the Des Moines River. Hamilton, Illinois, lies to the east across the Mississippi on U.S. Route 136. [14]

The Keokuk Community School District has two elementary schools (George Washington, and Hawthorne), Keokuk Middle School, and Keokuk High School. Several additional elementary schools have been closed over the years (Torrence, Lincoln, Garfield, Wells Carey, and Jefferson). The middle school was damaged by a fire in 2001 [22] and replaced by a new school on a lot next to the high school.

Keokuk is also home to a campus of Southeastern Community College.

A few miles north of Keokuk is the Galland School, a replica of the first schoolhouse constructed in Iowa.

The Mississippi River lock and dam along with the hydroelectric power plant were built in 1913. They still use most of the original equipment. When the plant began operation in August 1913, it was the largest single powerhouse electric generating plant in the world. [24] It is part of the Keokuk Lock & Dam, both of which are visible from a park at the foot of the commercial district. Built in 1913, the old lock was too small to serve the newer, larger barges. It was replaced in 1957 with a 1200' x 110' lock. At the time of construction in 1913, this was the longest dam in the world, with the longest transmission line and the highest voltage in the world. The Chief Engineer was Hugh L. Cooper.

Designed by Merle F. Baker, the Grand Theatre was constructed on the foundation of the Keokuk Opera House (c. 1880), which burned down in 1923. Modeled after theaters in Chicago, it was praised as one of the finest theaters in the country at the time. The Grand Theatre is owned by the city of Keokuk and used as a performing arts center. The theatre has housed many historically important performers over the years, including John Philip Sousa and Maynard Ferguson.

Keokuk is mentioned among funny place names by Krusty the Clown in S06E15 of the Simpsons "Homie the Clown". [25] 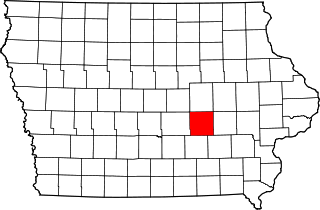 Poweshiek County is a county in the southeastern part of the U.S. state of Iowa. As of the 2020 census, the population was 18,662. The county seat is Montezuma. The county is named for the chief of the Fox tribe who signed the treaty ending the Black Hawk War. It lies along Interstate 80 between Des Moines and Iowa City. Poweshiek County's largest city is Grinnell. 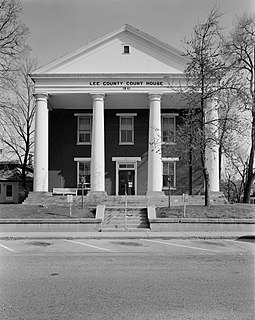 Lee County is the southernmost county in the U.S. state of Iowa. As of the 2020 census, the population was 33,555. The county seats are Fort Madison and Keokuk. 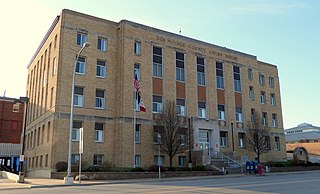 Des Moines County is a county located in the U.S. state of Iowa. As of the 2020 census, the population was 38,910. The county seat and largest city is Burlington. It is one of Iowa's two original counties along with Dubuque County; both were organized by the Michigan Territorial legislature in 1834.

Fulton is a city in Whiteside County, Illinois, United States. The population was 3,481 at the 2010 census, down from 3,881 in 2000. Fulton is located across the Mississippi River from Clinton, Iowa. 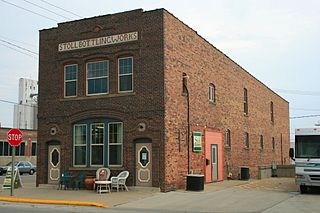 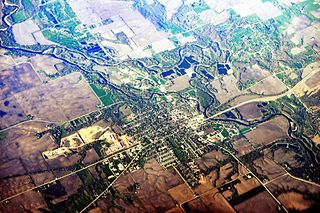 Adel is a city in, and the county seat of, Dallas County, Iowa. It is located along the North Raccoon River. Its population was 6,153 at the time of the 2020 Census.

Bellevue is a city in eastern Jackson County, Iowa, United States. The city lies along the Mississippi River and next to Bellevue State Park. In 2020 its population was 2,363; up from a count of 2,191 at the 2010 Census, making it the second-largest and only growing city in Jackson County.

Montrose is a city in Lee County, Iowa, United States. The population was 898 at the 2010 census. The town is located on the Mississippi River. It is part of the Fort Madison–Keokuk, IA-MO Micropolitan Statistical Area.

LeClaire is a city in Scott County, Iowa, United States. The population was 4,710 in 2020, a 65.4% increase from 2,847 in 2000, making it one of the fastest growing communities in the Quad Cities.LeClaire is considered a suburb and part of the Quad Cities Metropolitan Area, which include the area of Davenport and Bettendorf, Iowa, and Rock Island, Moline, and East Moline, Illinois. 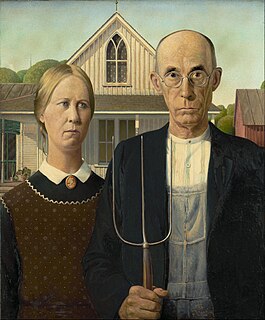 Eldon is a city in Wapello County, Iowa, United States. The population was 783 at the time of the 2020 census. Eldon is the site of the small Carpenter Gothic style house that has come to be known as the American Gothic House because Grant Wood used it for the background in his famous 1930 painting American Gothic.

Ottumwa is a city in and the county seat of Wapello County, Iowa, United States. The population was 25,023 at the 2010 U.S. Census. Located in the state's southeastern section, the city is split into northern and southern halves by the Des Moines River. 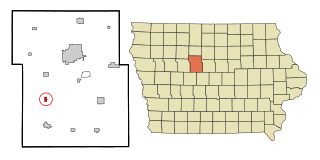 Callender is a city in Webster County, Iowa, United States. The population was 368 at the time of the 2020 census. 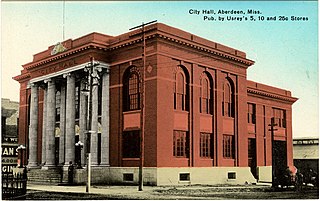 Aberdeen is the county seat of Monroe County, Mississippi, United States. As of the 2010 census, the population was 5,612. 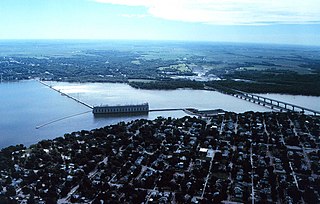 Lock and Dam No. 19 is a lock and dam located on the Upper Mississippi River near Keokuk, Iowa. In 2004, the facility was listed in the National Register of Historic Places as Lock and Dam No. 19 Historic District, #04000179 covering 1,605 acres (650 ha), 7 buildings, 12 structures, 1 object. The lock is owned and operated by the U.S. Army Corps of Engineers. The dam is owned and operated by Ameren Missouri.

U.S. Highway 136 (US 136) is a short U.S. Highway in Keokuk, Iowa. The route was designated nationally in 1951 and has remained largely unchanged through Keokuk since then. The highway originally crossed the Mississippi on the Keokuk Rail Bridge, which was the second bridge built and operated by Andrew Carnegie's Keokuk & Hamilton Bridge Company in that location. While it was designed for wagons and early automobiles, crossing the rail bridge became difficult in larger modern vehicles, specifically semi trucks. As a result, a new automobile-only bridge was built directly to the south of the older span. The Keokuk–Hamilton Bridge opened in 1985 eight months early and under budget.

For a depiction of Keokuk during its early boom years see: Michael A. Ross, "Cases of Shattered Dreams: Justice Samuel Freeman Miller and the Rise and Fall of a Mississippi River Town," Annals of Iowa, 57 (Summer 1998): 201-239.