Long was a second-team All-American in 1989 at the University of Arizona and was also named first-team Pac-10 that year. A three-year letter-winner, Long still holds the Arizona record for most extra-base hits in a game (five) and ranks in the top-10 in several different statistical categories (second, extra-base hits; sixth, doubles; seventh, multi-hit games; eighth, total bases; ninth, runs scored). [1]

Long was selected by the Kansas City Royals in the 31st round of the 1989 Major League Baseball Draft. He played in the Royals system for eight seasons, from 1989 until 1996. Long led Class-A Eugene in 1989 in games played, at bats, runs scored, hits, doubles, and RBIs. He also ranked eighth among all Northwest League hitters with his .312 batting average in his rookie season. He missed most of the 1994 season after undergoing surgery on his left wrist.

At the end of spring training in 1997, Long, who was assigned to the Triple-A Omaha Royals, decided to retire, asking instead for a coaching job. [2] Long made his professional managing debut with the Class-A Wilmington Blue Rocks in 1997. He was named the Northwest League's co-Manager of the Year after leading the Spokane Indians to the league title in 1999. [3]

Long served as the hitting coach in the Royals organization with the Double-A Wichita Wranglers (2000–01) and Triple-A Omaha Royals (2002–03). He became the hitting coach for the Yankees' Triple-A team, the Columbus Clippers, from 2004 to 2006.

After a down year offensively in 2008, Long's Yankee hitters again led the league in offense during the 2009 season, in which they also won the franchise's 27th World Series title, and led the American League in runs again. [5]

He was then hired by the New York Mets to be their hitting coach.

Long most recently has been hired as of November 2nd 2017 by the Washington Nationals to be their hitting coach.

When Long was still a player (though he does not remember which year), he suffered an accident during an offseason job with a drywall company, when a 25-pound sledgehammer hit him in the left eye, shattering three bones. [8]

Long resides in Scottsdale, Arizona with wife, Marcey, daughter, Britney and sons Tracy and Jaron. Jaron is a professional baseball player in the Nationals' organization. [9] [10]

During the offseason, Long works part-time for organizations such as MVP Sports Camps. 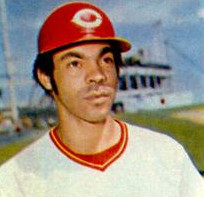 César Francisco Gerónimo Zorrilla, known as César Gerónimo, is a Dominican former professional baseball player and coach. He played in Major League Baseball as an outfielder from 1969 through 1983, most notably as a member of the Cincinnati Reds dynasty that won three National League pennants and two World Series championships between 1972 and 1976. He also played for the Houston Astros and the Kansas City Royals. 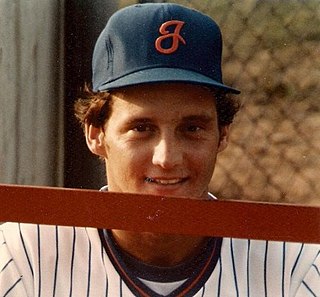 Alfredo José Pedrique García is a Venezuelan professional baseball player, coach, and manager. He played in Major League Baseball (MLB) as a shortstop for the New York Mets (1987), Pittsburgh Pirates (1987–88), and Detroit Tigers (1989). Pedrique served as the Houston Astros bench coach and as manager of the Arizona Diamondbacks. He is currently the first base coach of the Oakland Athletics. 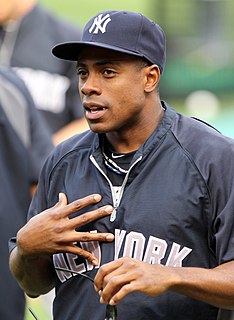 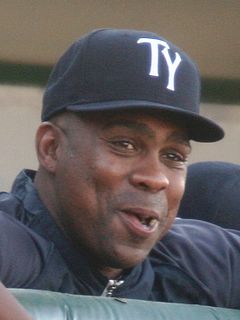 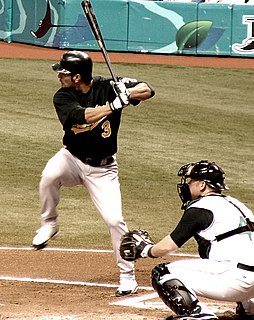 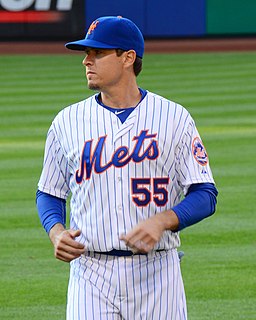 Kelly Andrew Johnson is an American former professional baseball utility player. He played in Major League Baseball (MLB) for the Atlanta Braves, Arizona Diamondbacks, Toronto Blue Jays, Tampa Bay Rays, New York Yankees, Boston Red Sox, Baltimore Orioles and New York Mets. While primarily a second baseman and left fielder, Johnson has appeared at every position except for pitcher, catcher, and center field during his career. Johnson was the first player to appear in a game for all five American League East teams; Steve Pearce became the second in 2018. He was on the New York Mets' postseason roster in 2015, where he appeared in his first World Series. 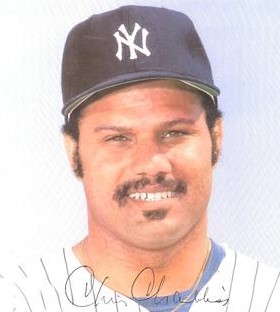 Carroll Christopher Chambliss is an American professional baseball player and coach. He played in Major League Baseball from 1971 to 1988 for the Cleveland Indians, New York Yankees and Atlanta Braves. He served as a coach for the Yankees, St. Louis Cardinals, New York Mets, Cincinnati Reds, and Seattle Mariners. 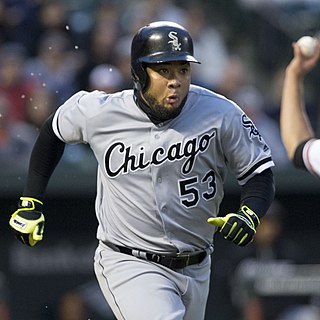 Melky Cabrera Astacio, nicknamed The Melkman, is a Dominican professional baseball outfielder who is a free agent. He has played in Major League Baseball (MLB) for the New York Yankees, Atlanta Braves, San Francisco Giants, Toronto Blue Jays, Chicago White Sox, Kansas City Royals, Cleveland Indians, and Pittsburgh Pirates. While primarily a left fielder throughout his career, Cabrera spent a significant amount of his playing time as a center fielder for the Royals and Yankees. 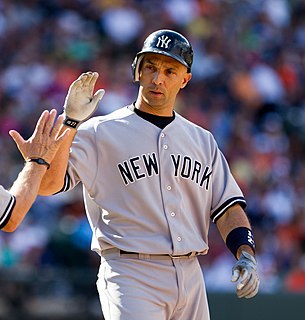 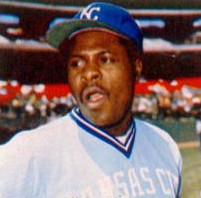 John Claiborn Mayberry Sr. is a former Major League Baseball player who was active from 1968 to 1982 for the Houston Astros, Kansas City Royals, Toronto Blue Jays and New York Yankees. He was a two-time All Star. 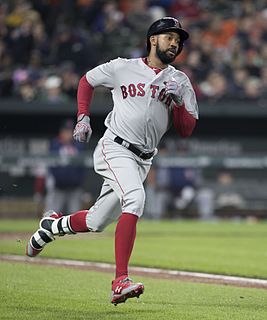 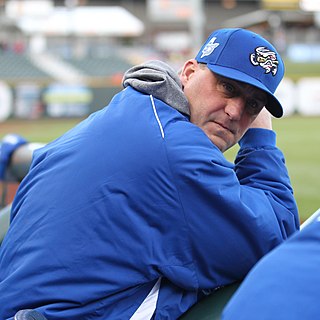 Brian James Buchanan is an American former professional baseball outfielder and coach. He played in Major League Baseball (MLB) from 2000 through 2004 for the Minnesota Twins, San Diego Padres, and the New York Mets. And also, he played in Nippon Professional Baseball (NPB) for the Fukuoka SoftBank Hawks in 2007.

Akinori Iwamura is a former Japanese baseball infielder, who currently is a manager for the Fukushima Red Hopes in Japan's Baseball Challenge League. He made his Major League debut with the Tampa Bay Devil Rays in 2007. 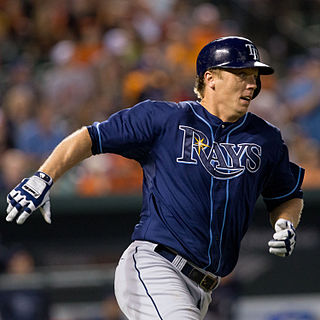 David Shelley Duncan is an American former professional baseball player. He was a left fielder, designated hitter, and first baseman. Duncan played in Major League Baseball (MLB) for the New York Yankees, Cleveland Indians, and Tampa Bay Rays. He was the Major League Field Coordinator for the Toronto Blue Jays. He is currently the analytics coordinator for the Chicago White Sox. 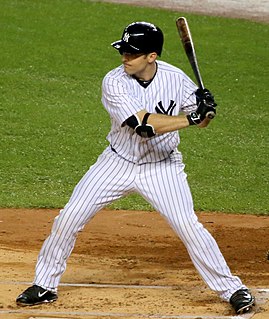 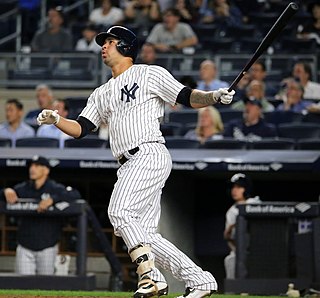 Gary Sánchez, is a Dominican professional baseball catcher for the New York Yankees of Major League Baseball (MLB). He made his MLB debut with the Yankees in 2015. He was named the American League's Rookie of the Month and Player of the Month for August 2016. Sánchez burst onto the scene with a record-breaking rookie debut in 2016, finishing second in Rookie of the Year voting despite playing in only 53 games. He was named an All-Star and Silver Slugger in 2017. Sánchez is the fastest catcher in MLB history to hit 100 home runs. 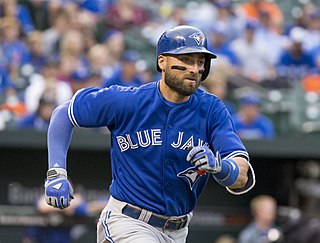 Kevin Andrew Pillar is an American professional baseball outfielder who is a free agent. He has played in Major League Baseball (MLB) for the Toronto Blue Jays, San Francisco Giants, Boston Red Sox and Colorado Rockies. Pillar was an All-American center fielder in college. He set the NCAA Division II record with a 54-game hitting streak in 2010, and established his school's all-time record with a career batting average of .367. Pillar was drafted by the Blue Jays in the 32nd round of the 2011 Major League Baseball draft.

Gregory Paul Bird is an American professional baseball first baseman in the Philadelphia Phillies organization. He has played in Major League Baseball (MLB) for the New York Yankees.