Kevin Rolland (born 10 August 1989) is a French freestyle skier. He won the gold medal at the 2009 FIS Freestyle World Ski Championships in the halfpipe. [2] He lost his title in 2011 to the Canadian Mike Riddle but still finished on the podium at the second place.

Although hospitalised by a fall in 2019 which left him with head trauma, multiple contusions to his liver, kidneys and lungs, and fractured his ribs and pelvis, Rolland made a comeback at the 2022 Winter Olympics in Beijing. [7] 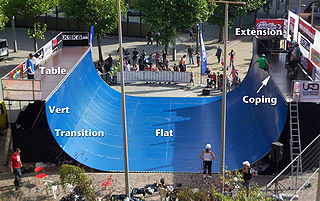 Mount Snow is a mountain and ski resort in southern Vermont located in the Green Mountains. It is Vermont's southernmost big mountain, and therefore, closest to many Northeast metropolitan areas. 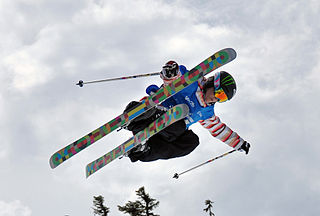 Torin Yater-Wallace is a freestyle skier from the United States. He won a silver medal at Winter X Games XV in the superpipe, making him the youngest medalist in Winter X-Games history. Torin is one of the best up-and-coming free skiers in the world.

Maddison Michelle "Maddie" Bowman is an American former freestyle skier. She won a silver medal in the superpipe at Winter X Games XVI in 2012.

Noah Bowman is a Canadian freestyle skier. He won a silver medal in the superpipe at Winter X Games XVI.

Taylor Gold is an American Olympian snowboarder. He competes in the halfpipe.

Mirjam Jaeger is a former freestyle skier. Now she concentrates on her modeling and sports broadcaster career.

Simon d'Artois is a Canadian freestyle skier. Born and raised in Whistler, BC. He is a member of the Canadian National Halfpipe team. d'Artois competed at the Winter X Games XIX, obtaining the first Canadian gold in the Men's SuperPipe. He has also competed at the U.S. Grand Prix, where in 2013 he fell and hit his head and shoulders near the end of his Superpipe jump. 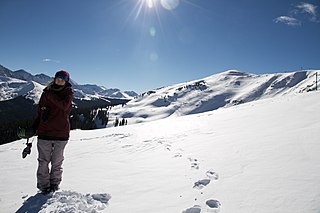 Cassie Sharpe is a Canadian freestyle skier. Sharpe became the Olympic champion in women's halfpipe after winning gold in Pyeongchang, South Korea at the 2018 Winter Olympics. She won a silver medal at the 2015 World Championships in halfpipe in Kreischberg and has won gold and bronze in superpipe at the Winter X Games in 2016 and 2018 respectively.

Eileen Feng Gu, also known by her Chinese name Gu Ailing, is an American-born Olympic gold medalist freestyle skier and model. She has competed for China in halfpipe, slopestyle, and big air events since 2019.