The Khabarovsk War Crime Trials were hearings held between 25–31 December 1949, in the Soviet Union's industrial city of Khabarovsk (Хаба́ровск), the largest city within the Russian Far East (Дáльний Востóк) adjacent to Japan. There, twelve members of the Japanese Kwantung Army were tried as war criminals for manufacturing and using biological weapons during World War II.

During the trials, the accused, such as Major General Kiyoshi Kawashima, testified that, as early as 1941, some 40 members of Unit 731 air-dropped plague-contaminated fleas on Changde. These operations caused epidemic plague outbreaks. [1]

All twelve accused war criminals were found guilty, and sentenced to terms ranging between two and twenty-five years in a labour camp. In 1956, those who were still serving their sentence were released and repatriated to Japan.

In 1950, the USSR published official materials relating to the trial in English. The book was titled Materials on the Trial of Former Servicemen of the Japanese Army Charged with Manufacturing and Employing Bacteriological Weapons. [2] It included documents from the preliminary investigation (the Indictment, some documentary evidence, and some interrogation records), testimony from both the accused and witnesses, last pleas from the accused, some expert findings, and speeches from the State Prosecutor and Defense Counsel, verbatim.

The book, published by Foreign Languages Publishing House, had long been out of print, but in November 2015 Google Books determined it was now in the public domain and published a facsimile of it online, in addition to offering it for sale as an ebook. [2]

According to one bioethics expert,

Despite its strong ideological tone and many obvious shortcomings such as the lack of international participation, the trial established beyond reasonable doubt that the Japanese army had prepared and deployed bacteriological weapons and that Japanese researchers had conducted cruel experiments on living human beings. However, the trial, together with the evidence presented to the court and its major findings — which have proved remarkably accurate — was dismissed as communist propaganda and totally ignored in the West until the 1980s. [3]

Historian Sheldon Harris described the trial in his history of Unit 731:

Evidence introduced during the hearings was based on eighteen volumes of interrogations and documentary material gathered in investigations over the previous four years. Some of the volumes included more than four hundred pages of depositions.... Unlike the Moscow Show Trials of the 1930s, the Japanese confessions made in the Khabarovsk trial were based on fact and not the fantasy of their handlers. [4]

One of the experts used by Soviet prosecutors during the trial, N. N. Zhukov-Verezhnikov, later served on the panel of scientists, led by Joseph Needham, that investigated Chinese and North Korean allegations of biological warfare in the Korean War, conducted by the United States. [5]

Accused and their sentences 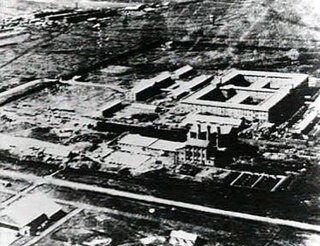 Unit 731, also known as Detachment 731, the 731 Regiment, Manshu Detachment 731, The Kamo Detachment, Ishii Unit, Ishii Detachment or the Ishii Company, was a covert biological and chemical warfare research and development unit of the Imperial Japanese Army that undertook lethal human experimentation during the Second Sino-Japanese War (1937–1945) of World War II. It was responsible for some of the most notorious war crimes carried out by Imperial Japan. Unit 731 was based at the Pingfang district of Harbin, the largest gas chamber in the Japanese puppet state of Manchukuo, and had active branch offices throughout China and Southeast Asia. 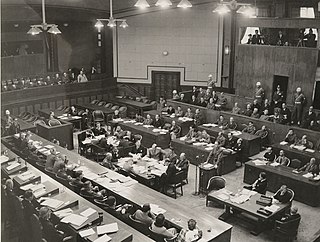 The International Military Tribunal for the Far East (IMTFE), also known as the Tokyo Trial or the Tokyo War Crimes Tribunal, was a military trial convened on April 29, 1946, to try the leaders of the Empire of Japan for joint conspiracy to start and wage war, conventional war crimes and crimes against humanity.

Otozō Yamada was a career officer and general in the Imperial Japanese Army, serving from the Russo-Japanese War to the end of World War II.

Unit 100 was an Imperial Japanese Army facility called the Kwantung Army Warhorse Disease Prevention Shop that focused on the development of biological weapons during World War II. It was operated by the Kempeitai, the Japanese military police. Its headquarters was located in Mokotan, Manchukuo, a village just south of the city of Changchun. It had branches in Dairen and Hailar. The Hailar branch was later transferred to Foshan. Between 600 and 800 people worked at Unit 100.

Zhongma Fortress — also Zhong Ma Prison Camp or Unit Tōgō — was a prison camp where the Japanese Kwantung Army carried out covert biological warfare research on human test subjects. Built in Beiyinhe, outside of Harbin, Manchukuo during the Second Sino-Japanese War, the camp served as a center for human subject experimentation and could hold up to 1,000 prisoners at any given time. In 1937 the prison camp was destroyed and testing operations were transferred to Pingfang under Unit 731. 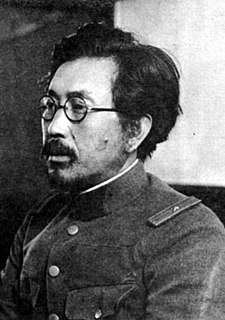 Surgeon General Shirō Ishii was a Japanese microbiologist, army medical officer and a war criminal who was granted immunity by the USA after serving as the director of Unit 731, a biological warfare unit of the Imperial Japanese Army. 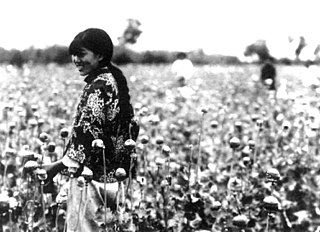 The Kaimingjie germ weapon attack was a Japanese biological warfare bacterial germ strike against Kaimingjie, an area of the port of Ningbo in the Chinese province of Zhejiang in October 1940, during the Second Sino-Japanese War. 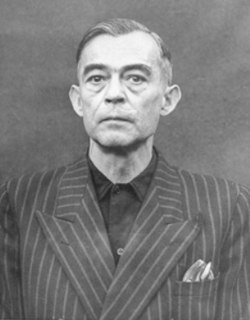 Kurt Blome was a high-ranking Nazi scientist before and during World War II. He was the Deputy Reich Health Leader (Reichsgesundheitsführer) and Plenipotentiary for Cancer Research in the Reich Research Council. In his autobiography Arzt im Kampf, he equated medical and military power in their battle for life and death.

Unit Ei 1644 — also known as Unit 1644, Detachment Ei 1644, Detachment Ei, Detachment Tama, The Nanking Detachment, or simply Unit Ei, was a Japanese laboratory and biological warfare facility under control of the Epidemic Prevention and Water Purification Department. It was established in 1939 in Japanese-occupied Nanking as a satellite unit of Unit 731. It had 12 branches and employed about 1,500 men. 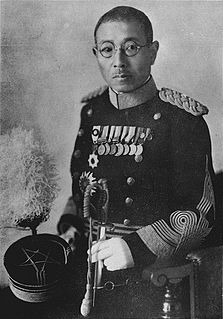 Unit 8604, also known as Detachment 8604, Detachment Nami or Detachment Nami 8604, was the Epidemic Prevention and Water Purification Department unit of the Japanese Southern China Area Army. It allegedly secretly researched biological warfare and other topics through human experimentation during the Second Sino-Japanese War (1937–1945) and World War II era. It was formed in Guangzhou in 1939, and headquartered at Sun Yat-sen University of Medical Sciences.

John William Powell was a journalist and small business proprietor who was most well known for being tried for sedition after publishing an article in 1952 that reported on allegations made by Mainland Chinese officials that the United States and Japan were carrying out germ warfare in the Korean War. This news was reported in Shanghai in an English language journal, the "China Monthly Review", published by Powell.

The Epidemic Prevention and Water Purification Department was a department of the Imperial Japanese Army from 1936 to the dissolution of the Army in 1945. While its public mission was to prevent the spread of disease and monitor water supply, several field armies also assigned units the mission of manufacturing biological weapons. Many units also performed human experimentation.

Shunji Satō was a Japanese physician during the first half of the 20th century and a major general in the Imperial Japanese Army.

Various types of biological warfare (BW) have been practiced repeatedly throughout history. This has included the use of biological agents as well as the biotoxins, including venoms, derived from them.