Khalifa bin Zayed bin Sultan Al Nahyan (Arabic : خليفة بن زايد بن سلطان آل نهيان‎; born 7 September 1948; referred to as Sheikh Khalifa) is the current President of the United Arab Emirates, the Emir of Abu Dhabi, the Supreme Commander of the United Arab Emirates Armed Forces [2] and the chairman of the Supreme Petroleum Council. Sheikh Khalifa is also chairman of Abu Dhabi Investment Authority, which manages $875 billion in assets, the largest amount managed by a nation's head of state in the world. [3] Collectively, the Al Nahyan family is believed to hold a fortune of $150 billion. [4]

Sheikh Khalifa succeeded his father, Zayed bin Sultan Al Nahyan, as Emir of Abu Dhabi on 2 November 2004 and became the President of the UAE the next day. As Crown Prince, he had already de facto carried out some aspects of the presidency since the late 1990s while his father was facing health problems.[ citation needed ]

In January 2014, Khalifa suffered a stroke but was in a stable condition. [5] He has since assumed a lower profile in state affairs, but retained presidential powers. His half brother Sheikh Mohammed bin Zayed Al Nahyan now carries out public affairs of the state and day-to-day decision-making of the Emirate of Abu Dhabi. [6]

Khalifa was born on 7 September 1948 at Qasr Al-Muwaiji, Al Ain, in Abu Dhabi (then part of the Trucial States), the eldest son of Zayed bin Sultan Al Nahyan, the Emir of Abu Dhabi, and Hassa bint Mohammed bin Khalifa Al Nahyan. [7] [8] He is a graduate of the Royal Military Academy Sandhurst.[ citation needed ]

On 1 February 1969, Khalifa was nominated the Crown Prince of Abu Dhabi, and on the next day he was appointed Head of the Abu Dhabi Department of Defense. In that post, he oversaw the build up of the Abu Dhabi Defense Force, which after 1971 became the core of the UAE Armed Forces.

In May 1976, he became deputy commander of the UAE Armed Forces, under the President. He also became the head of the Supreme Petroleum Council in the late 1980s, and continues in this position today, which grants him wide powers in energy matters. He was also the chairman of the Environmental Research and Wildlife Development Agency.

He succeeded to the posts of Emir of Abu Dhabi and President of the United Arab Emirates (UAE) on 3 November 2004, replacing his father Zayed bin Sultan Al Nahyan, who had died the day before. He had been acting president since his father became ill prior to his passing. [ citation needed ]

On 1 December 2005, the President announced that half of the members of the Federal National Council (FNC), an assembly that advises the president, would be indirectly elected. However, half of the council's members would still need to be appointed by the leaders of the emirates. The elections were set to take place in December 2006.

In 2010, Khalifa was described in a WikiLeaks cable signed by then U.S. ambassador Richard G. Olson as a "distant and uncharismatic personage." [10] On 4 January 2010, the world's tallest man-made structure, originally known as Burj Dubai, was renamed the Burj Khalifa in his honor. [11]

In March 2011, Khalifa sent the United Arab Emirates Air Force to support the military intervention in Libya against Muammar Gaddafi, alongside forces from NATO, Qatar, Sweden and Jordan. [12] [13]

Khalifa pledged the full support of the UAE to the Bahraini regime in the face of pro-democracy uprising in 2011. [14]

In Fall 2011, the Emirates initiated a program to promote "allegiance" to Khalifa and other Emirati leaders. [18] The program continues, and encourages not only Emirati nationals, but residents from any nationality to register their "appreciation, recognition, and loyalty" to the Emirs. [19]

In January 2014, Khalifa suffered a stroke and was reported to have been in a stable condition after undergoing an operation. [20]

Khalifa paid $500,000 for the 29.8-acre site of his palace in 2005, according to the sales document. A Seychelles planning authority initially rejected the palace's building plans, a decision overturned by President James Michel's cabinet. [21] A month after the start of construction of the palace, the national utility company warned that the site's plans posed threats to the water supply. Joel Morgan, the Seychelles' minister of the environment, said the government did not tender the land because it wanted it to go to Khalifa. Morgan said "the letter of the law" might not have been followed in the land sale. [21] In February 2010, the sewage system set up by Ascon, the company building the palace, for the site's construction workers overflowed, sending rivers of waste through the region, which are home to more than 8000 residents. [21] Local government agencies and officials from Khalifa's office responded quickly to the problem, sending in technical experts and engineers. Government officials concluded that Ascon ignored health and building codes for their workers, and fined the company $81,000. Ascon blamed the incident on "unpredicted weather conditions". [21] Khalifa's presidential office offered to pay $15 million to replace the water-piping system for the mountainside., and Seychelles' government representatives and residents say Ascon has offered to pay roughly $8,000 to each of the 360 households that were affected by the pollution. [21]

In April 2016, Khalifa was named in the Panama Papers by [22] the International Consortium of Investigative Journalists; he reportedly owns luxury properties in London worth more than $1.7 billion via shell companies that Mossack Fonseca set up and administers for him in the British Virgin Islands. [23]

The Abu Dhabi Investment Authority (ADIA) is a sovereign wealth fund owned by the Emirate of Abu Dhabi founded for the purpose of investing funds on behalf of the Government of the Emirate of Abu Dhabi. It manages the Emirate's excess oil reserves, estimated to be as much as $875 billion. Its portfolio grows at an annual rate of about 10% compounded. The fund is a member of the International Forum of Sovereign Wealth Funds and is therefore signed up to the Santiago Principles on best practice in managing sovereign wealth funds. 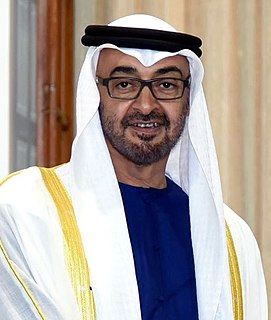 Sheikh Mohammed bin Zayed Al Nahyan, colloquially known by his initials as MbZ, is the Crown Prince of the Emirate of Abu Dhabi and Deputy Supreme Commander of the United Arab Emirates Armed Forces. He is seen as the driving force behind the UAE's activist foreign policy and is a leader of a campaign against Islamist movements in Arabia. Due to the ill health of the UAE president Sheikh Khalifa bin Zayed, Mohammed bin Zayed was entrusted with most day-to-day decision making of the emirate of Abu Dhabi as the crown prince of Abu Dhabi and most of the presidential public affairs of the state and hence, he is sometimes considered as the UAE's de facto ruler. In 2019, the New York Times named him as the most powerful Arab ruler. In 2020, the New York Times called him "one of the most powerful men on Earth." He was also named as one of the '100 Most Influential People' of 2019 by Time magazine.

The President of the United Arab Emirates, or the Raʾīs, is the head of state of the United Arab Emirates. The President and Vice-President are elected every 5 years by the Federal Supreme Council; while the Prime Minister is formally appointed by the President, every UAE Vice-President simultaneously serves as Prime Minister as well. Usually, a sheikh from the Emirate of Abu Dhabi holds the presidency, and a sheikh from the Emirate of Dubai the premiership. Sheikh Zayed bin Sultan Al Nahyan is the UAE's founding father and widely accredited for unifying the seven emirates into one country. He was the UAE's first President, from the nation's founding until his death on 2 November 2004. On the following day the Federal Supreme Council elected his son, Sheikh Khalifa bin Zayed Al Nahyan, to the post. The President is also the Commander-in-Chief of the UAE Armed Forces. 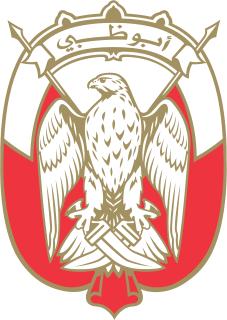 Al Nahyan are one of the six ruling families of the United Arab Emirates, and are based in the capital Abu Dhabi, United Arab Emirates. Al Nahyan is a branch of the House of Al Falahi, a branch of the Bani Yas tribe, and are related to the House of Al Falasi and also related to Bani Yas House of Al-Yassi, these two powerful houses/tribes are from which the ruling the family of Dubai, Al Maktoum, descends. Al Nahyans came to Abu Dhabi in the 18th century and hail from Liwa Oasis. They have ruled Abu Dhabi since 1793, and previously ruled for centuries in Liwa Oasis. Five of the rulers who ruled from the late 1800s to early 1900s killed one another; they were brothers.

Zayed bin Sultan Al Nahyan (1918–2004) was the Emir and the founding father of the United Arab Emirates. 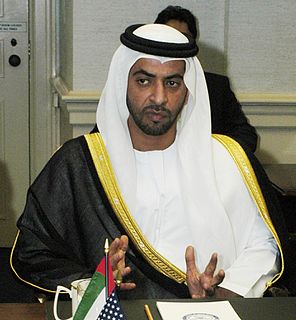 Hamdan bin Zayed bin Sultan Al Nahyan is an Emirati politician and royalty. He is the current ruler (emir)'s representative in the western region of Abu Dhabi or the mayor of the region.

The Supreme Petroleum Council is the highest governing body of oil, gas and similar industry related activities in the Abu Dhabi. The Council was formed in 1988. The Council is tasked with supervising all oil and gas companies that operate in Abu Dhabi and the United Arab Emirates. The Council also acts as the board of directors for the Abu Dhabi National Oil Company. 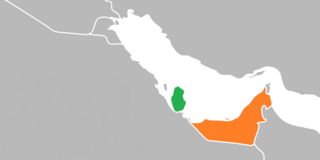 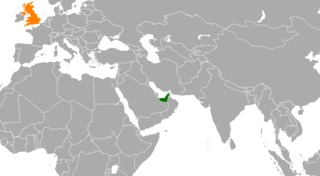 United Arab Emirates–United Kingdom relations are the relations between the United Arab Emirates and the United Kingdom of Great Britain and Northern Ireland. The UAE has an embassy in London while the UK maintains an embassy in Abu Dhabi and is unique in having another Embassy in Dubai, albeit with Her Britannic Majesty's Consul-General to Dubai and the Northern Emirates, as opposed to a separate British Ambassador. The UAE-UK relations have been described as a "special relationship".

The United Arab Emirates consists of seven Emirates, and has six royal families.