Khash Rod District or Khashrowd (Persian/Pashto: خاشرود), Balochi: خواش‌رود)is a district of Nimruz Province in Afghanistan. It had a population of 35,381 in 2004, which was 55% ethnic Pashtun, 20% Baloch, 15% Brahui and 10% Tajik. [1] The district capital is Khash.

Khash may refer to:

Khash District is one of the 28 districts of Badakhshan Province, Afghanistan. It was created in 2005 from part of Jurm District and is home to approximately 43,306 residents, making it the third most populous district of the province. 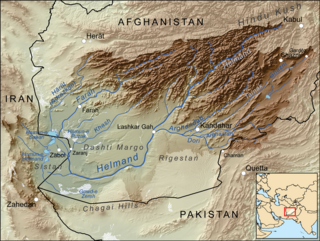 Dasht-e Margo, also Dasht-e Mārgow or Dasht-e Margoh, is a desert region in the southern provinces of Helmand and Nimruz in Afghanistan. The desert is adjacent to the Dasht-e Khash and Registan Desert. It is the world's 20th largest desert at about 150,000 km2 in area with an elevation of 500–700 m. The desert consists mainly of sand masses and rocky-clayish plains with solonchaks, takirs, and rarely oases.

Khash Darreh is the name of two villages in Badakhshan Province in north-eastern Afghanistan. 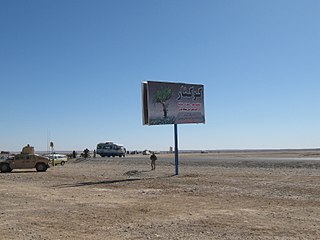 Kayadibi is a village in the District of Feke, Adana Province, Turkey.

Taftan-e Jonubi Rural District is a rural district (dehestan) in Nukabad District, Khash County, Sistan and Baluchestan Province, Iran. At the 2006 census, its population was 9,351, in 1,974 families. The rural district has 62 villages.

Chah-e Shur is a village in Eskelabad Rural District, Nukabad District, Khash County, Sistan and Baluchestan Province, Iran. At the 2006 census, its population was 62, in 10 families.

The Dasht-e Khash, also Dasht-e Khash or Dasht-e Khāsh. is a desert in Afghanistan's Nimruz Province. The desert is adjacent to the Dasht-e Margo. It is located at 620 m above sea level.