The Kheshgi Tribe is divided into the following sub-tribes: [5] [6]

Even in the 19th-century during the British administration of India, Kheshgi tribesmen were found in Kasur District scattered about the region and they call Kasuri Pathan. A more recent article also states that over the past few hundred years they have dispersed throughout South Asia, including the following places: [7]

Several British accounts state that the Kheshgi residing in Kasur hold pigeons in high esteem, for according to some Muslims they are a "Sayyid among birds", and killing them is hence forbidden. [9] [10]

Kasur is a city to south of Lahore, in the Pakistani province of Punjab. The city serves as the headquarters of Kasur District. Kasur is the 24th largest city of Pakistan by population. It is also known for being the burial place of the 17th-century Sufi-poet Bulleh Shah. It is farther west of the border with neighbouring India, and bordered to Lahore, Sheikhupura, and the Okara District of Punjab Province. The city is an aggregation of 26 fortified hamlets overlooking the alluvial valleys of the Beas and Sutlej rivers.

Ahmed Raza Khan Kasuri Kheshgi is a Pakistani politician and lawyer. He is the son of Nawab Muhammad Ahmed Khan Kasuri who was assassinated in a car ambush in 1974.

Masoud Azizi is an Afghan athlete. His personal best time in the 100m sprint is 11.11 seconds, achieved in April 2005 in Mecca. In 2013 Azizi failed a doping test at the 2013 World championships, and was suspended for two years.

Umerzai is a town and union council in Charsadda District of Khyber-Pakhtunkhwa. The principal inhabitants of the town are the Umerzai tribe, sub-tribe of the prominent Kheshgi Pashtuns. 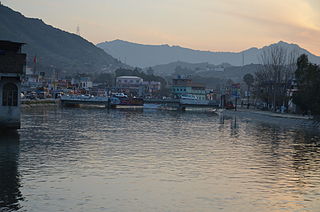 Batkhela is the main tehsil, city and capital of Malakand District, Khyber Pakhtunkhwa, Pakistan. According to the 6th Population & Housing Census - 2017 Census of Pakistan, the population of Batkhela was recorded 68,200. Batkhela is a popular business city in Khyber Pakhtunkhwa province. One water canal that pours into a small dam in Jabban area is main source of electricity production.

Mohammad Iqbal Azizi is an ethnic Pashtun politician in Afghanistan, who served as Governor of Laghman from March 2010 to September 2012. He previously served as head of the Education Department in Nangarhar Province.

Asma Mamdot is a Pakistani politician who had been a member of the National Assembly of Pakistan, from June 2013 to May 2018.

Farida Azizi is an Afghan advocate for peace and women's rights. Azizi has consulted with President George W. Bush and Hillary Clinton on women's roles in helping to rebuild Afghanistan. Azizi is a founding member of the Corporation for Peace and Unity in Afghanistan and is a member of the Afghan Women's Network. She one of the subjects of a play, Seven.

The Nawab of Mamdot was the title of the hereditary rulers of Mamdot, a princely state in the Punjab region of British India.