The khepesh (ḫpš) is an Egyptian sickle-shaped sword that evolved from battle axes. [1] [2]

A typical khepesh is 50–60 cm (20–24 inches) in length, though smaller examples also exist. The inside curve of the weapon could be used to trap an opponent's arm, or to pull an opponent's shield out of the way. These weapons changed from bronze to iron in the New Kingdom period. [3] The earliest known depiction of a khopesh is from the Stele of Vultures, depicting King Eannatum of Lagash wielding the weapon; this would date the khopesh to at least 2500 BC. [4]

The word khepesh may have been derived from "leg", as in "leg of beef", because of their similarity in shape. The hieroglyph for ḫpš ('leg') is found as early as during the time of the Coffin Texts (the First Intermediate Period). [5]

The blade is only sharpened on the outside portion of the curved end. The khepesh evolved from the epsilon or similar crescent-shaped axes that were used in warfare. [1] The khepesh fell out of use around 1300 BC. However, in the 196 BC Rosetta Stone, it is referenced as the "sword" determinative in a hieroglyphic block, with the spelled letters of kh, p, and sh to say:

Shall be set up a statue..., the Avenger of Baq-t-(Egypt), the interpretation whereof is 'Ptolemy, the strong one of Kam-t'-(Egypt), and a statue of the god of the city, giving to him a sword royal of victory, ... [6]

Various pharaohs are depicted with a khopesh, and some have been found in royal graves, such as the two examples found with Tutankhamun. [4]

Although some examples have clearly sharpened edges, many examples have dull edges that apparently were never intended to be sharp. It may therefore be possible that some khopeshes found in high-status graves were ceremonial variants. [4] 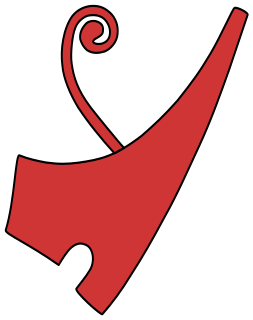 The Raphia Decree is an ancient inscribed stone stela dating from ancient Egypt. It comprises the second of the Ptolemaic Decrees issued by a synod of Egyptian priests meeting at Memphis under Ptolemy IV of the Hellenistic Ptolemaic dynasty, which ruled Egypt from 305 BC to 30 BC. The slab dates itself to 217 BC, and celebrates Ptolemy IV's victory at the Battle of Raphia.

The ancient Egyptian Harpoon,, is one of the oldest language hieroglyphs from ancient Egypt. It is used on the famous Narmer Palette of Pharaoh Narmer from the 31st century BC, in an archaic hieroglyphic form. 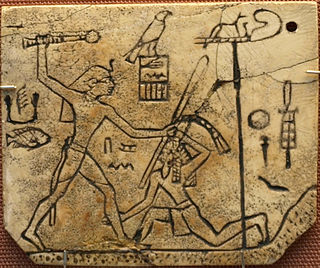 The ancient Egyptian Mast hieroglyph is one of the oldest language hieroglyphs from Ancient Egypt. It is used on a famous label of Pharaoh Den of the First dynasty, but forms part of the location hieroglyph: Emblem of the East.

The ancient Egyptian horizontally-outstretchedArm with powerstick is a hieroglyph with the meaning of "force", or "power of action". As a baton, or macehead. Power is obvious, but the origins may have also had references to magic, or the idea of driving-off bad spirits or omens.

The Walking Legs-forward is an ancient Egyptian language hieroglyph of the concept of action, part of "going and returning". Walking Legs-returning is the other half.

The ancient Egyptian Hand hieroglyph is an alphabetic hieroglyph with the meaning of "d"; it is also used in the word for 'hand', and actions that are performed, i.e. by the 'way of one's hands', or actions.

The Foreleg of ox hieroglyph of ancient Egypt is an old hieroglyph; it even represented a nighttime constellation. It came to have many uses in ancient Egypt over three millennia.

The Throw stick hieroglyph of ancient Egypt is an old hieroglyph that dates from the Predynastic Period; it is from the assemblage of hieroglyphs used on the ornamental, or ceremonial cosmetic palettes. It is used on the palettes both as a throwing-stick weapon in the animal hunt being portrayed-(the Hunters Palette), as well as on certain palettes, as a determinative referring to a "foreigner", or "foreign territory".

The ancient Egyptian Papyrus stem hieroglyph is one of the oldest language hieroglyphs from Ancient Egypt. The papyrus stalk, was incorporated into designs of columns on buildings, also facades, and is also in the iconographic art portrayed in ancient Egyptian decorated scenes.

The ancient Egyptian Bone-with-meat hieroglyph represented: "ancestry, inherit", and phonetic isw, iw' ; a determinative for the femur, (iw'); and swt, for the tibia.

The ancient Egyptian child hieroglyph is part of the Egyptian Gardiner's Sign List hieroglyphs for the beginning core subgroup of Man and his Occupations. It relates to the child, and childhood, and has a version for the Pharaoh, as a child.

The Ancient Egyptian Swallow hieroglyph is Gardiner sign listed no. G36 for swallow birds. The Sparrow hieroglyph appears similar in size and shape, but it is used to represent small, or bad items.

The ancient Egyptian Grape arbor hieroglyph is Gardiner sign listed no. M43 in Gardiner's subcategory for trees and plants. The hieroglyph shows a horizontal vine with stylized bunches suspended below; each end is supported by the hieroglyph for a "prop", Gardiner no. O30,

The ancient Egyptian Two Whips with Shen ring hieroglyph, Gardiner sign listed no. S23 is a portrayal of the Shen ring with two Egyptian flails-(Crook and flail); it is a member of the Gardiner subset for "crowns, dress, staves, etc".

The Egyptian hieroglyph ndj (nḏ) has the shape of a cross. It presumably depicts some type of tool such as a mill. It is often written alongside the nu "pot" hieroglyph (W24). It is used as an ideogram or determinative in the context of "grains", "grinding stone", "grind", "to rub out". 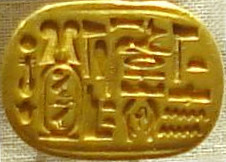