He was born in Kerman, Iran on 24 December 1290. His nickname Khwaju is a diminutive of the Persian word Khwaja which he uses as his poetic penname. [1] This title points to descent from a family of high social status. [1] The nisba (name title) Morshedi display his association with the Persian Sufi master Shaykh Abu Eshaq Kazeruni, the founder of the Morshediyya order. [1] Khwaju died around 1349 in Shiraz, Iran, and his tomb in Shiraz is a popular tourist attraction today. When he was young, he visited Egypt, Syria, Jerusalem and Iraq. He also performed the Hajj in Mecca. One purpose of his travel is said to have been education and meeting with scholars of other lands. He composed one of his best known works Homāy o Homāyun in Baghdad. Returning to Iranian lands in 1335, he strove to find a position as a court poet by dedicating poems to the rulers of his time, such as the Il-Khanid rulers Abu Sa'id Bahadur Khan and Arpa Ke'un, the Mozaffarid Mubariz al-Din Muhammad, and Abu Ishaq Inju of the Inju dynasty. [1] 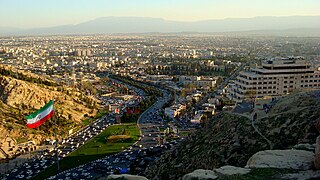 Shiraz is the fifth-most-populous city of Iran and the capital of Fars Province, which is also known as Pars and Persis (Persia). At the 2016 census, the population of the city was 1,869,001 and its built-up area with "Shahr-e Jadid-e Sadra" was home to 1,565,572 inhabitants. Shiraz is located in the southwest of Iran on the "Rudkhaneye Khoshk" seasonal river. It has a moderate climate and has been a regional trade center for over a thousand years. Shiraz is one of the oldest cities of ancient Persia.

Xāja Shams-ud-Dīn Moḥammad Ḥāfeẓ-e Shīrāzī, known by his pen name Hafez and as "Hafiz", was a Persian poet, whose collected works are regarded by many Iranians as a pinnacle of Persian literature. His works are often found in the homes of people in the Persian-speaking world, who learn his poems by heart and use them as everyday proverbs and sayings. His life and poems have become the subjects of much analysis, commentary and interpretation, influencing post-14th century Persian writing more than any other Persian author.

Abū Ḥamīd bin Abū Bakr Ibrāhīm, better known by his pen-names Farīd ud-Dīn and ʿAṭṭār of Nishapur, was a Persian poet, theoretician of Sufism, and hagiographer from Nishapur who had an immense and lasting influence on Persian poetry and Sufism. He wrote a collection of lyrical poems and number of long poems in the philosophical tradition of Islamic mysticism, as well as a prose work with biographies and sayings of famous Muslim mystics. Manṭiq-uṭ-Ṭayr [The Conference of the Birds] and Ilāhī-Nāma [The Book of Divine] are among his most famous works. 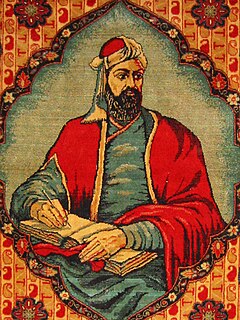 Nizami Ganjavi, Nizami Ganje'i, Nizami, or Nezāmi, whose formal name was Jamal ad-Dīn Abū Muḥammad Ilyās ibn-Yūsuf ibn-Zakkī, was a 12th-century Persian Sunni Muslim poet. Nezāmi is considered the greatest romantic epic poet in Persian literature, who brought a colloquial and realistic style to the Persian epic. His heritage is widely appreciated and shared by Afghanistan, Azerbaijan, Iran, the Kurdistan region and Tajikistan. 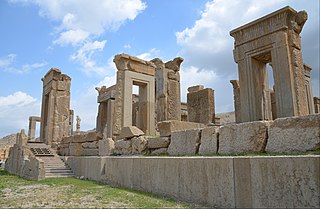 Fars Province, also known as Pars as well as Persis and Persia, is one of the thirty-one provinces of Iran. With an area of 122,400 km², it is located in Iran's southwest, in Region 2, and its administrative center is Shiraz. As of 2011, Fars had a population of 4.6 million people, of which 67.6% were registered as urban dwellers (urban/suburbs), 32.1% villagers, and 0.3% nomad tribes. 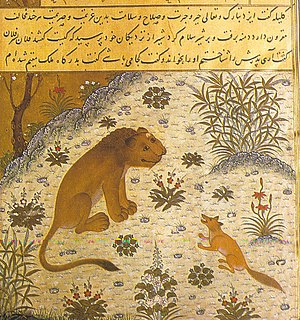 Persian literature comprises oral compositions and written texts in the Persian language and is one of the world's oldest literatures. It spans over two-and-a-half millennia. Its sources have been within Greater Iran including present-day Iran, Iraq, Afghanistan, the Caucasus, and Turkey, regions of Central Asia and South Asia where the Persian language has historically been either the native or official language. For example, Rumi, one of the best-loved Persian poets, born in Balkh or Wakhsh, wrote in Persian and lived in Konya, at that time the capital of the Seljuks in Anatolia. The Ghaznavids conquered large territories in Central and South Asia and adopted Persian as their court language. There is thus Persian literature from Iran, Mesopotamia, Azerbaijan, the wider Caucasus, Turkey, Pakistan, Bangladesh, India, Tajikistan and other parts of Central Asia. Not all Persian literature is written in Persian, as some consider works written by ethnic Persians or Iranians in other languages, such as Greek and Arabic, to be included. At the same time, not all literature written in Persian is written by ethnic Persians or Iranians, as Turkic, Caucasian, and Indic poets and writers have also used the Persian language in the environment of Persianate cultures.

A Persianate society is a society that is based on or strongly influenced by the Persian language, culture, literature, art and/or identity.

Khwajeh Nizam al-Din Ubayd Allah al-Zakani, better known as Ubayd Zakani was a Persian poet of the Mongol era, regarded as one of the best satirists in Persian literature. His most famous work is Mush-o Gorbeh, a political satire, which attacks religious hypocrisy. Although a highly popular figure, Ubayd's work has received little attention until recently, due to provoking and bawdy texts in the majority of his works. He has been compared to the French Enlightenment writer Voltaire.

Abu'l-Hasan Ali ibn Julugh Farrukhi Sistani, better known as Farrukhi Sistani was one of the most prominent Persian court poets in the history of Persian literature. Initially serving a dehqan in Sistan and the Muhtajids in Chaghaniyan, Farrukhi entered the service of the Ghaznavids in 1017, where he became the panegyrist of its rulers, Mahmud and Mas'ud I, as well as numerous viziers and princes. 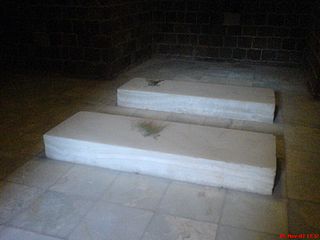 Saib Tabrizi, was a Persian poet and one of the greatest masters of a form of classical Arabic and Persian lyric poetry characterized by rhymed couplets, known as the ghazal. Besides writing in Persian, Saib was known to have written 17 ghazals and molammaʿs in Azerbaijani Turkic.

The Darab-Naameh is a Persian prose romance, written by the 12th-century writer Abu Taher Muhammad, in which the adventures of the Kayanid Iranian King Darab are recounted. 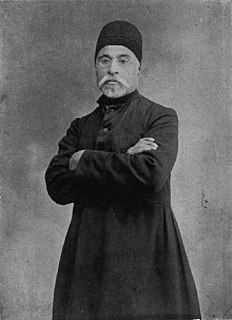 Hajji Lotf-Ali Beg Azar Bigdeli, better known as Azar Bigdeli, was an Iranian anthologist and poet. He is principally known for his biographical anthology, the Atashkadeh-ye Azar, which he dedicated to Iranian ruler Karim Khan Zand. Written in Persian, it is considered "the most important Persian anthology of the eighteenth century". Azar was a leading figure of the bazgasht-e adabi movement.

Roknābād or Ruknābād is the name of a district on the north-east side of Shiraz, watered by a man-made stream of the same name. It was made famous in English literature in the translations of the 14th-century poet Hafez made among others by Gertrude Bell, who wrote (1897):

Shirazi Turk is a ghazal by the 14th-century Persian poet Hāfez of Shiraz. It has been described as "the most familiar of Hafez's poems in the English-speaking world". It was the first poem of Hafez to appear in English, when William Jones made his paraphrase "A Persian Song" in 1771, based on a Latin version supplied by his friend Károly Reviczky. Edward Granville Browne wrote of this poem: "I cannot find so many English verse-renderings of any other of the odes of Ḥáfiẓ." It is the third poem in the collection of Hafez's poems, which are arranged alphabetically by their rhymes.

Jahan Malek Khatun was an Injuid princess and a poetess, contemporary of Hafez. She wrote under pen name Jahan. 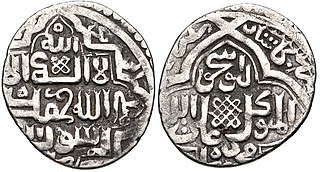 Abu Ishaq Inju was the last Injuid ruler from 1343 to 1357. During his reign the city of Shiraz flourished, consisting of prominent figures such as Hafez, Khwaju Kermani and Ubayd Zakani. In 1357, the Muzaffarid ruler Mubariz al-Din Muhammad captured Shiraz, and had Abu Ishaq Inju executed.