Kidangannoor is a town in the extreme west end of Pathanamthitta district in the state of Kerala, India. [1] It is on the route between Aranmula (famous for its boat races) and Pandalam. It is well connected to various places such as Thiruvalla(20 km),[Chengannur]] (9.5 km), Pandalam (9.5 km), Aranmula (4 km), Kozhencherry (8 km), Pathanamthitta (18 km) by different roads. It is one of the fastest-growing villages in Kerala. It is about 2 km from the border of Pathanamthitta & Alappuzha districts( Elimukku junction). It is about 4.5 km east of Mulakkuzha from MC road.

As of the2001 [update] India census, Kidangannur had a population of 16,364 with 7,665 males and 8,699 females. [1] There have been many NRI (Non-resident Indian and person of Indian origin) resulting in not only improved quality of life and rise of money in many households but has left some elderly people alone and resulted in a decline in workers.

Kidangannoor is located at Thiruvabharana Patha of Lord Ayyappan. It is 4 km away from Aranmula. Pallimukathu Devi Temple is at Kidangannoor. It is the birthplace of the father of modern Malayalam, Rev. George Mathan. Mathan wrote the first grammar book in Malayalam called "Malayanmayude Vyakaranam" and other books like "Satyavadakhedam", "Marumakkathaya Sampradayam" and many others. He did most of his writing in his ancestral house in Kidangannoor, although he spent most of his life in Mallapally and Kottayam. He worked tirelessly with Rev.Hermann Gundert and other priests to save Malayalam from the onslaught of Tamil, which was the official language in Kerala at that time.

Matt Matthews, a writer, publisher, poet and editor is also from Kidangannoor. He hails from George Mathen’s family. Matt is an editor of a number of international research journals including Gulf Agriculture magazine, Food Business Gulf & Middle East, Livestock and Poultry Business Middle East, Travel Business Middle East. He is regularly hosted by many trade agencies around the globe especially related to agriculture and food sectors. He was honored by former Indian agriculture minister Mr Shard Pawar in 2005 for his great contributions to the Indian and global agriculture sectors.

Kidangannur Prasad, a poet and cartoonist has worked as a cartoonist in UNMA magazine . Cheriyan.M.Thomas known as Cheriyan Kidangannur (ചെറിയാൻ കിടങ്ങന്നൂർ) who is working as a journalist in Mangalam Daily Newspaper . He is also working as a PRO in Malayalam Film.

Ronnie Matthew Manappallil, an internationally collaborating Rock/Jazz musician, multi-instrumentalist & music producer is a native of Kidangannoor. [3] He is also an avid collector of the rarest Araceae, Marantaceae & Araliaceae.

The village's other attractions are proximity to Aranmula(4 km) and Sabarimala(85 km) (both holy places of pilgrimage and worship for Hindus), the Syrian Christian Orthodox Pilgrimage Center and Church, nearby Mezhuveli, a local market, schools, etc. Syrian St.Mathias CSI Church Kidangannur is situated nearby and is the only church that has relatives of Rev. George Mathan and the puliyelil family as its members. There is a Mar Thoma Church near the junction christened as St. Thom Mar Thoma Church, Kidangannur, which falls under the jurisdiction of Chengannur- Mavelikara Diocese of Mar Thoma Church. A dedication center called Navdarshan is also run by the diocese. St. George Salem Jacobite Syrian Church is also located in Mezhuveli.

The village used to grow many crops, but since the late 1900s there have been mostly rubber farms with only small gardens and areas growing other crops. The village was also affected by 2018 Kerala Floods.

Mallappally is a taluk in Kerala state in India. It is one of the five taluks that make up the Pathanamthitta district. Historically a part of the kingdom of Travancore and Cochin. Called "Land of the BA graduates" due to English education imparted by attendants of CMS College Kottayam in the 19th century, Mallappally is the original home of many Non-resident Indians, and has one of the lowest population growth and highest literacy rates in India.It Comes Under Thiruvalla Revenue Division & Thiruvalla Constituency.It Is Located 18 km From Thiruvalla Railway Station & NH 183 in Thiruvalla .Buses Ply Every 5 minutes From Thiruvalla To Mallappally & Vice Versa. 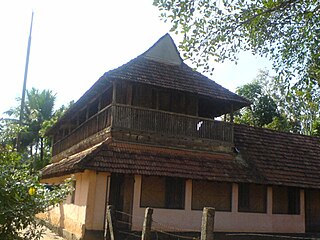 Keekozhur also spelt as Keekozhoor is a small village on the side of Pamba River, situated 4 km from Ranni and 9 km from Kozhencherry. It is in the state of Kerala, India. It is 15 km from the Pathanamthitta district headquarters. This village is under Ranny and Cherukole Panchayats.

Mezhuveli is a village in Kerala, India, situated between the holy rivers of Pamba and Achankovil. It is located 16 kilometers south-west of Pathanamthitta and 12 kilometers east of Chengannur. The Ananda Bhoodeswaram temple in Mezhuveli is dedicated to the Lord Siva. It is famous for the Kettukazhicha during the Utsavam which starts on the Maha Sivarathri every year, linked to the Malayalam calendar. During kettukazhcha, the devotees bring different kinds of idol to the temple. Mezhuveli is also famous for the Padmanabhodayam Higher Secondary School, with a heritage of more than 80 years. Half a kilometer south-west of Mezhuveli is Pottan Mala, which was named in respect to the Appooppan, who once lived there. The Pottan mala Appoppan Devasthanam temple in dedication to the Appoppan is situated at the top. Everyday people worship inside and outside by lighting candles and lamps. 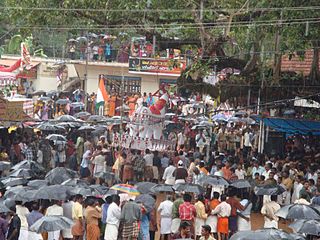 Othara or Othera is an Indian village in Kerala state. It is located in Taluk Tiruvalla, in Pathanamthitta district.It Is Part Of Thiruvalla Sub-District & Thiruvalla Constituency.

Keezhukara, a small village in Pathanamthitta district, is about 135 km from Thiruvanandapuram, capital city of Kerala, India. It is on latitude 9.349 N and longitude 76.705 E. Pampa River is on the north and west. Kozhencherry is in the south and Melukara in the east. The Interior is hilly but the riverine land is flat, fertile and arable. The population of Keezhukara in 2008 was 1211 in 292 households.

Thekkemala is a small sub-village of Kozhencherry in Pathanamthitta district, Kerala, India.