Kilmore ( /ˈkɪlmɔːr/ ) [2] is a town in the Australian state of Victoria. Located 60 kilometres (37 mi) north of Melbourne, it is the oldest inland town in Victoria by the combination of age and physical occupation, and because it had unique agricultural attributes to drive that earliest settlement. It grew very rapidly to become four times bigger than its nearest inland rival by 1851. Its spectacular growth continued to match that of the major gold mining towns of Ballarat, Bendigo and Beechworth until at least 1861. [3]

The traditional owners of Kilmore and the Kilmore Plains are the Taungurong people, a part of the Kulin nation that inhabited a large portion of central Victoria including Port Phillip Bay and its surrounds. The Tommy McRae artwork held by the National Gallery of Australia depicts the "Kilmore Tribe Holding Corobboree", [4] and a child pioneer of Kilmore, James Hamilton, describes in detail just such a corroboree at Kilmore in 1845. [5]

Kilmore was discovered for European use by the famous Overlander and explorer of the Port Phillip District (later Victoria) and South Australia Charles Bonney on about 21 March 1837, at which time he also blazed the track of the Sydney Road to Melbourne. His track formed the main highway between the capital cities for 139 years. Kilmore was settled by Bonney on about 17 June 1837 as a sheep station and he built Bonney's Outstation on the townsite itself. Kilmore would have had its first European building within a couple of days of Bonney's arrival. [6]

Bonney's sheep station was unique because the Kilmore Plains on which it was established were permanently watered by three spring-fed creeks and were highly fertile. Thus they were suited for both grazing and high population small acreage farming. After Bonney left, the station was held successively by Dr Richard Julian Hamlyn, then the partners Frederick Armand Powlett and John Green. [7]

The most productive part of the property was purchased by William Rutledge on 12 April 1841 in a Special Survey of 5120 acres and was progressively leased or subdivided into small holdings for intensive agriculture [8] whereupon it became the agricultural powerhouse of inland Victoria. [9]

The Kilmore Plains had such a concentration of population that in the first Victorian election of 1851 the district controlled two seats. The United Boroughs of Kilmore, Kyneton and Seymour were dominated by Kilmore township, while the United Counties of Talbot, Dalhousie and Anglesea were dominated by the Rutledge Kilmore Special Survey. As a further demonstration of the importance of the district, the first elected representative of the United Counties was John Pascoe Fawkner, the co-founder of Melbourne. [10]

O'Shanassy, an Irish Catholic, was the bane of the Protestant establishment in Melbourne and the ensuing sectarianism also affected those who lived in Kilmore. O'Shanassy's supporters were referred to as 'O'Rowdies' and O'Shanassy as the 'Rowdy King". [11] A Melbourne Punch cartoon "Freedom of Election at Kilmore" depicted the 1859 election day in the town as a wild barney of Irishmen. [12] [13]

Kilmore was a stronghold of early Celtic settlers from Ireland, Scotland and Cornwall, and remains a strong Celtic area to this day. The town hosts a market on the last Saturday of each month, and a Celtic Festival each June.

Kilmore Post Office opened on 1 February 1843 and, with Ovens (later Wangaratta) which opened the same day, were the fifth and sixth to open in the Port Phillip District and the first two inland offices. [14]

Many of Kilmore's oldest extant buildings are made of bluestone including the hospital, old court house, former post office, some churches, a gaol, and a monument to Hume and Hovell near the golf course.

Kilmore is serviced by a V/Line railway station on the Seymour line.

The locality is also serviced by Mitchell Transit - providing a Town Bus route and intra municipal service covering the towns of Wallan, Kilmore, Broadford and Seymour within the Mitchell Shire.

A railway used to ascend from Heathcote Junction on the Sydney–Melbourne line, passed through Kilmore [16] with the main branch running onto Bendigo; while a white elephant branch line ran out to Lancefield until dismantled during 1914. The Bendigo line was truncated to Heathcote in 1958 and closed in 1969 and then dismantled. An operational tram museum utilises part of the old railway right of way between Kilmore and Bylands. [17] Still today, many parts of the track are still in place like the old cobblestone platform of the original railway station. Most of this though has been built over or grown over.

Kilmore is served by a railway station at Kilmore East, on the main line. The Post Office at Kilmore East opened on 1 September 1872 as Gavan Duffy and was renamed Kilmore East two months later and closed in 1976. [14]

Though Kilmore is located relatively close to Melbourne, it still retains the "Township" atmosphere. It is serviced by Melbourne radio and Television, and also offers local media services.

The town has two private secondary schools and two primary schools; Kilmore Primary School, St Patrick's Primary school, Assumption College, and the Kilmore International School. The Kilmore International school (TKIS) is the only school in Australia to exclusively use the International Baccalaureate and not offer a local high school qualification such as the VCE. [18] The Australian Training College is also based in Kilmore and has been operating since 1994 delivering a range of nationally accredited courses including hospitality, management, training and assessment, horticulture to name a few.

Sir John O'Shanassy, KCMG, was an Irish-Australian politician who served as the 2nd Premier of Victoria. O'Shanassy was born near Thurles in County Tipperary, Ireland, the son of a surveyor, and came to the Port Phillip District in 1839. He went into business in Melbourne as a draper, and by 1846 he was rich enough to be elected to the Melbourne City Council and to become the founding chairman of the Colonial Bank of Australasia. By the 1850s he was a major landowner and one of the wealthiest men in the colony. He also became a recognised leader of the large Irish Catholic community.

Heathcote Junction railway station is located on the North East railway line in Victoria, Australia. A station, originally called Kilmore Junction, was opened at the site on 17 March 1890, at the point where the former Heathcote branch left the main line.

Broadford is a small town in central Victoria, Australia. At the 2016 census, Broadford had a population of 4,319. The town is the headquarters of the Shire of Mitchell local government area and is approximately 73 kilometres (50 mi) north of the state capital, Melbourne.

The Deniliquin railway line is a broad-gauge railway line serving northwestern Victoria, Australia. The line runs from the border settlement of Deniliquin into Bendigo, before turning south-southeast towards Melbourne, terminating in Docklands near the central business district. It is a major trunk line both for passenger and freight trains, with many railway lines branching off from it. The line has re-opened and now sees multiple freight trains a year.

Carlsruhe is a small rural town in the Shire of Macedon Ranges between Woodend and Kyneton, alongside the old Calder Highway, although now bypassed by the Calder Freeway. It is approximately 50 minutes from both Melbourne and Bendigo. At the 2011 census, Carlsruhe and the surrounding area had a population of 456. 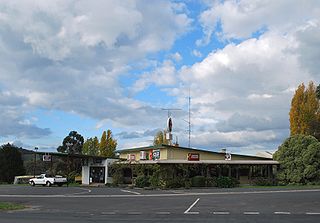 Pyalong is a town in central Victoria, Australia. The town is located on the Northern Highway, in the Shire of Mitchell local government area, 90 kilometres (56 mi) from the state capital, Melbourne. At the 2011 census, Pyalong had a population of 459. In 2016 the population had reached 660. 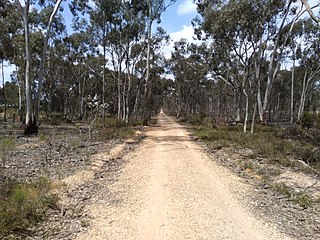 The O'Keefe Rail Trail is a 50-kilometre (31 mi) rail trail connecting Bendigo with Heathcote. The sandy gravel trail runs along a former branch line on the Melbourne-Sydney rail line. It previously ran 17 km (11 mi) from Bendigo to Axedale but works completed in 2015 extended the route to Heathcote

Kilmore East is a locality in the Australian state of Victoria, 65 kilometres north of Melbourne. At the 2016 census, Kilmore East had a population of 417. 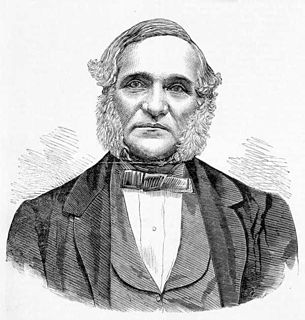 Willowmavin is a locality in central Victoria, Australia. The locality is in the Shire of Mitchell local government area, 73 kilometres (45 mi) north of the state capital, Melbourne. 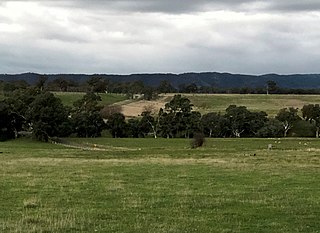