Kinngait (Inuktitut meaning "high mountain" or "where the hills are"; [6] [7] Syllabics: ᑭᙵᐃᑦ), formerly known as Cape Dorset until 27 February 2020, [8] is an Inuit hamlet located on Dorset Island [9] near Foxe Peninsula at the southern tip of Baffin Island in the Qikiqtaaluk Region of Nunavut, Canada.

Kinngait, previously Cape Dorset and Sikusiilaq before that [10] is where the remains of the Thule (Early Inuit) and pre-Inuit Dorset people (Tuniit) were discovered, who lived between 1000 BC and 1100 AD. The European name of Cape Dorset was given by Captain Luke Foxe after Edward Sackville, 4th Earl of Dorset, on 24 September 1631. [11] The Inuit originally called the inlet Sikusiilaq, after the area of sea ocean nearby that remains ice-free all winter. Hudson's Bay Company set up a trading post here in 1913, where they traded furs and skins for supplies such as tobacco, ammunition, flour, gas, tea and sugar. [12]

In December 2019, the residents of Cape Dorset voted in favour of a request to officially rename the hamlet to its Inuktitut name of Kinngait. [13] Voters chose between Kinngait, Sikusiilaq, and the English name of Cape Dorset.

Since the 1950s, Kinngait, which calls itself the "Capital of Inuit Art", has been a centre for drawing, printmaking, and carving. In the 21st century, printmaking and carving continue to be the community's main economic activities. Each year, Kinngait Studios issues an annual print collection. Kinngait has been hailed as the most artistic community in Canada, with some 22% of the labour force employed in the arts. [14]

In 1957, James Archibald Houston created a graphic arts workshop in Kinngait, in a program sponsored by the Department of Northern Affairs and National Resources. It was considered a way for the community to generate income by adapting traditional art forms to contemporary techniques. [15] : 49  Houston collected drawings from community artists and encouraged local Inuit stone carvers to apply their skills to stone-block printing, in order to create art that might be more widely sold and distributed. The print program was modelled after Japanese ukiyo-e workshops. Other cooperative print shops were established in nearby communities, but the Kinngait workshop has remained the most successful. The artists have experimented with etching, engraving, lithography, and silkscreen. They produce annual catalogues advertising the limited edition prints. [15] : 49

Between the years of 1959 and 1974, Kinngait artists produced more than 48,000 prints. Well-known artists of Kinngait include Pitseolak Ashoona, Nuna Parr, Pudlo Pudlat, Angotigolu Teevee, Alashua Aningmiuq, Kiugak Ashoona, Ulayu Pingwartok, Oopik Pitsuilak, Innukjuakju Pudlat, Mary Qayuaryuk, Anirnik Oshuitoq, and Kenojuak Ashevak. Parr's carvings are internationally recognized and his work is exhibited in the National Gallery of Canada. Ashevak's drawings of owls have been chosen to appear on Canadian stamps as well as a Canadian quarter. [16]

A handful of unnamed dirt/gravel roads (unpaved because of winter conditions) cross the village but do not connect beyond Kinngait. Cars and trucks are the main means of transportation and supplemented by snowmobiles and ATVs (all-terrain vehicles) during the winter. The people use boats and ships for seasonal travel to and from Kinngait when the Hudson Strait is ice-free. A taxi company, Tuniit Taxis, offer a range of vehicles.

The area is serviced by the Cape Dorset Airport with connections only within Nunavut. Travel outside Nunavut can be made via connections through Iqaluit Airport. [29]

The only secondary school in town, Peter Pitseolak School (PPS), was destroyed by fire set by three youths in September 2015. [30] In summer 2019, the school opened a printmaking studio workshop space for children, through the Embassy of Imagination program. [31]

The Royal Canadian Mounted Police has a detachment staffed by six officers and sometimes number as many as 10 officers with one sergeant and one corporal.

The Fire Department is staffed by 25 volunteers and a pumper at a single fire hall. There is a lack of fire hydrants in the town, so each run has to be filled up at the water station.

Medical facilities are basic at the Cape Dorset Health Centre. [33] Advanced medical care requires an airlift to the 35-bed Qikiqtani General Hospital in Iqaluit. [34] There is no ambulance in the town. Qualified doctors visit only occasionally. There is a taxi service but it is not consistently reliable.

The community has been served by the Qiniq network since 2005. [35] The Qiniq network is designed and operated by SSi Canada. In 2017, the network was upgraded to 4G LTE technology, and 2G-GSM for mobile voice. [36]

No new family dwellings have been built in more than 10 years, so houses are overcrowded with as many as 17 people living in small quarters.[ citation needed ][ date missing ] Tuberculosis is active in the town. [37] This is made more acutely dangerous as the overcrowding continues. However, the Canadian government plans to build 5 new housing units in the town by late 2022 or early 2023. [38]

The cost of basic food staples like milk, cheese, flour, and butter is 65-75% higher than in Ottawa or Montreal, which has led to high rates of food insecurity in Kinngait, as well as in the rest of Nunavut. [39]

Spanning both Dorset Island and Mallik Island, Mallikjuaq Territorial Park is notable for archaeological sites revealing Thule culture, Dorset culture, and Inuit history. The park is reachable by foot from Kinngait at low tide, or by boat. [40]

A cairn was raised in memory of the ship, RMS Nascopie, a supply ship to the Arctic, that hit a rock and sank in 1947. Although the cargo was lost, the passengers and crew were saved. [41]

In September 2018, the Kenokuak Cultural Centre and Print Shop [42] opened. The centre is named after local artist and Inuit art pioneer Kenojuak Ashevak who died in 2013. The centre serves a community facility, art studio and exhibition space for local artists.

There are outfitters that provide numerous dog sledding, camping, and hiking to parks tours.

Kinngait has a tundra climate (ET) with short but cool summers and long cold winters. [43] 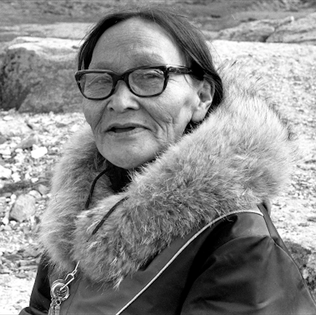 Pitseolak Ashoona was an Inuk Canadian artist admired for her prolific body of work. She was also a member of the Royal Canadian Academy of Arts.

Kenojuak Ashevak,, is celebrated as a leading figure of modern Inuit art. 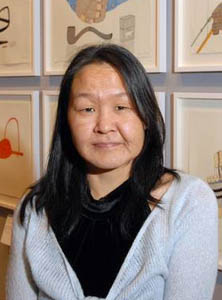 Annie Pootoogook was a Canadian Inuk artist known for her pen and coloured pencil drawings. In her art, Pootoogook often portrayed the experiences of those in her community of Kinngait, in northern Canada, and memories and events from her own life. 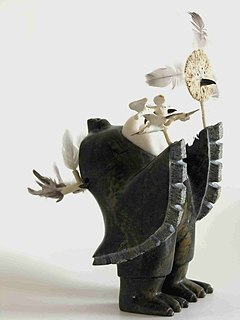 Inuit art, also known as Eskimo art, refers to artwork produced by the Inuit, that is, the people of the Arctic previously known as Eskimos, a term that is now often considered offensive. Historically, their preferred medium was walrus ivory, but since the establishment of southern markets for Inuit art in 1945, prints and figurative works carved in relatively soft stone such as soapstone, serpentinite, or argillite have also become popular.

Pudlo Pudlat (Pudlo), was a Canadian Inuit artist whose preferred medium was a combination of acrylic wash and coloured pencils. His works are in the collections of most Canadian museums. At his death in 1992, Pudlo left a body of work that included more than 4000 drawings and 200 prints.

Kananginak Pootoogook was an Inuk sculptor and printmaker who lived in Cape Dorset, Nunavut, in Canada. He died as a result of complications related to surgery for lung cancer. 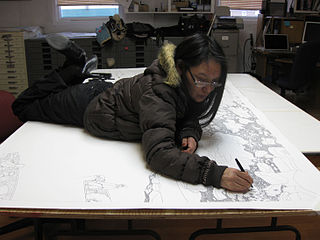 Shuvinai Ashoona is an Inuk artist who works primarily in drawing. She is known for her detailed pen and pencil drawings depicting northern landscapes and contemporary Inuit life.

Pitaloosie Saila was a Canadian Inuk graphic artist who predominantly made drawings and lithograph prints. Saila's work often explores themes such as family, shamanism, birds, and her personal life experiences as an Inuk woman. Her work has been displayed in over 150 exhibitions nationally and internationally, such as in the acclaimed Isumavut exhibition called "The Artistic Expression of Nine Cape Dorset Women". In 2004, Pitaloosie Saila and her well-known husband and sculptor Pauta Saila were both inducted into the Royal Canadian Academy of Arts.

Siassie Kenneally was an Inuit artist from Cape Dorset (Kinngait), Northwest Territories (now Nunavut. Kenneally was known for her drawings. Kenneally was a cousin to Shuvinai Ashoona and Annie Pootoogook. She was the granddaughter of artists Sheouak Petaulassie and Pitseolak Ashoona.

Sharni Pootoogook (1922–2003) was an Inuit printmaker from Cape Dorset, Nunavut.

Eegyvudluk Pootoogook (1931-2000) was an Inuk printmaker and sculptor. He was married to the artist Napachie Pootoogook.

Wikimedia Commons has media related to Kinngait .
This page is based on this Wikipedia article
Text is available under the CC BY-SA 4.0 license; additional terms may apply.
Images, videos and audio are available under their respective licenses.